Out of This World: Area 5.1 Winery Makes Cosmic Splash in Funk Zone

By Gabe Saglie, Senior Editor, Travelzoo
(published in the Santa Barbara News-Press on 1/30/14)

“I didn’t necessarily need another winery to run, but I knew I couldn’t miss out on what was going on down here,” he says.

Brown is the marketing whiz behind Kalyra, the feel-good winery that set roots in the Santa Ynez Valley in the late 90s and enjoyed a starring role in the film Sideways before it launched its lower State Street tasting room in 2007.  The renaissance of the Funk Zone, right around the corner, began in earnest soon after – a rebirth that, today, is anchored by the property that houses The Lark, Les Marchands, Lucky Penny and a handful of libation ventures, including Brown’s Area 5.1.

Today, Brown marvels at what the Funk Zone has quickly become: “It’s cleaned up and is a fun destination now,” he says.  “It’s relaxed, and everybody’s really cool.  Not the older drinking crowd, not the college crowd, but something in between.”

And in that sweet spot somewhere in between, Area 5.1 has found the perfect launching pad.

The notion behind this new wine venture is quirky by design – it’s riddled with intergalactic motifs – and born from the fact that Brown and his winemaker brother, Mike, are foreigners themselves.

“It was a stupid concept, actually, that we came up with years ago after several glasses of red wine,” jests Brown, an Australian native.  “Several glasses,” he insists.

“We were looking at our new green cards, and they said we were now resident aliens.  And soon we started thinking that the concept could be really cool.  That Area 51, and aliens, could actually be a great name for a winery.  And after we mocked up some labels, we thought that this could really happen.”

The official name is Area 5.1 – five-point-one – though local wine fans are more likely to go with Area 51.   “But we didn’t want to get into trouble with other businesses that have the Area 51 name,” says Brown.  “Or the government.”

Area 51, of course, is the heavily-guarded remote zone in the Arizona desert that’s been at the center of UFO conspiracy theories for decades.  That out-of-this-world motif is pervasive at the Anacapa Street tasting room, from the tasting list presented in a manila folder stamped “Confidential” to the nomenclature on the labels – wines with names like “Close Encounter” and “Conspiracy Red.”  When I visited the tasting room earlier this week, I admired the underside of the entrance awning, which pays homage to the early days of America’s space program, the stark blue wall inside – like a vast night sky – and the tiny spaceship behind the bar.

“We’re bottling not just wines, but wine concepts,” Chad Nassif tells me as he starts my pours; he’s the tasting room manager, though his business card ID’s him as “Squadron Leader.”

And therein lays the vast space for creativity that Mike Brown and his crew of winemakers – including Kalyra assistant winemaker Matt Kowalczyk – have to work with.  The Area 5.1 lineup is driven by blends.  Ecclectic blends.  Unusual combinations of grapes.  But permutations that work.

“I go to Mike and tell him what we need,” says Brown, “and he goes out and makes it.”  It’s a combination of winemaking expertise and marketing knack that serves this label well. 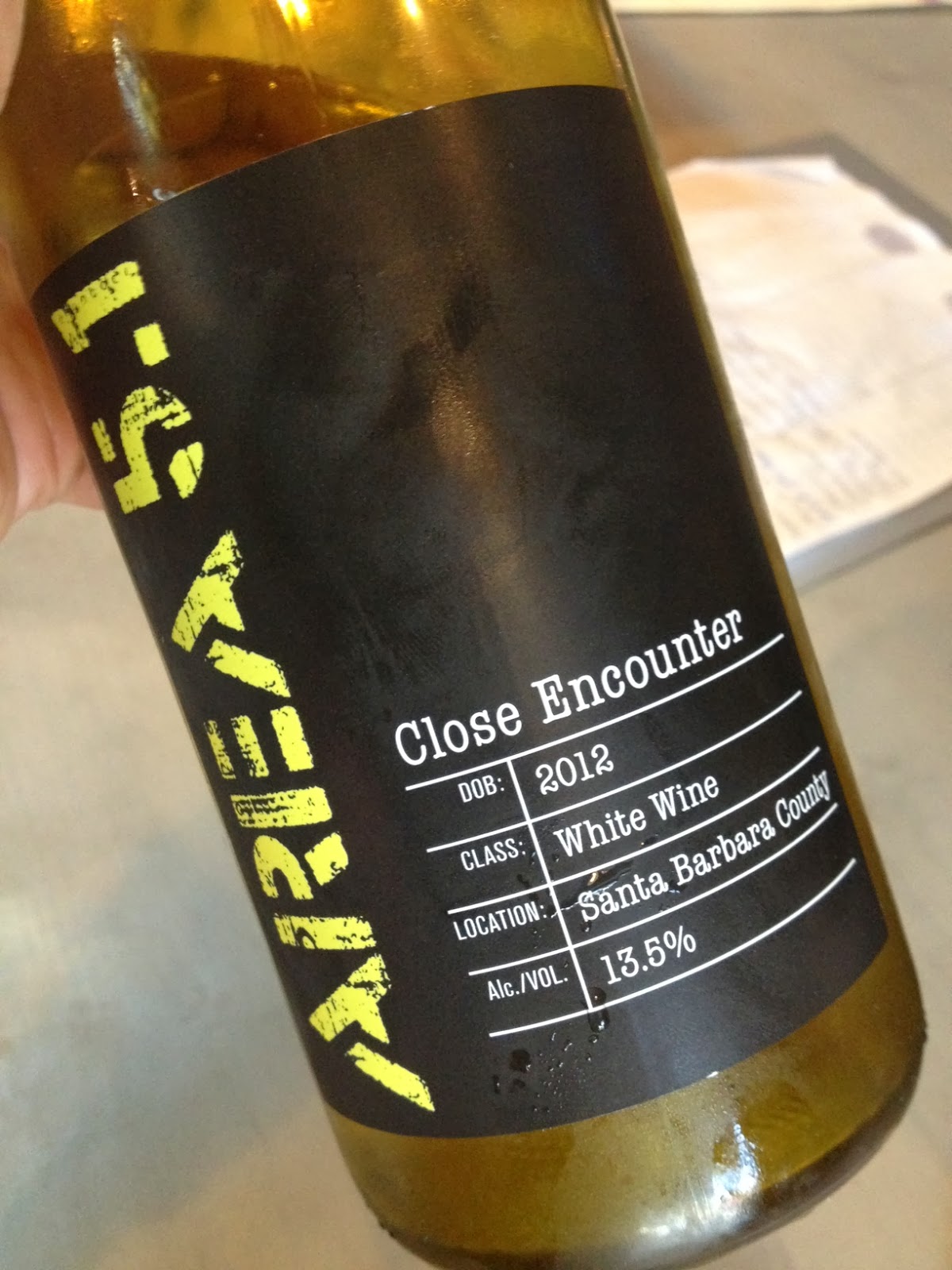 On the white front, the 2012 Close Encounter ($22) combines Grenache blanc and rousanne – grapes native to northern Rhone in France – with little-known loureiro, a grape native to northern Spain and grown in very limited quantity in Santa Barbara County.  Big fruit and a round mouth feel give way to a clean finish.

The 2012 Equinox ($24) is heavy on viognier, but the addition of rousanne, marsanne and albarino helps deliver a floral nose, guava flavors on the tongue and a refreshing finish.

A third white – White Light – is in barrel and slated for release soon. 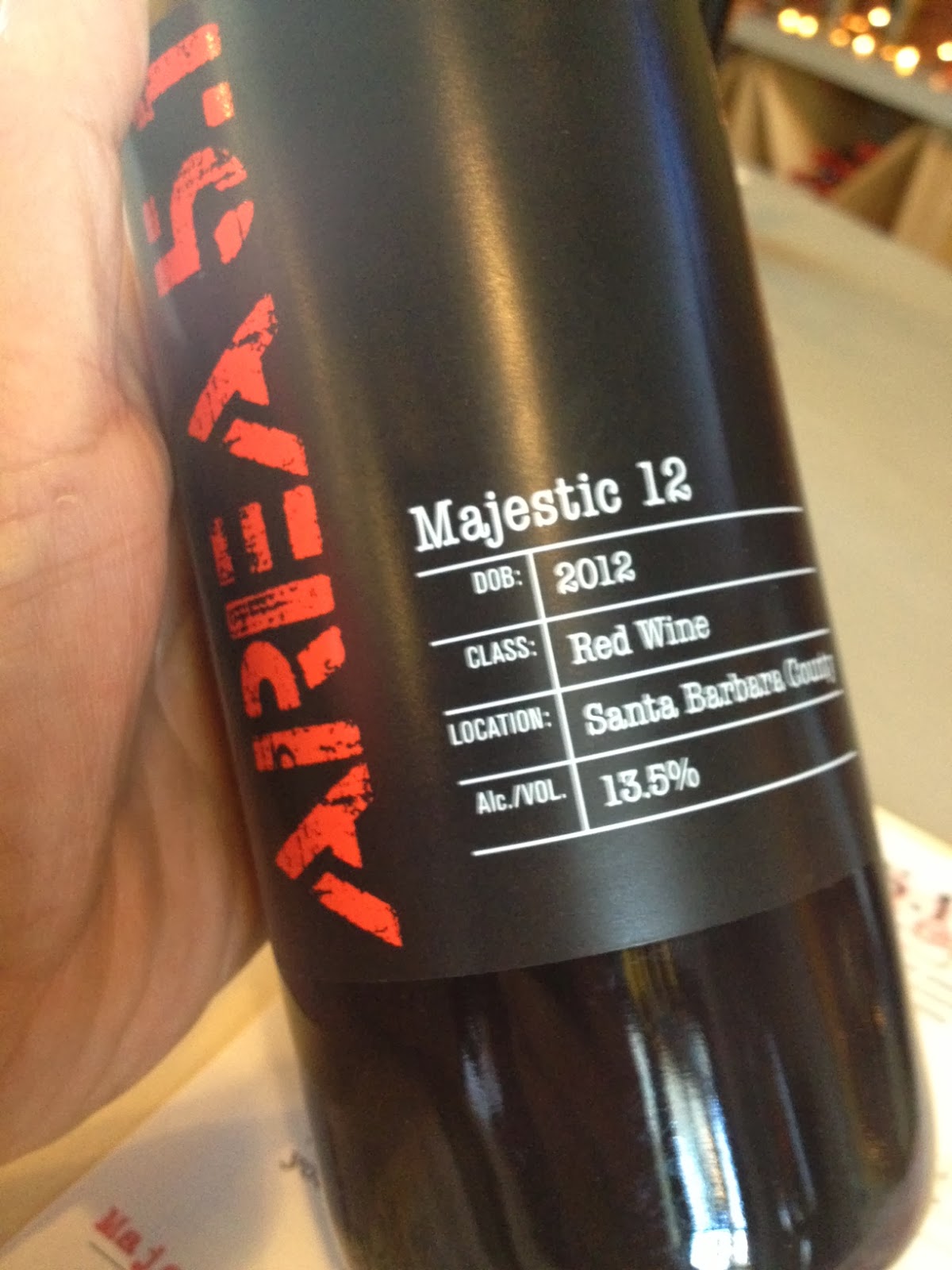 The reds all exhibit both drinkability and a wonderful potential to age.  The 2012 Majestic  ($28) – 25% each of sangiovese, barbera, nebbiolo and tempranillo – balances tart fruit and a buxom body beautifully.  And it illustrates the Area 5.1 vibe perfectly.  Fact is, creative blending means that bending the rules of winemaking is embraced here.  “Each wine is like a canvas,” Brown tells me.  So when the original Majestic release sold out – it was much heavier on the sangiovese – a totally new version was divined and released.  And for the consumer, the drinking experience remains new and fresh.

The 2011 Conspiracy Red ($28), which blends 50% syrah with equal parts merlot and cabernet, is rounded and supple, with a very pretty candied cherry nose.  And the 2012 Collusion – syrah-driven with splashes of mourvedre and Grenache sourced in Happy Canyon – is rich and meaty, with an herbal streak and blueberry tones.

The tasting roster – you pay $10 for five wines – doesn’t usually include a taste of the 2010 Declassified ($20, 375 ml.), the winery’s port-style dessert wine.  But Nassif treated a trio of tasters down the bar – visitors from Chicago – to a few sips, and they raved.  “And I am not a dessert wine person,” I heard one of them say.  Indeed, this wine, made with mostly-locally grown Portuguese grapes like Tinta Cao and Touriga Nacional, was delicious and, most importantly for me, wonderfully balanced.  At close to 19% alcohol, and with more than 12% residual sugar, it’s made to satisfy and impress.

And the tasting room, even through its deliberately quirky façade, hits on all the right points: ambiance, service, wine.  It stays open till 7pm weekdays and 8pm weekends, which draws many to enjoy wine by the glass here -- $6 for white and $8 for red.  The bar also sells a cheese plate for $15.  And they’ll premiere a chocolate tasting menu for $10 with a special event on Valentine’s Day, featuring the truffles of Santa Barbara’s Zuzu Candies.  Several private parties have been helped here, too, since its September opening; it can handle about 40 people.

“We want people to think of us as non-traditional, fun and not stuffy at all,” Nassif tells me.  Sure enough, the Browns have managed to create another unique experience here.  And once you take off, you won’t want to touch down any time soon.