Several Four Seasons Hotels have found an ingenious way to share their gourmet fare with the public: they’re taking it to the streets.
The Four Seasons Taste Truck, a four-wheel truck outfitted to resemble a classic woody and decked out with a bevy of gourmet cooking appliances, hit the road this week on a culinary pilgrimage.  By the end of its promotional run, which includes one-week stops at eight Four Seasons resorts, including the AAA 5-Diamond Four Seasons Resort The Biltmore Santa Barbara, it will have covered 1,133 miles across three states and over 55 days.  At each sojourn, the truck will become a kitchen-away-from-home for each property’s executive chef.


“I have about 50 cooks at the resort, so I don’t get to cook every meal,” says Executive Chef Alessandro Cartumini, who took the kitchen helm at the luxury hotel brand’s acclaimed Montecito property in 2010.  “But now I’ll be on the truck every day – just me and one sous chef – so I can tell guests that I cooked every one of your meals.  And that’s the exciting part for me.”
The Taste Truck turned its engines this week with a visit to the Four Seasons Hotel Silicon Valley at East Palo Alto; coincidentally, Chef Cartumini was part of this property’s launch in 2006, before transferring to the Biltmore.  Next week, it’ll pay a week-long visit to the 5-Star Four Seasons Hotel San Francisco before making the coastal drive south to Santa Barbara for a local visit September 30th through October 6th.  From there, it’ll visit Four Seasons properties in Westlake Village, Beverly Hills, Los Angeles, Scottsdale and Santa Fe.  (Find a detailed schedule here.)


While in town, Chef Cartumini will bring a bevy of dishes to the public by parking the Taste Truck at various venues.  In its first two days, it’ll welcome walk-ups along Butterfly Beach, right across from the resort.  In the days that follow, it’ll visit West Beach, the Santa Barbara Historical Museum, Telegraph Brewing Company, Santa Barbara’s Saturday morning farmers market, Oreana Winery in the Funk Zone and East Beach.  Times vary each day – twice, the chef will be doling out breakfast.  And there will some themed serving as well – on two days, the menu will include several Oktoberfest-inspired menu items.
﻿﻿﻿﻿﻿
The main drive behind this unique culinary promotion is “to make food accessible, to take our food out on the streets and to show people what we can do,” says Chef Cartumini.  “People sometimes think of a resort like ours just for a special occasion.  What we want to show is that we are not just a big corporation, but that we also embrace our community.”


Translating the daily production and presentation of award-winning fare from a gourmet kitchen to a food truck offers challenges, to be sure.  But for the Four Seasons The Biltmore’s director of food and beverage, Bixente Pery, “it’s all about thinking outside the box.”


﻿﻿The way the food is made inside the Taste Truck will employ the same techniques used onsite.  “The produce is the same, the chef is the same, the preparation is the same,” says Mr. Pery, who will be with the truck each day.  “We just eliminate the china and the silverware, but the final product is still the same.”
Many of the items featured in a specially-designed menu for the Taste Truck’s visit will come off menus featured on the Montecito property’s restaurants, including the Bella Vista and the Ty Lounge; other items were custom-made for the occasion.  But one thing that will be different will be the price tag: most offerings range from $4 to $7 and no item is priced over $9. 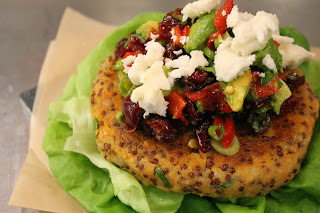 
“Of course there will be some bells and whistles, since this is the Four Seasons,” says Chef Cartumini.  “But for me, it’s going to just be about the food, about what you’ll get for your money and about showing the community what we are doing at the resort every day.”


The Taste Truck’s Santa Barbara visit will also include a cocktail giveaway at the resort’s Bella Vista Restaurant.  Guests who share a photo or video of the truck, or food from the truck, on Instagram, using the #FSTasteTruck hashtag and the resort’s @FSSantaBarbara handle, can show it to their server in return for a signature sipper of their choice.  The eatery will feature a special food and drinks Food Truck menu during the month of October. 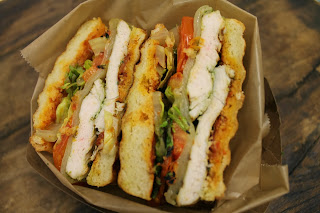 The truck’s local stint, in fact, coincides with the start of epicure.sb, Santa Barbara’s month-long culinary showcase, now in its fifth year, which will feature more than 100 events during the month of October.


In November, at the end of the Taste Truck’s 55-day tour, Four Seasons Hotels & Resorts will donate a portion of total proceeds to Chefs to End Hunger, a charity that benefits local food agencies.

By Gabe Saglie
(Published in the Santa Barbara News-Press on September 12, 2013)

The final touches are now going up at the tasting room for the brand new Avelina Winery in downtown Santa Barbara.  But nostalgic touches still prevail.  Like the old typewriter on the corner, which guests will use to join the mailing list.  And the sparkling jukebox by the front door, which feeds on quarters.  And the old 1959 GMC farm truck parked in the middle of the room, encircled by stools and its bed covered by wooden doors to create a no-frills, but very cool, wine bar.
Avelina is the brainchild of Christian Garvin, best known (until now) for Oreana, the Funk Zone winery that’s been drawing patrons as much with its wines as with its quirky events for almost a decade now.  Oreana changed hands about two months ago, when Garvin sold it to his friend and to his winemaker for the last eight years, Danny Miles.  The new proprietor will move forward with a brand that features pinot noir, syrah, chardonnay and a handful of affordably priced blends.


Garvin, himself, is now fully focused on Avelina.  He was ready for something new, he tells me.  A new creative outlet.

And although Avelina is brand new, it smacks of something nostalgic for its owner, too.  Avelina references Garvin’s Italian roots, for one.  “It’s a town so small, you can’t really find it on a map,” he says with a laugh.  It’s also a name Garvin used more than a dozen years ago on his first independent wine project – Kahn Winery – to denote a line of red wines.  “I bought the trademarked name back for $350,” he says.


The premiere release of Avelina wines – a 4000-case project with a focus on Italian varieties – includes a pinot grigio, sangiovese and freisa.  Its crowning jewel, though, may be a 2010 nebbiolo, sourced from the legendary Bien Nacido Vineyard in the Santa Maria Valley.  It’s supple, smooth and generous with its fruit flavors.  All the Avelina wines will sell for $25 in the tasting room. 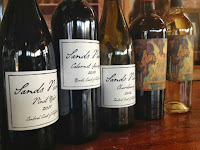 This project also includes a second label – Sands Point – which features non-Italian wines like chardonnay, pinot noir, merlot and cabernet sauvignon.  The price point on these is affordable by design – $15 a bottle, and probably less when it hits supermarket shelves – and will be available to taste at the winery, too.


Garvin made the first batch of Avelina wines at the Lucas & Lewellen Winery facility in Buellton.  But his downtown Santa Barbara space will feature all the winemaking equipment he’ll need moving forward.  Already, some gear, like fermentation eggs and a fruit crusher, grace the sleek, slip-resistant concrete floor.

﻿
Avelina’s new home is in the heart of the humming Funk Zone.  Across the street, actually, from Oreana, and flanked by the new Figueroa Mountain Brewery tasting room and the railroad tracks.  It’s in the same building as Santa Barbara’s brand new and most buzzed-about eatery, The Lark, in a space formerly used to process fresh fish.


Aside from the production of wines, Garvin’s vision for his new space hinges on tapping into the Funk Zone’s still-ballooning appeal: a social spot, a watering hole of sorts, with an outdoor courtyard and a spacious interior that will also be marketed for private events.  “We’ll have a large movie screen here,” he says, pointing to the ceiling above stacks of sealed cases, “and we’re getting a digital projector delivered for movie nights.”
Those who know Garvin probably expect neat things to come, including unique events and memorable promotions.  The 39-year-old, after all, is as much a winemaker as an entrepreneur, with a knack for drawing crowds to wine not merely for the sake of sipping but, instead, to let the good times roll.


Avelina is the newest member of Santa Barbara’s Urban Wine Trail (which now boasts 26 member wineries!) and is located 131 Anacapa Street.  Its grand opening party is Friday, September 20th.  For details, call the winery at 770-7210. 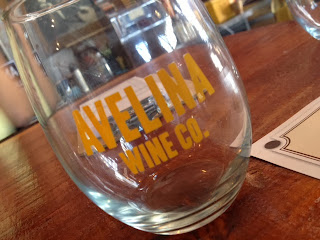