Beach in a Bottle: Malibu Gets Wine Growing Recognition

By Gabe Saglie, Senior Editor, Travelzoo
(published in the Santa Barbara News-Press on 7/19/14)

Malibu wine growers finally got the recognition they say they deserve: on July 18, the federal government granted AVA status to much of the posh coastal enclave.

As California’s newest AVA, or American Viticultural Area, the new branding confirms that the conditions within its boundaries – the soil, the climate – are unique in their ability to grow distinctive wine grapes.

Those who are growing wine grapes here “take it seriously, but most people don’t associate Malibu with grape growing,” admits vintner Elliott Dolin, whose backyard off Kanan Dume Road and about a mile from the beach is planted to about an acre of chardonnay.  “This now lends us credibility,” he adds.

Indeed, the new AVA status means that Malibu – already well known around the world for its gorgeous beaches and celebrity residents – can now begin touting itself as a legitimate wine producing region, just like the five AVAs in Santa Barbara County, including Sta. Rita Hills and Ballard Canyon.  Wineries here can now print the new Malibu Coast appellation on their labels; until now, they’ve had to use either Los Angeles County or simply California.

Specificity of place on a wine bottle could be a boon for the marketing of Malibu wines, too.

“The most important thing is getting additional placements,” says Mr. Dolin, who helped launch the AVA initiative three years ago.  “The new AVA means more exposure and means we can rely less on selling via restaurants and more through wine shops, where we get higher wholesale prices.  And it means more sales direct to consumers.”

Mr. Dolin and his wife planted their Dolin Malibu Estate Vineyards in 2006 and produce an estate chardonnay from their home fruit; the 2010 Dolin Estate Chardonnay won double gold in San Francisco.  They also source grapes like cabernet sauvignon and pinot noir from other Malibu estates and from Central Coast growers like Bien Nacido, Solomon Hills, and Talley Vineyards.  The wine is being made by Kirby Andersen, formerly of Gainey Vineyards in the Santa Ynez Valley and an Arroyo Grande-based consultant; agricultural consultation for this project comes from Kevin Wilkinson of Paso Robles-based Coastal Vineyard Services.

The Dolins join 51 other growers within the boundaries of the Malibu Coast AVA.  High-profile projects include The Malibu Vineyard, the private label pinot noir for renowned Michael’s Restaurant in Santa Monica, whose wines are made by Bruno D’Alfonso of D’Alfonso-Curran wines.  The Lompoc-based winemaker, who’s developed proprietary methods to help Malibu wine grapes combat moisture-driven ailments, says Malibu’s wine country legitimacy hinges on proper planting choices.  “Whites like chardonnay should be planted closer to the coast, because they don’t hang on the vine as long,” he told me recently.  “Reds hang longer and so have greater exposure to disease pressure from mold and mildew.”

Actor and filmmaker Emilio Estevez and his fiancé, winemaker Sonja Magdevski, produce a pinot noir from their backyard vineyard.  They were not involved in the AVA application process but did believe in it.  “That’s our ‘hood, that’s our home – so when you can create something and name it as such, it’s really powerful,” Ms. Magdevski says.  “You choose a location, you choose what you want to do, and you want to pick the most distinct name possible to represent your wine.”

Jim Palmer, a business manager who planted Malibu Vineyards in 1997 along Decker Canyon himself, agrees that the AVA adds credibility.   “Malibu is famous for movie stars and surfing beaches, but we can also be famous for creating world class wine,” he said when we chatted in May.  But he wonders if it’ll do anything for the prices he can charge, which have been capped by a weak economy.  Mr. Palmer’s wines retail for about $30 and the new AVA “still won’t get us $40 or $50 a bottle,” he says.  Malibu Vineyards is planted to syrah, cabernet sauvignon, cabernet franc, merlot and sangiovese.

For Malibu Rocky Oaks, a 37-acre estate perched high atop a pinnacle along the Santa Monica Mountains, the new AVA will bring attention to the unique topography that comes from its 2000-foot elevation and a precipitous landscape.   “When the hillside heats up, it heats the rocks and they release nutrients into the grapes,” owner Howard Leight told me.  “Even the winds we get up here move the leaves around, so they get maximum sun exposure.”  The property, whose sweeping Tuscan-style villa has been featured in movies like The Hangover 3 and TV shows like The Bachelorette and Keeping Up with the Kardashians, is planted to 10 acres of vines.


To leverage the renewed attention wrought by new AVA, Mr. Leight says he’ll finally start submitting his wines for review by Robert Parker, the uber-influential wine critic.  That kind of distinction, he thinks, would help bolster the regional commitment to making wine.  “We’re all sort of a team here, and the more people in Malibu who sell wine, the better.”

The Malibu Coast AVA is 46 miles long and eight miles wide, and its elevation ranges from sea level to 3100 feet.  It’s made up mainly of the Santa Monica Mountains, stretching as far north as Oxnard, as far inland as Newbury Park, as far east as the Hollywood Hills and as far south as Santa Monica.  Wine grapes – including cabernet sauvignon, syrah, merlot and chardonnay – encompass 198 acres.

The new Malibu Coast AVA contains two previously-existing AVAs: the Malibu-Newton Canyon AVA, relegated to the popular Rosenthal label and established in 1996, and the Saddle Rock-Malibu AVA, encompassing the wine projects of Malibu Family Vineyards (which runs a tasting room in Los Olivos) and which was designated in 2006.

by Gabe Saglie, Senior Editor, Travelzoo
(published in the Santa Barbara News-Press on 7/4/14)


This year’s Santa Barbara Wine Festival scored big,craising more than $75,000 this past Saturday, June 28th, for enrichment and kids’ education programs at the Santa Barbara Museum of Natural History.
As always, the museum’s Mission Creek campus proved a gorgeous backdrop for the 800 guests who visited one-on-one with the area’s top winemakers and chefs.
Some of my highlights: Larry Schaffer’s fruity and dry "The Outlier" gewürztraminer; watching legend Richard Sanford engage his fans; being introduced to several boutique producers by the Wine Hound’s Bob Wesley; sipping reserve Brander cabernet with winemaker Fabian Bravo; and trying to beat the strict 5pm cutoff with Martin Brown at the Area 5.1 table.

The 1996 and 1992 Whitcraft pinot noirs that winemaker Drake Whitcraft opened in his late father's honor tasted beautifully.
The festival was launched in 1978 by Chris Whictraft, Jim Fiolek and Ralph Auf der Heide.  It's produced by the museum's events manager, Meiridith Moore, and her dedicated team.  It returns next summer -- June 27, 2015 -- with specially discounted $70 tickets available now through the end of the year; contact the Santa Barbara Museum of Natural History at www.sbnature.org/tickets. 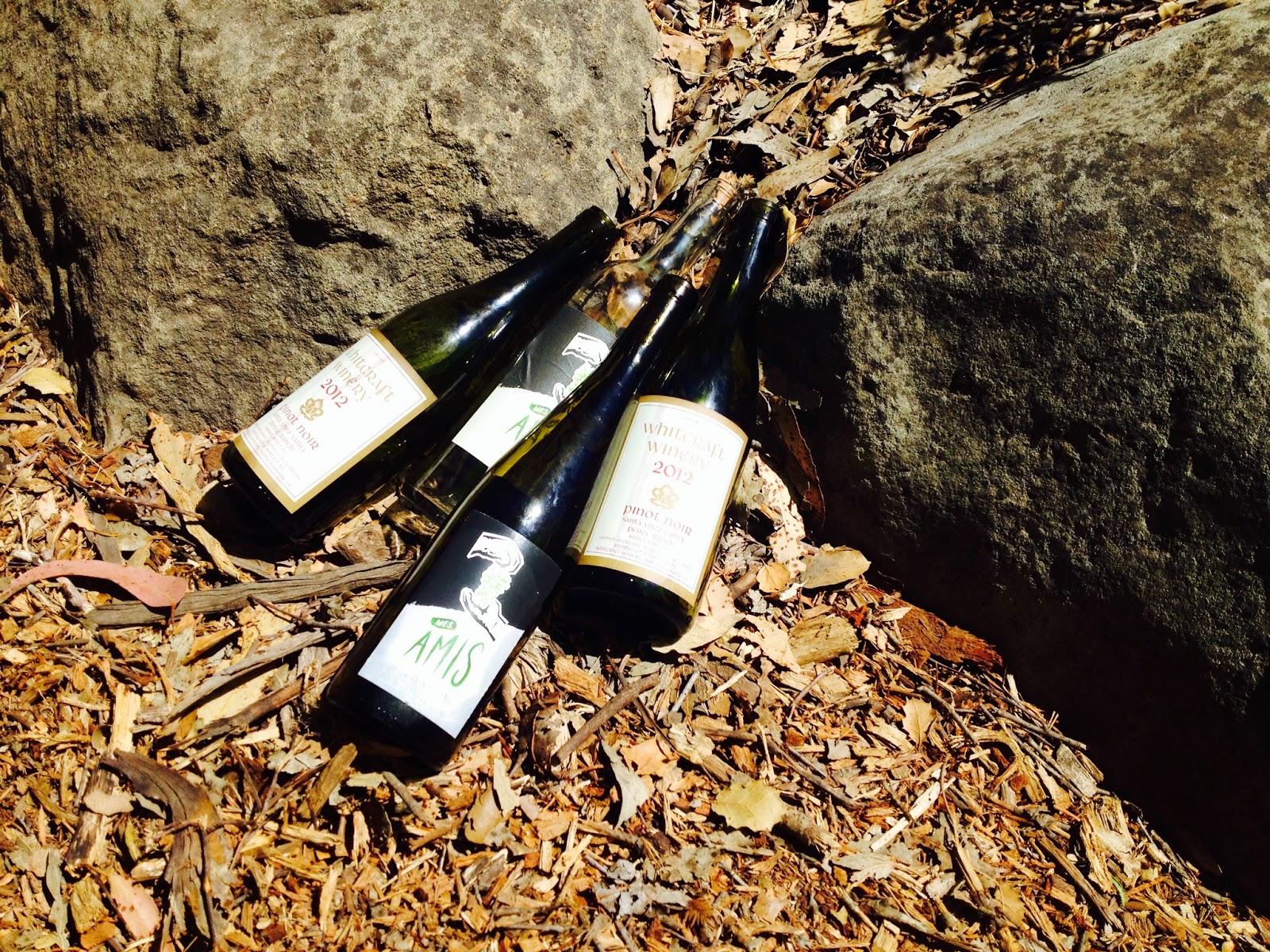