Come for the Giraffe, Stay for the Wine: Malibu Wine Hikes

The shattering effects of last year’s Woolsey Fire are not immediately obvious when you stroll through Saddlerock Ranch. The 1100-acre property along Mulholland Highway, home to the Semler family, is looking beautiful these days, especially after the bloom of spring, with its cavalcade of flowers and trees and a sweeping, undulating landscape of dramatic rock formations. The beaches of Malibu are seven miles away, and easy access off Highway 101 makes it an easy one-hour drive from Montecito.

But wreak havoc, the Woolsey Fire did, according to Kurt Rieback, who guided us on a leisurely hike through Saddlerock last month. “All the family and employee residences burned,” he tells us as we notice fleeting hints that fire, indeed, roared through this property last November. Numerous barns and an enviable collection of classic cars went up in smoke, too. As for the animals – more than 150 exotic specimens, from zebras to water buffalo to a giraffe with its own social media following, the evacuation of whom during the fire created quite the news frenzy – they’re all back home now, and they’re welcoming guests.
The vines tell a different story, though – or at least they might, once harvest happens this fall. There are 90 acres of grapevines here – eight different wine varieties – and because the fire raged through while they were still dormant, if and how they’ll blossom, and the quantity and quality of grapes they’ll produce, is yet to be seen. “We may have lost up to half of our vines,” Kurt tells us.
I first visited Malibu Wine Hikes last year when owner Shane Semler took me on the moderate two-mile hike. Malibu Wine Hikes is one of numerous onsite businesses run by various Semler children – Shane is one of nine. Weekend weddings are a constant here. And Malibu Wine Safaris, run by Shane’s brother, is probably the most well-known adventure, drawing a sell-out 21-and-over crowd year-round.
The Wine Hikes, though, are the most family-friendly way to visit this property – no age minimums. And the leisurely pace and expansive views make this a truly special way to experience the natural wonders of the Santa Monica Mountains.
“I used to play on this property when I was growing up, and I had a lot of ground to cover,” Shane, 32, told me. “Today, I’m doing the same thing I used to do as a kid – I just get to bring guests along to enjoy it with me.”


Shane explains that his older sister’s love for riding horses is what inspired their parents to purchase this property, a former Arabian horse ranch, in the late 1970s. Exotic animals soon arrived – llamas and camels at first, and then a zebra mating pair that was a gift from Shane’s dad, Ron, to his wife, Lisa. Stanley the Giraffe joined the menagerie in 2015 and today, at age nine, remains the biggest attraction on four legs. A former Hollywood star – Jurassic Park and Hangover 3 appear on his résumé – Stanley was acquired by the Semlers when he became too big to transport between film shoots and now enjoys a new kind of fame  -- more than 53,000 Instagram followers for @a_giraffe-named-stanley. You can hand-feed vegetable snacks to most animals during the hikes.
For me, the best part of our family hike last month was the respite between the animal petting and the vineyard stroll when, on a rustic deck overlooking flowering gardens and a natural lake that provides much of the property’s water for irrigation, we pause for wine. This is where hikers are introduced to the Semlers’ wine business -- a two-label project that produces some 45,000 cases of wine a year. A third of that, on the eponymous Semler label, is made from grapes grown onsite, including Rhone varieties like syrah and grenache; these wines snapshot both the potential and challenges of a growing area defined by a regular tug-of-war between ocean breezes and heat spells . The bulk of the production, and perhaps the most dependably solid wines, are on the Saddlerock label, which sources grapes from all over California, from Santa Barbara to Lodi. 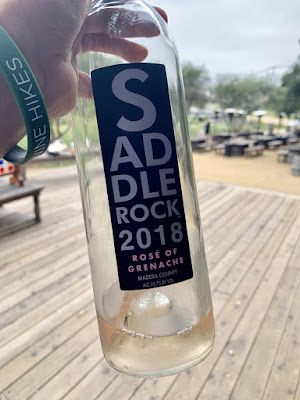 The 2017 Saddlerock Sauvignon Blanc ($45) was clean and lively, with pear and melon notes, thanks to its fermentation in stainless steel tanks. The 2018 Rosé of Grenache ($48), with its salmon hue, was as pretty as it was refreshing, with lots of watermelon and berry notes. The 2013 Saddlerock Semler Estate Reserve Cabernet Sauvignon ($95) we supped was smooth, jammy and complex.
Our tasting stop actually replaces the usual wine portion of this experience -- a post-hike visit to the tasting room across the street. Damage from the Woolsey Fire forced refurbishments that have since been completed, but an inspections backlog is keeping it shuttered for now. That said, as hip as the tasting room is, I prefer the bucolic, unhurried aspect of our midway sip stop.
Our Malibu Wine Hikes experience lasted just under three hours. Offered multiple times a day every Wednesday through Sunday, I recommend the morning options, since the afternoons can get pretty hot. Pricing is $35 per person, or $65 if you want to include a visit with Stanley (and you should). Ask about Flight of Voices, a monthly reimagining of the Hikes that features live musical interludes along the way, and about the summertime Saddlerock Garden Dinners, held en plein air and featuring a rotating lineup of chefs. The Semlers’ new Malibu Wines & Beer Garden in West Hill is open daily. Go to malibuwinehikes.com for more info.
Cheers!
###
Posted by Gabe at 11:40 AM No comments:


For these five bartenders, this was a tall order, indeed: create a mixed drink that encapsulates the essence, the beauty and the charm of Santa Barbara. They shook and muddle and stirred, and at the end of this annual bartender contest, The Lark came out on top. Their “Sticky Fingers,” a gin- and mezcal- based cocktail made with foraged herbs and honey, is 2019’s “Official Drink of Santa Barbara.”

“What happens when you stick your hand in honey?” Lark mixologist Nick Priedite yelled out to the thirsty, sellout crowd of 300 that descended on El Paseo Restaurant last Thursday Their retort: “Sticky fingers!”
“To me,” Priedite continued, “Santa Barbara is one big bowl of honey!”
That enthusiasm, combined with an animated cocktail-making demo and impassioned description of how “Sticky Fingers” is a liquid snapshot of the coastal enclave affectionately known as The American Riviera, clinched The Lark the win, beating out talented bartender teams from The Angel Oak at The Ritz-Carlton Bacara, Convivo, Finch & Fork and Finney’s.
This was the 3rd annual Official Drink of Santa Barbara Cocktail Competition, an event celebrating the city’s burgeoning mixed drink scene and one that I’ve had the good fortune of emceeing each year. Presented by Visit Santa Barbara, the event is many weeks in the making, with calls put out months ago for recipe submissions, a weeks-long online voting event run by the Santa Barbara Independent and the culminating night of competition featuring the top five vote-getters.
Participating barkeeps were tasked with drawing inspiration from Santa Barbara’s landscape, architecture and culinary scene, and with using local ingredients. Base spirits were provided by Cutler’s Artisan Spirits, one of the contest’s founding sponsors.
“Sticky Fingers” calls for Cutler’s gin infused with bay laurel, then combined with mezcal, tequila’s smoky sister. Fresh lemon juice and avocado blossom honey blend to balance citrus and sweet. A bitter dash from Amaro Meletti is tempered by a splash of orange flower water. A single avocado leaf, afloat, garnishes the blonde beverage, which is served over ice. It’s pretty, refreshing and complex at once – indeed, a lot like Santa Barbara itself, you could say.
The Lark’s entry took the win by impressing a lineup of five judges, including KEYT Senior Reporter John Palminteri, local wine writers Matt Kettmann and Hana-Lee Sedgwick, and Instagrammer Sarah Chhum, who won her chance to sip and judge through a public guest judge contest. The fifth judge earned his seat last year, when his own craft cocktail won the coveted Official Drink of Santa Barbara title.
“It definitely made a huge difference,” Ty Lounge mixologist Tyler Ondatje said about the effects of the publicity generated by his 2018 score: the past year has seen a steady stream of patrons ordering the “Biltmore Fuerte” by name.
The Biltmore’s winning cocktail – “fuerte” is Spanish for “strong” – was inspired by the Montecito community’s resilience in the wake of the January mudslides. The sipper features Cutler’s bourbon, lemon juice, strawberry purée and honey made by bees rescued from the Thomas Fire. And the response over the past year “has been overwhelming,” echoed Biltmore GM Karen Earp, who cheered competitors from the audience. She also confirmed that the Biltmore Fuerte would remain on the Ty Lounge menu.
“Sticky Fingers” earns a slew of prizes, biggest being heightened exposure through Visit Santa Barbara’s myriad marketing channels. You’ll find it on The Lark’s cocktail list right now.
And there was a second winning spirit this night: the People’s Choice honor, determined through a texting platform that recorded real-time votes from attendees, who got to sip samples of all five entries. The barkeeps at Finch & Fork inside the Canary Hotel nabbed that one. Their “Eucalyptus Lane” combined Cutler’s gin, vermouth and citrus for a bright, quenching drink playfully topped with eucalyptus-tangerine foam.
Cheers!
###
Posted by Gabe at 8:15 AM No comments: