﻿
Executive Chef Peter Lee doesn’t wear his heart on his sleeve. It’s on the plate.

“I’m here to please,” says the man who runs the kitchen at Santa Barbara’s newest dining hotspot, Loquita.  That’s why, after he deliberately adorns a dish, “I like to follow the plate all the way to the table, until the serves sets it down, and watch for the guest’s reaction.”

That’ll be even easier for Chef Lee to do now, since the exhibition kitchen at Loquita – which is framed by a walnut-wrapped picture window – is wide open.  Diners at the six-seater Chef’s Counter get premium views of cooks working on state-of-the-art equipment.  But the kitchen action is easy to watch from main dining room, too, which is adorned with brass trims, vintage light fixtures, cozy banquettes, white-wash brick walls and Nicaraguan cement floor tiles.  The doors are salvaged from an old German monastery and the 19th century oil painting of St. Barbara on the wall once hung in a church in Argentina.  A stand-up counter separates the main room from the large walnut bar, with its 12 leather-tufted stools and framed mirrors.  A vault door leads outside to a white stucco patio decked out in wrought-iron chairs, jacaranda trees and stringed lights above. 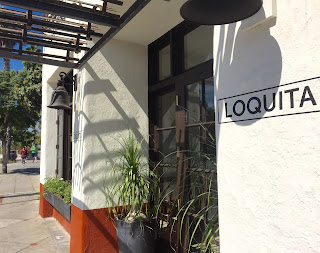 Like the restaurant he’s helming, Chef Lee, 30, is new to Santa Barbara.  “I moved here three months ago,” says the Bay Area native who was at foodie-friendly Eldorado Kitchen in Sonoma and celeb-friendly Osteria Mozza in Los Angeles before working, most recently, at award-winning Joël Robuchon in Las Vegas.  Loquita, located right on State Street at the threshold of the Funk Zone and just two blocks from the ocean, opened in late September.

Loquita – the Spanish word refers to a young, jovial young girl – pays homage to Santa Barbara’s colonial history and youthful vibe with food and drinks inspired by Spain.  For Chef Lee, Spanish cuisine “always makes you feel like you’re at somebody’s home.  So our concept is to keep it as authentic as possible, but with a California twist to tailor it to our tastes.”

The Loquita menu is diverse yet refreshingly succinct.  The star dish here is the paella, the traditional slow-cooked rice dish that’s simmered in broth and festooned with add-ons like chicken, sausage, seafood, vegetables and spices.  The key to great paella is the rice, says Chef Lee, who field-tested several imported brands before settling on the Santo Tomas brand from Valencia.  The menu offers three paella preparations ($23-$41). 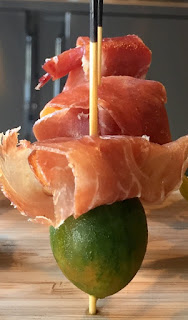 Finger-friendly items include the short “pintxos” skewers ($2 each) that are prepped with a variety of cured and pickled items “for pops of flavor” and “maximum one-bite impact,” says Chef Lee.  The “Date” features a Medjool date stuffed with the Spanish blue cheese “valdeon” and wrapped in thinly-sliced chorizo. 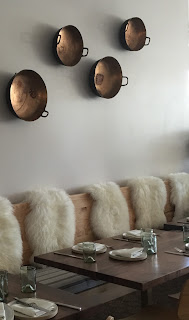 The charcuterie and cheese selections ($7-$21) include Spanish staples like Serrano and Iberico hams, 12-month old manchego and the delectably sweet quince paste known as “membrillo.”  The dozen-or-so tapas dishes ($4-$17) are meant for sharing.

Most of the main dishes come off an impressive wood-fire grill and include Spanish octopus in a black garlic aioli with potato and red onion ($21), Sonoma Valley lamb chops with eggplant and tomato ($34) and a 16-oz. prime ribeye with a traditional chermoula marinade ($47).

And among the early dessert favorites: the homemade churros ($9) served with chocolate, raspberry and dulce de leche dipping sauces.

﻿﻿﻿﻿﻿﻿﻿﻿﻿﻿﻿﻿﻿﻿﻿﻿﻿﻿﻿﻿﻿﻿﻿﻿﻿﻿﻿
Chef Lee says the menu will certainly evolve, driven by the seasons as well as customer response.  The key to successful service won’t change, though: “We show up early, prep, prep, prep and talk a lot through the process,” says Chef Lee.  His 10-member kitchen staff includes three sous-chefs he hand-picked from his previous restaurant jobs in L.A. and Vegas, including his longtime girlfriend, 26-year-old Chef Felicia Medina.  “I have the utmost confidence in my team,” adds Chef Lee.

﻿﻿﻿﻿﻿﻿The bar menu is worth noting, too, for its impressive lineup of Spanish and Santa Barbara wines and a cocktail list heavy on Spanish staples like gin-and-tonics, vermouths and farmers’ market sangrias.

In what is a first for any Santa Barbara winery, Pali Wine Co. is spreading south.

The popular premium wine producer already has a presence on the Central Coast, with tasting rooms in both Lompoc and downtown Santa Barbara’s buzzy Funk Zone.  This past weekend, Pali opened up a much-anticipated tasting room in San Diego’s vibrant Little Italy neighborhood.  And by this time next year, it plans welcome wine seekers with tasting rooms in Anaheim and the thriving Arts District in Downtown L.A.

“Our biggest goal is to increase our direct-to-consumer sales,” Pali winemaker Aaron Walker told me this week.  The winery currently leans on distributors to sell its wines, with margins that are comparatively slimmer.  Tasting rooms allow wineries to circumvent third-party distribution and sell wines straight to the public, allowing for bigger profits, more wine club sign-pus and better image control.


“Our Santa Barbara tasting room has done very well in the last four years,” Walker continues, “so our owners are making a real push to replicate that model in similar neighborhoods."

Indeed, the success of Pali’s expansion will hinge in large part on location.  Think of the dramatic rise in appeal of Santa Barbara’s Funk Zone; an area once avoided by most locals now attracts steady foot traffic with hip happenings and stylish storefronts both day and night.  Little Italy, just north of downtown San Diego, is similar in its appeal, with vibrant culture, trendy restaurants and stylish stores all rolled into one.  Anaheim, famous forever for little more than Disneyland, is in the midst of a significant revamp which has led to a new batch of culinary and entertainment venues, from craft breweries to vintage shops.  And the Arts District, a once-gritty industrial zone in the eastern edge of Downtown L.A., now features a thriving street scene and a bevy of eclectic shops.

Pali’s San Diego tasting room is on Little Italy’s tourist-friendly India Street and features its various vineyard- and appellation-specific pinot noir and chardonnay wines, as well as Central Coast Rhone and Bordeaux varieties from its sister label, Tower 15.  The facility also offers eight rotating wines on tap, both for wines-by-the-glass and refills under Pali’s popular growler program.  A small-plate menu is also available, with items like charcuterie boards and seasonal, regional selections of snacks and fruits.  The space was also designed with a small wine-production space, which will allow Walker to build on a wine program launched last year that sources grapes from northeastern San Diego County.  “It’s our way of offering our wide range of wines while also keeping these locations local,” adds Walker, a San Diego State grad who lived in San Diego for 12 years before moving to Santa Barbara to make wine.  This year marks his 10th harvest with Pali Wine Co. 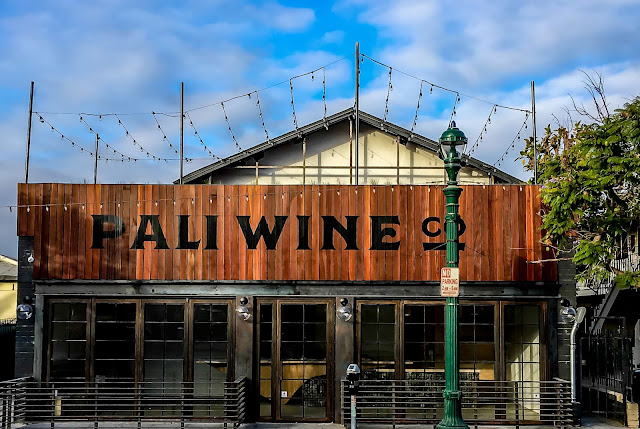 Leveraging the appeal of small neighborhoods has always been part of the Pali persona, actually.  “Pali” is the colloquial nickname for Pacific Palisades, the seaside Southern California hometown of co-founders Tim Perr and Scott Knight (and this writer, coincidentally).  Many of their wines even bear the names of quaint Palisades communities, like Huntington, Bluffs and Riviera.  The label makes about 20,000 cases of wine a year out of its state-of-the-art Lompoc winery.

Find out more at paliwineco.com.