When the mud that devoured Montecito oozed onto Coast Village Road, business at Richie the Barber, like at dozens of its neighbors, vanished.
“We didn’t know what we were going to do, we didn’t have a game plan,” says the man who goes simply by Richie, who launched what’s become one of Santa Barbara’s most popular barber shops in 2010. With no time frame, still, as to when storefronts along the popular thoroughfare will be able to reopen, “we thought we’d just have to wait it out,” he says.

Meantime, up the road in Santa Barbara, Jamie Slone’s business was hurting badly, too, and for a while. “During the fires, smoke suffocated the local area, nobody wanted to go out, nobody wanted to come up [from L.A.],” says Mr. Slone, who launched Jamie Slone Wines in 2014 and who runs one of the handful of upscale tasting rooms in the El Presidio neighborhood.
“We got a little breather over New Year’s, a teaser,” he continues. “But then this awful mudslide disaster hit, and it’s been ‘game over’ ever since.” 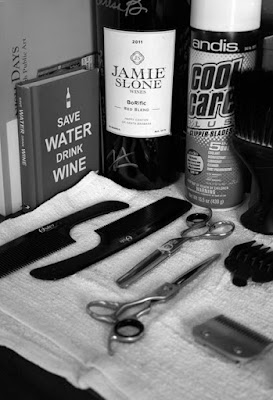 There’s little that connected these local businesses just a few weeks ago. Richie the Barber and Jamie, the vintner, didn’t know each other. But then natural disaster struck them both. And it would  take the ingenious inkling of a mutual friend – “Brandon Arlington from CDB Group – love him!” says Mr. Slone – to bring them together and create opportunity for both.
For the past week, Richie’s has been running a pop-up barber shop inside Mr. Slone’s tasting room. With chairs borrowed from a nearby business, the six barbers who work regularly at Richie’s have been back at work, welcoming clients and trimming hair. “Many of our regulars are displaced, and a lot of people aren’t aware yet that we’re here,” says Richie the Barber, so business is not what it used to be. The team – Richie, Alexis, Erin, Stephanie, Jessica and Martine, all Santa Barbara residents – have been doing about 25 to 30 haircuts a day, almost half the 45 to 50 they usually do. Under the circumstances, though, it’s a boon nonetheless.
“The way everything’s worked out, it’s perfect,” says the barber.
Mr. Slone calls it a simple case of “people helping people,” something that seems extra special in Santa Barbara, “where the degrees of separation between people are so small,” he says.
Jamie Slone Wines has given up its Private Reserve Room for the Richie’s team -- an elegant, glass-enclosed space behind the bar where Mr. Slone offers by-appointment tastings and a variety of wine education classes and experiences. But the temporary barber shop has generated unexpected benefits for the winery, too, as many who’ve come in for a trim stick around for a sip.
“People have been very gracious,” says Mr. Slone. “They come early and taste, or they’ll buy wines to take home. They discover what we do!” Jamie Slone Wines produces about 1000 cases of locally sourced wines like sauvignon blanc, chardonnay, pinot noir and cabernet sauvignon, as well as several blends; they’re made by celebrated winemaker, Steve Clifton.
﻿﻿﻿﻿﻿

﻿﻿﻿﻿﻿
“Overall, though, this is about doing something that feels good for our community,” says Mr. Slone, who’s had other Montecito businesses approach him about creating similar opportunities. “There’s a need for more of this kind of thing right now.”
And on a personal level, Mr. Slone’s found someone new to do his hair. “Turns out, I’ve been missing out on the Richie’s experience!” he says, with a laugh. “I’m definitely a fan moving forward.”
Richie’s Barber Shop inside Jamie Slone Wines is currently open seven days a week from 10am to 6pm.
Richie’s Barber Shop at Jamie Slone Wines, 23 De La Guerra Street, Santa Barbara. For haircut appointments: 805-845-9701 or 805-304-6697. For the tasting room: 805-560-6555.
Want more wine, food & travel news? Follow me on Twitter and Instagram!
###
Posted by Gabe at 11:09 AM No comments: 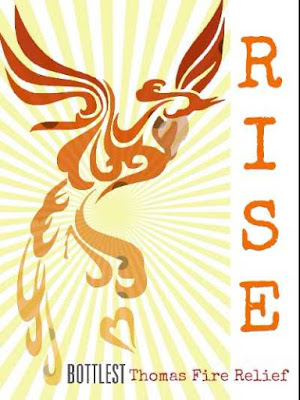 Bottlest Winery, Bar & Bistro in Buellton has created two limited edition wines aimed directly at fundraising for fire and mudslide victims. The “Rise” wines – a chardonnay and a cabernet sauvignon – sell for $20, with $15 from each sale earmarked for Direct Relief. The well-known Goleta-based aid group with remarkable international reach has had staff on the ground since early December, mobilizing support, providing free vaccines and working alongside the Red Cross and Santa Barbara County’s Public Health and Emergency Services Departments.

“We consider all of Santa Barbara County our local community,” says Bart Jones, general manager at Botllest. “We just felt an obligation to do anything we could to help out. And what better way to do that than by doing what we specialize in?”
The Bottlest team describes the 2014 chardonnay as medium-bodied, fruity and off-dry, with moderate oak; the 2014 cab is full-bodied, earthy and spicy, with “dark chocolate notes.” Both wines feature a rising Phoenix on their labels to signify Santa Barbara’s inevitable rise from these tragedies. They can be purchased in person (35 Industrial Way in Buellton) or online. The wines went on sale on Sunday, January 14.
In October, Bottlest produced a limited run of “California Strong” wines to benefit recovery efforts after the wildfires in Napa and Sonoma. As part of Terravant Wine Company, the largest winemaking facility in Santa Barbara County, Bottlest allows consumers to custom craft their own wine and design their own label; the onsite restaurant provides some of the very best dining in the Santa Ynez Valley.
###
Posted by Gabe at 2:52 PM 1 comment: