A recent dinner hosted by U.S. Secretary of State Rex Tillerson was a real feather in the cap for one Santa Barbara County winery.

Two wines from Solomon Hills Estate – a 2013 chardonnay and a 2012 pinot noir – were poured during a Valentine’s Day meal thrown by Mr. Tillerson for Israeli Prime Minister Benjamin Netanyahu, who was on a diplomatic visit to the U.S.  The wines were made by Trey Fletcher and were sourced from Solomon Hills, the western-most vineyard in the Santa Maria Valley.  They were hand-picked for the sit-down affair by State Department Executive Chef Jason Larkin.

“It is a great honor,” says Will Costello, a master sommelier who was recently named brand ambassador for Solomon Hills and its sister wine label, Bien Nacido.  “Our government didn’t just choose expensive wines but, rather, wines that were reflective of great quality and food-friendliness.”

The chardonnay was paired with the first course, a cauliflower velouté with porcini mushrooms and crispy parsnips.  The pinot was poured with the main course that followed, a monkfish “osso buco” served with a smoked tomato-saffron broth and stewed heirloom beans.

“The combination of long warm days with cool ocean breezes imparts on the Solomon Hills wines a common thread: they’re bright and fresh, with intense fruit flavors and lower alcohols,” says Mr. Costello, 34.  “They’re what consumers are looking for these days – it’s not bombastic, oaky, high-alcohol wines anymore.  And these aren’t porch sippers or cocktail wines.  They’re meant for food.”

Solomon Hills, like Bien Nacido, has long been regarded a premier grape growing site in California; its fruit is hotly sought-after by winemakers who proudly distinguish the vineyard by name on their labels.  Recently, its owners, Santa Barbara’s Miller family, which has been cultivating wine grapes in the Santa Maria Valley since the mid-1970s, decided to earmark two percent of each vintage for its own eponymous production.  That translates to only 180 cases of chardonnay and 150 cases of pinot noir each year, making these Solomon Hills wines especially desirable.


A few bottles of the 2012 pinot remain at the Bien Nacido/Solomon Hills tasting room in Los Olivos.  Otherwise, newer vintages of each wine are currently in the marketplace, with the 2014 chardonnay retailing for $45 and the 2013 pinot noir for $65.  They can be purchased directly through the winery’s website, www.biennacidoestate.com.

The State Department nod is a boon for the local wine industry as a whole, admits Mr. Costello, who ran the wine programs at the 5-Star Mandarin Oriental in Las Vegas and the 5-Star Fairmont Grand Del Mar in San Diego before joining the Millers’ Thornhill Companies.  He calls Santa Barbara County “a teenage wine region,” compared to older growing sites like Napa and Bordeaux.  “That creates lots of upside potential, both for branding and winemaking, and its makes the wines a great opportunity for value.”

The wines were certainly a political hit: Secretary Tillerson took several unopened bottles with him on a consular trip to Germany the next day.


You could say that the syrah Brad Schuette is pouring these days was 50 years in the making.

“I’m telling our staff and guests that it pairs perfectly with our Teriyaki Ribeye,” says the general manager and head bartender at Chuck’s of Hawaii Steakhouse in Santa Barbara.  The 11-ounce piece of prime beef, marinated in tangy-sweet house made teriyaki sauce and charbroiled to order, is one of Chuck’s hottest dinner items.  “The wine has all the varietal character it needs to stand up to the steak.” 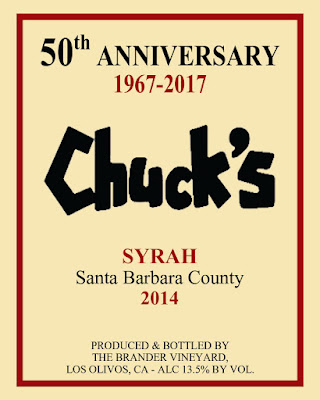 The wine is a 2014 syrah by renowned vintner Fred Brander and Brander Vineyards winemaker Fabian Bravo.  The fruit for this all-syrah bottling came from the legendary Zaca Mesa vineyard in Foxen Canyon, and the wine spent 14 months in American oak barrels.  It is a delicious syrah – a nice balance of fruit and earth that makes it especially well-suited to pretty much any protein on the Chuck’s menu, whether it’s the eight-ounce filet mignon, the 12-oz. prime top sirloin or the 18-oz. center cut T-Bone.  Ripe berries and black cherries upfront and mid-palate give way to smoky vanilla flavors and elegant tannins.

The wine’s merits aside, what makes it special for Schuette and his team is what it celebrates.  This is the official bottle marking Chuck’s 50th anniversary, a remarkable milestone in a foodie-friendly town where few eateries survive the test of time.  A lot of that has to do with the Chuck’s philosophy, which rings as true today as when Larry Stone opened its doors on Upper State Street back in 1967: quality steaks in a casual setting.  The people who’ve clocked in here over the decades have much to do with Chuck’s success, too.

Schuette has worked at Chuck’s for a whopping 37 years.  A legend of Santa Barbara’s culinary scene, you could say.  And someone who keeps his clientele foremost in mind when putting together Chuck’s wine list.

“I’ve got people who come in here and want a glass of red whatever, and then there are others who want something specific and high end,” says Schuette.  “I want to be able to take care of both.”

Schuette recalls that Chuck’s started to get serious about wine in the mid-1980’s, an effort driven by Stone’s business partner, Steve Hyslop.  Investment in equipment, like temperature-controlled units and nitrogen preserver-dispensers, allowed the wine-by-the-glass to flourish.  Santa Barbara’s wine industry has blossomed simultaneously in the 20-or-so years since, giving Schuette plenty more to choose from.  “I always prefer to do local stuff,” he says, “although I have a little bit of everything.

Many of Scheutte’s choices are personal, driven by his friendships with winemakers and wine reps who come to Chuck’s for dinner often.  The Jalama Canyon Ranch pinot, for example, is the pet project of vintner Wayne Siemens, a regular.  The only California tempranillo on the list is by Rick Longoria, who supped here just last week.  And the Cloud’s Rest Femme Fatale pinot out of Sonoma is a venture by Schuette’s brother, Scott.  Local labels like Fess Parker, Summerland, Au Bon Climat, Qupe and Margerum are complemented by Northern California whites and reds by labels like Stags Leap, Caymus, Rombauer, Duckhorn and Opus One.

Brander, a local pioneer who just celebrated his own 40th anniversary making wine in Los Olivos, makes several appearances on the Chuck’s wine list.  The sauvignon blanc and the reserve cabernet are top sellers.  But it’s Brander's latest syrah that’ll likely get the most play this milestone year.  “We’ll be coming up with a variety of specials to promote the wine throughout the year,” Scuhette tells me.

Currently, the 50th Anniversary Chuck’s Syrah sells by the glass for $9.50 and by the bottle – along with two limited edition golden anniversary logo glasses – for $50.

In the Mood for Merlot? One Santa Barbara Winery is Banking on It

“Merlot got a bad rap in that movie,” he says.  “Merlot became tough to sell, and California vineyards went ahead and removed 25,000 acres of merlot by either grafting or replanting.”  Lucas & Lewellen – the winery that Lucas started with retired Superior Court Judge Royce Lewellen in 1996 – took a cue from Sideways and beefed up its pinot production, too. 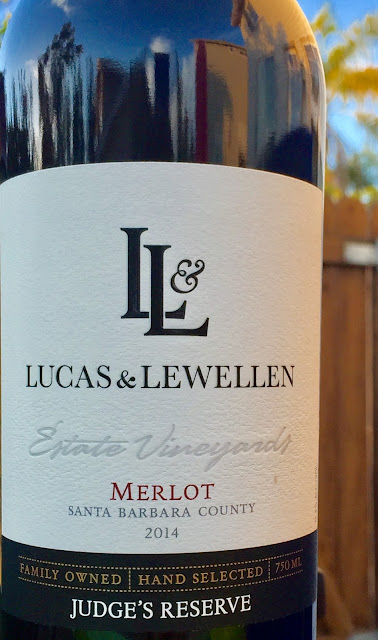 But Lucas is putting the spotlight back on merlot now, in part because “it’s definitely making a comeback” with consumers.  He’s putting his money where his mouth is, in fact, having just released a 2014 merlot he calls “Judge’s Reserve.”  At $58 a bottle, it’s the priciest wine in the Lucas & Lewellen portfolio.  And based on club members’ reaction to barrel samples early on, it’s the first wine the winery has ever pre-sold.  “We sold 50 cases while the wine was still in barrel,” Lucas says.

The Judge’s Reserve, an homage to Lucas’ longtime friend and business partner, marks the renowned grower’s “renewed interest in merlot.”  It’s a new focus that goes beyond an uptick in consumer attention, though, and one that emerged straight from the vine.

“I was driving around vineyard in 2014 and saw a spot I really liked,” Lucas recounts.  “It was exceptional – grape maturity, uniformity of the vines, the flavors were great.”  The block, growing by a creek and in clay soils speckled with rocks, reminded Lucas a lot of Petrus, the famed Bordeaux producer whose legendary wine, like the Judge’s Reserve, is 100% merlot.  And the vineyard’s location in mild, marine-kissed Los Alamos – a valley many might consider too cool to grow optimum merlot – smacks of Bordeaux, too, where merlot accounts for 60% of vines.

“People these days are growing merlot where it’s way too hot – merlot does not like it where’s it’s too hot,” insists Lucas, who grows 15 acres of merlot across three different Los Alamos Valley properties.  “Sure, the heat gets you a nice red wine, but you can’t tell it’s merlot.  And the world is full of ordinary red wine.”

The grapes for the 2014 Judge’s Reserve ripened slowly and fully.  They were handled separately from the rest of the merlot harvest and treated to two years in high-end French barrels.  The wine, made by Megan McGrath Gates and with plenty of aging potential for years to come, is plump, curvy and intense.  It’s inky dark, and the flavors are a mouth-filling amalgam of dark berries, vanilla and earth.  A real pleasure.  “I’m so happy it turned out unique,” says Lucas.  Only 191 cases were made.

The bigger picture takeaway here, of course, speaks to Santa Barbara’s still-budding potential for growing quality Bordeaux wines like merlot, cabernet sauvignon, cabernet franc and malbec.  (Lucas has a new carmenere program in the works, too).  The secret is in the setting – perfect pockets where these grapes will get whatever it is they need to blossom into exceptional fruit.  Most of the attention locally is driven by heat, in areas like Happy Canyon, Los Olivos and Santa Ynez – warmth allows these grapes to develop, ripen and mature all the way.  In that sense, Lucas’ discovery in a cooler area like Los Alamos bucks consensus.

But site, and whatever magic it imparts, often trumps consensus.  The proof is in the bottle.

And now that you’re in the merlot mood, also try Brander’s 2015 Los Olivos District Merlot (I’ve seen some wine shops selling it for less than $20), as well as merlots by Gainey, Sunstone and Baehner-Fournier.