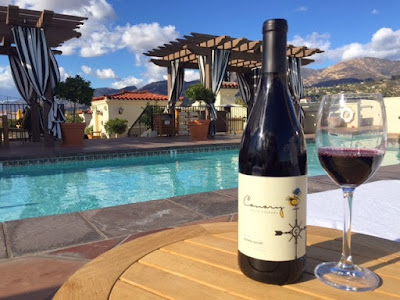 Canary Santa Barbara, the 4-Star boutique Kimpton hotel in the heart of downtown Santa Barbara, just unveiled its own premium wine.  The 2013 Estate Syrah is made by winemakers Brooke and (son) Chase Carhartt of Carhartt Vineyard.  This marks the Santa Ynez Valley-based winery's very first private label for a hotel, and it makes the Canary the very first Kimpton property in California to have its own custom-made wine.

"This is an exciting collaboration for us, as the Canary and Carhartt share the same principles of quality, customer service and delivering a world-class product," says Joe Ramos, who runs Carhartt's Wine Club.  "The opportunity to work hand in hand with one of Santa Barbara's premier hotels has been extremely rewarding." 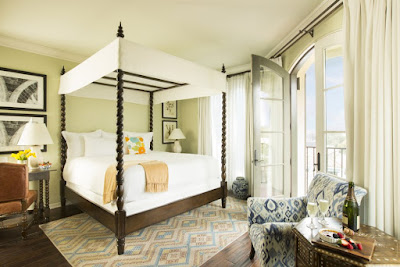 The syrah will be featured in the Canary's wine-themed packages.  For example, guests who book the "Syrah and Suites" package for travel between February and May, 2016, will find a complimentary bottle of the '13 Syrah in their Mediterranean-styled suite.  The offer, which is bookable starting in December, also includes wine tasting for two at the Carhartt tasting room in Los Olivos, an easy 45-minute drive away.

"We see this really as an invitation for guests to come out to wine country and experience a true, local, family-run winery,” adds Ramos, who’s also been working with Chase Carhartt to educate Canary’s restaurant and concierge teams on the merits of Santa Barbara’s wine country.


"Wine is an important part of Santa Barbara's culture," says Canary GM Ryan Parker.  "Many of our guests travel specifically here for the wineries, so we are always looking for authentic ways to capture the local flavors and create that quintessential Santa Barbara experience." 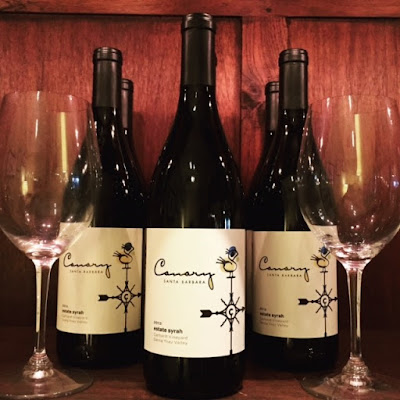 Wine curious guests at the 97-room Canary Santa Barbara also get an invite to the nightly 5pm complimentary wine hour in the lobby.  The wine list at the popular onsite Finch & Fork Restaurant also features various local labels, including the Carhartt sauvignon blanc and sangiovese.

Carhartt Vineyard is family-owned and operated, and it sells all its wine direct to consumer through its wine club and tasting room.  It produces 22 different wines, several of which are grown on 14 acres of proprietary land, including Rancho Santa Ynez.  The Canary 2013 Syrah comes from the Carhartt estate’s original vineyards, planted 18 years ago, and is the same wine that retails under the Carhartt label for $34.

For more on Carhartt Vineyard, visit their 99-square-foot tasting room – widely known as the world’s smallest – at 2990-A Grand Avenue in Los Olivos, or check out the Carhartt website.  For more information on Canary Santa Barbara, located at 31 W. Carrillo Street in Santa Barbara, go to the Canary website.

Thanks for the Wine: What Santa Barbara Winemakers Will Be Sipping this Thanksgiving

If you’re like me, there are at least a couple of rare or expensive or unique wine bottles that have been awaiting a special occasion all year long.  Invitations and invitees have come and gone.  But it’s not until the holidays that we find a supper special enough to open these reserved sippers and share them with those we love.

Many of our local winemakers are no different, it turns out, and I asked a few about the special bottles they’ll be what they’ll be popping on this Thanksgiving.

Dave Potter, Municipal Winemakers and Potek
“Since we are usually sharing the table with family and friends, it’s a nice time to share special wines,” admits Potter.  Next Thursday, he’s opening up bottles he picked up on a trip to Burgundy and Bordeaux in 2011, where he got engaged.  “Firstly, with five years in bottle after release, those wines are really hitting their stride now,” he tells me.  “Also, all this insanity in Paris has really got me thinking about how wonderful France is and how special our trip was, and wine is a great way to transport us back there.”  The Potters are especially thankful for their daughter, who was born just six weeks ago.

Drake Whitcraft, Whitcraft Winery
“Well, I actually always just pick any of my dad’s wines,” says winemaker Whitcraft, whose father, legendary winemaker Chris Whitcraft, passed away last year.  ”They are all very special and very limited now.  And he always said wine is made to drink, preferably before it goes over the edge.  So this year, seeing as there is a turducken involved, I will reach for a high acid, early vintage Bien Nacido Vineyards or Hirsch Vineyards pinot. And for whites?  No offense pops, but I'm going with my current stuff.”  The younger Whitcraft’s own 2014 Presqu’ile Vineyards Chardonnay, vibrant and sophisticated, would be a perfect pick.

Aaron Walker, Pali Wine Co.
“I will most likely open up a 2003 Syrah from Sine Qua Non called "Papa,” Walker (himself a proud papa of two) tells me.  He’s been hanging on to this bottle for 10 years, since his server days in San Diego, where his love for syrahs was sparked.  “This is a wine that I have wanted to open for some time now, and this Thanksgiving will be the perfect opportunity, with my family and loved ones nearby.”  For a versatile Thanksgiving white, try Walker’s 2013 Pali Wine Co. Huber Vineyard Chardonnay, with fruit-driven flavors and lively minerality that will match the entire feast.

Jonathan Nagy, Nielson by Byron
“We will probably open a Delamotte Rosé as inspiration for the chefs,” says Nagy, who's also husband of Riverbench winemaker Clarissa Nagy.  “Clarissa loves rosé Champagne, and that makes it special to me.”  Nagy’s own specialty is pinot noir, and, for Thanksgiving, his 2013 Byron “Nielson” Santa Maria Valley pinot would be a versatile and very food-friendly wine.

Benjamin Silver, Silver Wines
"My Thanksgiving wine choice is a spontaneous decision and involves multiple bottles," says Silver.  "I'll look in my wine cellar for red fruit-driven wines with some structure: masculine-styled pinot noirs, Barolo or Barbaresco, medium-bodied Cabernet Franc, or medium-bodied sangiovese-based wines.”  Consider Silver’s own 2010 Nebbiolo, with a lively mouth feel and with enough acid and structure to hold up lots of Thanksgiving flavors.

Michael Larner, Larner Vineyards & Winery
Larner is going back to 1997 both because of the past and the future.  “Among a few European selections, we’ll be pouring a ‘97 Chateau La Nerthe Chateauneuf Du Pape,” he says.  “We purchased our ranch in the Santa Ynez Valley to start our estate vineyard from scratch in that vintage.  My family traveled many times to France and specifically the Rhone Valley seeking inspiration, and I can remember the excitement my parents felt meeting the General Manager for La Nerthe.  Their philosophy is the task I charged myself with and still hold today -- focus on the vineyard, and the winemaking is easy.”  The 1997 vintage also marked California’s last visit by El Nino, and with the stormy period’s apparent return, Larner feels that “there is hope of relief from the drought we have experienced for the last three years.”  The Larners will also be sipping their own estate wines – all fantastic Thanksgiving matches – like robust yet refined 2011 “Elemental” blend of syrah, grenache and mourvedre.

Nikki Nelson, Liquid Farm
Nelson is reaching back to her birth year and opening up a 1982 Chateau Palmer.  She and husband Jeff won it at a Santa Ynez Valley charity auction last year.  “The projected decline of it is coming very soon, so no better time to open her up and see what she’s all about, after 33 years!” she tells me.  “Hopefully awesome, fingers crossed.”  Liquid Farm’s 2013 Golden Slope Chardonnay, with its citrusy minerality, would be a perfect sipper while this fancy Bordeaux breathes. 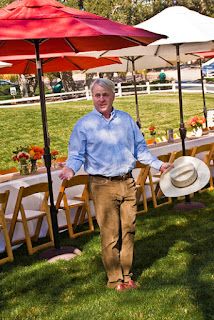 Geoff Rusack, Rusack Vineyards & Winery
For Rusack, the focus is on the wine for the end of the feast: a 1955 Dow’s Port.  “I acquired it even before I met my wife Alison, and that was well over 30 years ago!” he says.    The man behind Rusack Vineyards fell in love with Port in college, during a skiing trip to Idaho that included a serendipitous pairing of port, apples and Stilton cheese.   “I learned, for the first time, what true synergy in food and drink was,” he recalls.  “Back then, I was working at a fine wine and liquor store in Santa Monica – Pearson’s Brentwood.  I noticed they had a couple of bottles of 1955 Dow’s, and I was able to convince the owner into selling them to me.  I’m not sure I was even 21!”

No matter what you’ll be popping open next week, just remember to count your blessings.  And don’t hesitate to splurge.  Happy Thanksgiving!

One of Santa Barbara County’s most esteemed vineyards is on the market.

Zaca Mesa Winery & Vineyards is being sold for $32 million.  The historic property along Foxen Canyon Road is comprised of mostly open, undeveloped land.  The site includes about 150 acres of estate grapevines, though it’s expandable to 250 acres.  There’s also a 24,000-square-foot barn-style winery that currently produces 40,000 cases a year, with a capacity of 100,000 cases.

Zaca Mesa was one of Santa Barbara’s earliest vineyards.  It was established in 1972 by a group of oil and land moguls, including real estate magnate John Cushman.  In 1988, Mr. John Cushman, along with his twin brother, Lou Cushman, gained sole ownership of the land, and Zaca Mesa has been family-owned ever since.

“My commercial real estate interests dictate that I can no longer devote the time and energy to the proper oversight of Zaca Mesa,” says Mr. John Cushman, who recently divested his interest in Cushman & Wakefield, the real estate firm founded by his grandfather.  However, his continued global role within the company, which recently merged with real estate services firm DTZ, and his continued active role as board member, director or trustee of companies like Callaway Golf, the Boy Scouts of America and the National Park Foundation, has him traveling more than 8000 miles a week.  “After 40-plus years as the steward of this property and the Zaca Mesa brand, I am ready to pass it on to a new steward who can take it to new levels of success and preserve its unspoiled beauty."
Aside from some 750 acres of land, the new owner of Zaca Mesa will also inherit a legacy that’s well known in the wine industry.  In 1978, under the direction of its first winemaker, Ken Brown, the estate was the first to plant syrah grapes in Santa Barbara County.  In 1990, President Ronald Reagan poured a Zaca Mesa pinot noir at his 80th birthday party.  Zaca’s 1993 Syrah, made by winemaker Daniel Gehrs, took the #6 spot in Wine Spectator Magazine’s Top 100, the first time a Central Coast wine ever appeared on that coveted list; President Bill Clinton would pour that wine for French President Jacques Chirac during a White House visit in 1996.

"An interesting aside about that," Mr. Gehrs' wife, Robin, wrote me via Facebook as soon as this story broke.  "The award-winning syrah was sold out at the time of the State Dinner so John Cushman provided it from his personal cellar!"

The list of winemakers who’ve trained at Zaca Mesa over the years reads like a who’s-who of some of Santa Barbara County’s best, which is why many insiders often refer to the winery as Zaca U.  Jim Clendenen, Bob Lindquist, Adam Tolmach, Chuck Carlson, Benjamin Silver and Clay Brock have all held winemaker titles here.  Zaca’s current team includes head winemaker Eric Mohseni and assistant winemaker Kristin Bryden.

Zaca Mesa is home to seven Rhone grape varieties, including 91 acres of syrah and smaller plantings of grenache, mourvedre, cinsault, viognier, roussanne and grenache blanc.  There’s no home onsite, but the three parcels that make up the ranch are all zoned for residential development.  The property is listed with Katie Somple of WineryX Real Estate.