In an industry wrought with rules – only whites pair with fish! – bending the rules of wine consumption is becoming increasingly hip. I was at a dinner recently where someone dropped a couple of ice cubes into their pinot grigio; I looked around -- no one batted an eye.

And pinot noir is my preferred wine with pretty much any fish, to be honest, even super light and flaky ones.

(Collective gasp from the wine snob section.)
One rule I’ve been bending more and more lately is chilling red wines down. We all know the rule: serve white wines cold and red wines at room temp. But the temp in the room goes up in the height of summer, making many reds seem flabby. What’s more, a red wine that’s just chilled and allowed to slowly rise during the bottle consumption process delivers several wonderful things 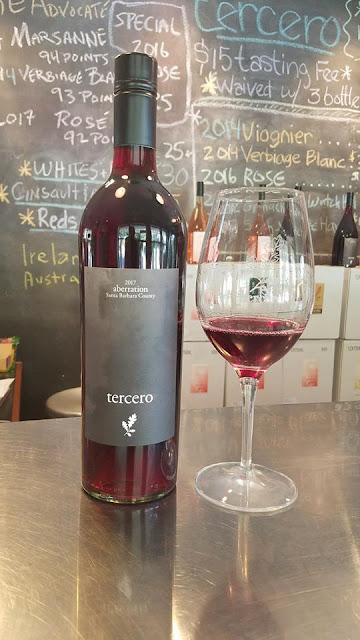 My wife began noticing this more and more at local Italian restaurants – that the bottle of red we ordered came to the table a lot colder to the touch than she was used to. At first, an eyebrow raiser. But then she began to tout the idea, because she found that the wine not only tasted fresher, was easier to sip and played nicely with our steamy pasta fare, but it evolved, too. New smells and tastes emerged as we mutually gulped our way through the bottle, and that made drinking the wine more fun.
My own eyes had already been opened, actually, by my friend, winemaker Larry Schaffer, whose label, Tercero, is a treasure trove of Rhone-inspired creations. At his Los Olivos tasting room, several of his reds are served with a bit of a chill. “Any wine will show different at different temperatures,” he tells me. And with his popular blend, Aberration, the sipping experience goes up when the serving temp goes down, and in a way that he prefers.
“My 2017 Aberration, which is a blend of grenache, cinsault and carignane, and which are all picked rather early, is quite fruity at room temperature,” he says. “When chilled, an earthiness from the 100% stem inclusion shows more prominently, as well as a ‘crunchiness’ on the finish that helps balance the fruit.” Suddenly, a colder version of the Aberration makes it more interesting.
Schaffer continues, “The challenge is that when you chill most reds, you numb them – the aromatics are subdued and the texture becomes muted. So it’s not an absolute situation.” 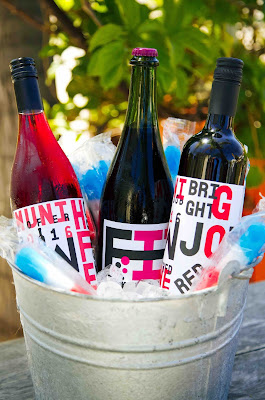 My friend, winemaker David Potter, just sent out an email to his Municipal Winemaker newsletter audience titled, “Ice Cold Red Wine.” It promoted three wines: a sparkling syrah, a grenache made from 80-year-old vines growing in Rancho Cucamonga and his popular, Rhone-centric Big Red blend, all sold as a three-pack, and shipped to your door, for $85. Potter tells the reader, “Chilling down [lighter-bodied reds] will show off the acidity, tannin, and overall refreshing-ness of the wine. Don't worry about the cold turning down too much of the volume on all that interesting wine, though.  If it's hot out, the wine warms up in the glass with a little time, and boom, flavor!  We pretty much always prefer to err on the side of freshness over loud flavor anyhow.
“Trust us, ice cold red wine is what you've been missing out on at those summer bbqs.”
So, slowly but surely, the word’s spreading. I know, nothing new here -- generations before us have been chilling their wine, regardless of color, to enjoy it better. Simple as that. But as more and more talented winemakers begin to promote their wines as better savored when a little colder, more and more of us consumers learn one more way to better savor what we sip.
Best ways to give your red a quick nip? Pop it in the fridge for 15 to 30 minutes, or stick it in an ice bath for about 10.

When in Chile: How Wine Consumption Differs South of the Equator

It’s been two years since I saw my younger brother, Luis. So with his quick California visit this week, we’ve done plenty of reminiscing, catching up and chatting life, all while going through several bottles of wine. Discussions about how wine is enjoyed in our native Chile, and how it differs from wine consumption in the U.S., have been especially interesting to me.

The winegrowing scene in Chile is actually not all that different from how it’s done in Santa Barbara: coincidentally, the heart of viticulture in both regions is equidistant from the equator – about 34.5 degrees – so things like topography and climate are similar. But a major portion of the wines produced in Chile are earmarked solely for domestic consumption, and wine drinking habits revolve around distinct nuances. Here are a few observations I made this week, between sips.

﻿﻿
Variety﻿
“Carmenère is generally considered the national grape of Chile,” Luis tells me. “And carignan has become really popular, too.” You’d be hard-pressed to find either of these grape varieties bottled on their own in California. Carmenère, for example, lives in the shadows of its more famous Bordeaux sisters, like cabernet sauvignon and merlot, and is used primarily in blends. It makes a dense wine: the 2011 Concha y Toro Marques de Casa Concha Carmenère we shared this week was dark, deep and earthy. But in a country where red meat cuisine reigns supreme, carmenère, which thrives in many Chilean vineyards, fits. Carignan is a Mediterranean red grape that exhibits red fruit character and that’s made a few inroads locally; it grows at Camp 4 Vineyard in Santa Ynez and is used in blends by winemakers like Tercero’s Larry Schaffer.

Bang for Your Buck
“You can get a really good bottle of wine for about 4000 or 5000 pesos,” my brother says. That’s less than $8, making dependably good wine particularly affordable in Chile. Here at home, I’d put the comparable price point sweet spot at $15 to $20. Twice as much, and the quality you’re getting is often iffy, while $30-plus should always land you a great bottle. The affordability of good wine in Chile makes it pervasive. “Everyone buys wine, everyone has it at home waiting to pour for guests,” Luis says, “even people who know nothing about wine or who are happy to drink everyday wine out of just a water glass.” In the U.S., he continues, “the everyday wine experience is usually limited to actual wine aficionados,” who are simply more willing to pay more for good wine.

The Experience
When I last visited Luis in Chile several years ago, we visited Concha y Toro. The world-famous winery is set on a sprawling vineyard estate about an hour outside of Chile, and the visitor experience – from the one-on-one tour with the winemaker to a tour of the estate’s manor house to the sit-down wine lunch – was fantastic. Visiting wineries is common in Chile, although “it’s best to make an appointment and prepare for a full-on wine country experience,” says Luis. He contrasts the hospitality aspect of the Chilean wine experience with the tasting room-driven model in Santa Barbara. In truth, wine tasting in Chile is more immersive -- much more akin to what wine travelers find in Paso Robles and Temecula, where looser restrictions (compared to Santa Barbara) actually allow wineries to build restaurants and even hotels onsite to create an experience.  Many of us who are involved in the Santa Barbara wine industry have long been aware of this – that our county’s constraints may well have put our local wine industry at a competitive disadvantage. It’s interesting that someone visiting from the other side of the world notices this, too.

If you want to experience the wine harvest in Chile, just keep the seasons in mind: they’re flipped on that side of the equator, which means grapes come off the vine February through April.
Want more wine. food & travel news? Follow me on Twitter & Instagram!
###
Posted by Gabe at 3:47 PM No comments: