When Leonardo Curti launches his new restaurant later this month, he’ll be opening his doors to plenty of expectation.  And he’s well aware of that. (UPDATE: Leonardo's opened for business on January 18th!)

“Your customers get used to the flavors you create,” he says.

For almost 20 years, inside a buzzy dining spot in dusty downtown Santa Ynez called Trattoria Grappolo, Chef Leonardo Curti made a name for himself.  The restaurant he co-founded in 1997 was known as one of the best in the county and, for a long time, by far the best Italian place to eat in the Santa Ynez Valley.  Over the years, Mr. Curti padded his rising star status with occasional TV stints with the likes of Giada De Laurentiis, and he authored three popular cookbooks.

But earlier this year, “it was just time,” Mr. Curti says, and he sold his interest in Grappolo to set his sights on something new.  He cast out a wide net: “I called every restaurant in town to see if anyone would sell, or if they needed someone to work,” recalls Mr. Curti, who spent several months in the kitchen of Mad & Vin at Solvang’s new Landsby Hotel.   But it was finding just the right location inside the Nielsen Shopping Center in Solvang – “It’s the heart of the Valley, in the middle of everything,” he says – that pushed Mr. Curti to launch his own restaurant anew. 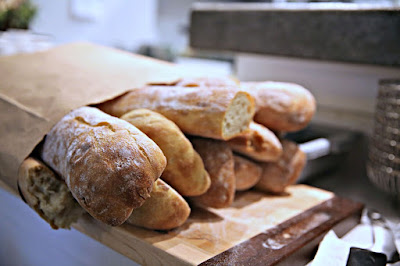 “And now we’re going to have the old Leonardo back,” he says, enthusiastically.  “I’ll be able to spread my wings and do my creations as a chef once again.”

Leonardo’s Ristorante will begin welcoming customers on January 18th, and the fact opening day happens to fall on Mr. Curti’s birthday is fitting.  This is, after all, a very personal venture, inspired by this Calabria native’s own traditional roots (his culinary training began alongside his grandfather at age six) and by his relentless need for “a taste of home” (at his Buellton residence, he replaced the front lawn with olive and cypress trees and a sangiovese vineyard).

The main attraction will likely be the exhibition kitchen that’s been built right in the middle of the 50-seat restaurant.  The voyeuristic perks for diners abound, to be sure, but this is a setup that fits Chef Curti’s outgoing, engaging personality well.  “You can almost hear the customer ordering the food, you can see who’s coming in the door, you see people reacting to your food” says the chef, who envisions a system where orders are shouted out to the kitchen, or announced, rather than written down or entered into a computer.

The centerpiece kitchen will also feature a pizza oven, which arrived from Italy just last week.  The commercial grade oven is traditionally Neapolitan, with a semicircle brick dome shape and dual gas and wood-burning options to provide both functionality and experience.  “You can see the guy flipping the pizza in the air right in front of you,” the chef says. 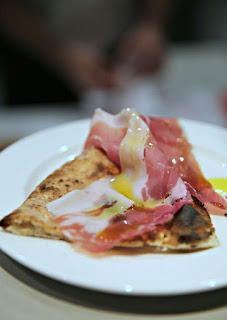 The Leonardo’s menu will also include traditional renditions of fish, steak and veal that are driven by ingredients that are locally and seasonally available.  Here, Chef Curti will depend on relationahips with purveyors that he’s been cultivating for decades – Jordanno’s, The Berry Man, All Itallia Imports, Universal Seafood – and relationships he continues to keep person-to-person.  “I don’t need a computer form to order my food,” he insists, in his genuine Italian accent.  “I can find info online myself, but I like the relationship, when the salesman comes over and we just talk.  Come one, we’re ordering food.  I’d like to talk to a person!” 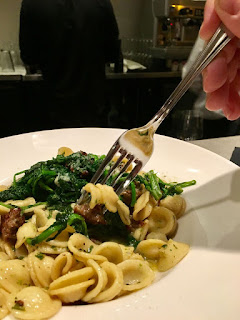 That conversational approach has always defined Chef Curti’s rapport with his clientele, too.  “A customer is like a friend coming to your house – you have to make them feel welcome, not just like someone who pays a bill,” he says.  In fact, Mr. Curti is training his staff to get to know repeat clients: where they like to sit, what they like to eat.  “It takes a few tries, it takes time,” he admits, “but as soon as they come in, customers have to feel good.”

Chef’s chattiness extends to the kitchen, too, where Mr. Curti is not too shy to admit, colorfully, that he talks to his food.  “You speak love to the pizza, it makes it perfect,” he says.  “Every single ingredient adds its part.  It’s not just pepperoni or just tomatoes.  It’s not just a round disc with ingredients.  Pasta sauce on its own is basic, but you put it on the plate and it becomes part of something.  So you have to talk to it, like it’s alive.  You have to create a relationship with the food you’re making.”

Chef Curti has shown his hand to reveal some of his upcoming dishes.  Like the Pizza Cent’Anni, with mozzarella, ricotta and parmigiana cheeses, arugula, spinach, prosciutto “and an egg yolk on top.”  A bagel-inspired pizza will feature mozzarella, craime fraiche, salmon, caviar and green chives.  The traditional Spaghetti Cacio e Pepe will come with fresh-ground pepper and plenty of pecorino Romano cheese.  And the dessert bamboloni – stretched out pizza dough that’s shaped and deep fried – will be sprinkled with sugar and served with vanilla and chocolate sauces for dipping. 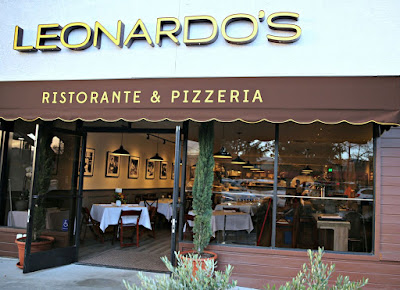 The chef is also giving himself plenty of creative leeway.  He says the “Leonardo’s” name also doubles as homage to Leonardo da Vinci, a genius whose many talents included cooking and developing forward-looking rules of restaurant etiquette.  “So why not be traditional but also creative? Why serve lasagna always in layers, why not as a roll?” muses the chef.  Mr. Curti will also launch a menu he dubs Aficionado, inspired by five friends who’ve been Monday night regulars for years and who always order whatever Mr. Curti wants to whip up on the spot.  “It’ll be a menu on the wall, with unique dishes,” he says, that expose clients to new flavors and offer the chef creative license.

The wine list at Leonardo’s is still a work in progress but will be heavily focused on Santa Barbara, with a few imported Italian labels.  It’s being put together by Mr. Curti himself, who insists, “It has to be representative of this region we’re in.”