The Rhone Rangers rode into Santa Barbara this week, and they came to impress. 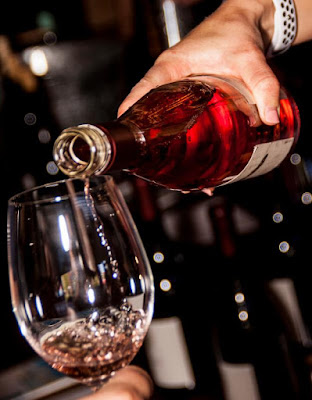 The nonprofit group is on a mission to promote the diverse swath of grapes that are native to France’s Rhone region. Indeed, more than 20 grape varieties fall under its promotional umbrella, including reds like syrah and grenache and whites like viognier and roussanne. In the marketplace, these varieties are often in the shadows of industry darlings like pinot noir and cabernet. For those who’ve discovered these wines, however, and for the men and women who make them, they deliver the kind of complexity, food-friendliness and value that are downright remarkable.
The Rhone Rangers’ Santa Barbara chapter includes some of our favorite local labels, like Fess Parker, Margerum and Qupe. These producers have figured out that Santa Barbara County offers various special spots where Rhone grapes flourish. And the wines they produce consistently stand out as some of the region’s finest.
The latest tasting by this Santa Barbara team took place this past Tuesday – a trade and consumer event at the Santa Barbara Wine Collective in the Funk Zone that was intimate in its vibe and impressive in its scope. These three wines were real standouts for me.
tercero 2016 Cinsault
Winemaker Larry Schaffer, easily the lead cheerleader of the Santa Barbara Rhone Rangers cavalry, launched his tercero label in 2006, though he’ll tell you it’s really become a personal tour de force in the last five years. Since then, the man who likes to serve whites at near room temperature (“Otherwise, the aromatics go dead,” he says), and who foot-stomps all his reds, has been blending personal knack with inquisitive experimentation to create a consistently fascinating portfolio of wines. The ’16 Cinsault delivers: subtle jamminess, hints of tea leaf, brightness, freshness. And its low alcohol – around 11% -- may make this the ultimate summer red. “My MTV unplugged wine,” is how Schaffer describes it. “Or, the kid in the corner with the ukulele, unplugged.” Very much present, but in a refreshingly unassuming way. The tercero Verbiage Blanc (a blend of roussanne, viognier and grenache blanc) was awesome. And the just-bottled 2017 Mourvedre Rosé, with aromatics that pop, reminded me that these soft-hued wines can, indeed, be textured and complex.

Kita 2014 Spe’y
“This is just a really good food wine,” Kita winery rep Lisa Morgan told me as she poured this wonderful blend of grenache, syrah and carignane. And she was right: this inky, medium-bodied wine delivers ripe berries and earthiness on the nose and mix of spice and floral notes on the palate, and the finish is surprisingly fresh. Winemaker Tara Gomez, a member of the Santa Ynez Band of Chumash Indians, sources most all her fruit from the tribe’s Camp 4 Vineyard, where soil and weather combine for optimum growing conditions for Rhone grapes. Spe’y is the Samala word for “flower.” Kita production remains at just about 1500 cases a year, and its brand new Lompoc tasting room should start welcoming tasters later this year.

Zaca Mesa 2012 Mesa Reserve Syrah
This trailblazing winery is riding high this year, as Zaca Mesa celebrates 45 years. In a young wine region like Santa Barbara, that’s a milestone. The 2012 Mesa Reserve may have been the best syrah of the day: beautifully structured, dense yet lithe, and bursting with flavors of dark berries, chocolate and sweet earth. What I wrote in my notes: “Wow!” Winemaker Kristin Bryden, who’s been with Zaca for seven years, described it as a snapshot of the vineyard’s younger syrah blocks and “a blend of our very best barrels.” In the mood for a super syrah? This is it. The Estralla Syrah, which includes fruit from Zaca’s 1978 Black Bear Block (the first syrah vines ever planted in Santa Barbara County) was also a standout. Zaca’s whites – viognier and roussanne – and its Z Gris rosé are sure to be summertime sellouts.

Visit the Santa Barbara Chapter of the Rhone Rangers on Facebook. And, for more information on the Rhone Rangers and its member wineries throughout the country, check out rhonerangers.org.
Want more wine, food and travel news? Follow me on Twitter & Instagram!
###

Forty-five years is a major milestone for any California winery, especially for one in a young viticultural area like Santa Barbara. Wine growing in this part of California dates back only to the late 1960s; local wines produced to compete on an international level didn’t really hit the marketplace until the mid- to late-1970s. So yes, Zaca Mesa’s 45th anniversary is a big deal.

Zaca Mesa became one of Santa Barbara County’s very first estate vineyards when a group of oil and land moguls, including John Cushman, established it in 1973. Real estate savviness, it turns out, paid off, since Zaca’s beautiful physical location – 25 miles from the Pacific, along the San Rafael Mountains, at an elevation of 1500 feet, blessed with complex soils and a temperate climate – is what’s driven its ability to generate distinctive wines.  Mr. Cushman and his twin brother, Lou Cashman, gained sole ownership of Zaca Mesa in 1988, and the winery’s been family-owned ever since. (Zaca Mesa was put up for sale in 2015, and it remains on the market.)
Zaca Mesa’s prominence as a Rhone producer stretches back to 1978 when, under the direction of then-winemaker Ken Brown, it became the first vineyard in Santa Barbara to plant syrah. Ever since, the red grape has become its primary calling card: its 1993 Syrah, made by Daniel Gehrs, took the #6 spot in Wine Spectator Magazine’s Top 100, the first time a Central Coast wine ever appeared on that coveted list; the 2006 syrah, made by Clay Brock, also hit the list, taking the #29 spot. Zaca syrahs have consistently gained 90+ industry scores ever since.
President Ronald Reagan poured Zaca Mesa wine at his 80th birthday party.  President Bill Clinton poured Zaca wine for French President Jacques Chirac during a White House visit in 1996. And, for what it’s worth, I proposed to my wife with Zaca Mesa’s 1999 Black Bear Block syrah; almost 15 years later, we’re still going strong, so that’s got to count for something!
Today, of the Zaca estate’s 750 acres, more than 90 are planted to syrah grapes, with smaller plantings dedicated to grenache, mourvedre, cinsault, viognier, roussanne and grenache blanc.
The caché of the fruit that Zaca produces has, over the decades, also extended to the people who’ve turned it into wine. The who’s-who list of winemakers who have Zaca Mesa on their resume -- Jim Clendenen, Bob Lindquist, Adam Tolmach, Chuck Carlson, Benjamin Silver – has led many insiders to refer to the trailblazing winery as Zaca University. Today, the world-class program is spearheaded by Director of Winemaking Eric Mohseni and winemaker Kristin Bryden.
﻿﻿﻿﻿
“Zaca Mesa has been a notable presence in the Santa Ynez Valley, known for its dedication to Rhône grapes and for quality viticulture, and few places have the honor of having a presence for 45 years,” says John Cushman, who’s planning a party.
Zaca Mesa’s 45th Anniversary Celebration will take place on Saturday, March 24th, and the public is invited. The event, scheduled from noon to 3pm, will feature myriad tasting stations throughout the barrel room and across the winery, as well as several library and pre-release wines. The general public pays $15; wine club members party for free. Food will be available for purchase from BBQ in the Stix and live entertainment will be provided by Sean Wiggins. Reservations are not required by RSVPs to kelsey@zacamesa.com are appreciated.
“On this landmark anniversary, we’re thrilled to celebrate this special place,” adds Mr. Cushman, “paying tribute to all the visitors and wine club members who have remained loyal to us over the years, and thankful to all who have worked so hard to nurture our vines and craft our wines.”
Zaca Mesa is part of the Foxen Wine Trail, located at 6905 Foxen Canyon Road in Los Olivos. The tasting room is open daily from 10am to 4pm, and there’s a variety of tasting and touring options available. Find out more at zacamesa.com.
Want more wine, food and travel news? Follow me on Instagram & Twitter!