This milestone, which was green-lighted by the Alcohol and Tobacco Tax and Trade Bureau, was more than a decade in the making.

The AVA distinction recognizes the district’s unique ability to grow wine grapes and highlights its unique climate and soil conditions, distinctive topography and historical relevance.  It’s a big win, especially, for Fred Brander, who founded his Brander Vineyard in Los Olivos in the mid 1970s.  He submitted the AVA petition in 2013, along with data from research he launched in 2005.

The feds agreed, among other things, that the geology in the region is special.  “We have broad alluvial sand that goes from north to south, with gentle slopes, not canyons or steep hills, and the soils are consistent throughout,” Mr. Brander said.

Mr. Brander will be hosting an AVA celebration for industry colleagues at his winery this afternoon.

The Los Olivos District covers close to 23,000 acres, about 1100 of which are planted to wine grapes.  It contains 13 bonded wineries – including legacy labels like Brander, Buttonwood and Gainey.  And there are 47 vineyards here that grow Bordeaux varieties, mainly -- merlot, cabernet sauvignon, sauvignon blanc -- as well as Rhone, Italian and Spanish grapes.

There are also four towns inside the new AVA, which is unique: Ballard, Solvang, Santa Ynez and Los Olivos.

The AVA designation creates a potential marketing tool for wineries that source fruit from within its borders: the right to use the phrase, “Los Olivos District,” directly on their wine labels.  Until now, they were limited to broader identifiers, like “Santa Ynez Valley” or “Santa Barbara County.”  No doubt, the caché and recognizability of the Santa Barbara name is tough to beat.  But many winemakers see this more defined ID as a way to both denote pedigree as well as better inform the consumer.

“We’ll definitely use it, because it unifies this area,” says vintner Bob Baehner, whose five-acre vineyard lies within the new AVA and whose elevation, at 1000 feet, marks the district’s highest point.  The Baehner Fournier 2015 Rosé of Merlot, made by winemaker Steve Clifton and set for release this spring, will carry the Los Olivos District AVA name.

At Buttonwood, winemaker Karen Steinwachs says no decision’s been made about label language.  But “it’s awesome to see the AVA finally happen,” she says, “because it certainly completes the jigsaw puzzle.”

For more information, check out www.losolivosdistrict.com. 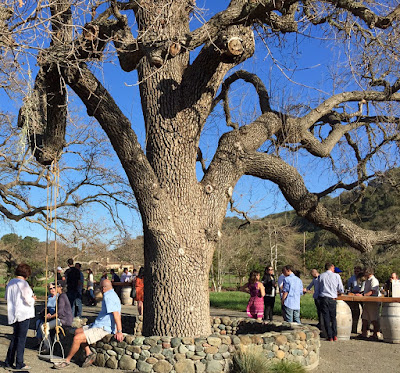 Grassini Vineyards, itself, played a starring role in the latest event produced by the International Wine Film Festival.  The sweeping property in Santa Barbara wine country’s Happy Canyon is gorgeous: Bordeaux grapevines and oak trees abound, and the picture-perfect lake is mesmerizing.  The intimate gathering took place on Saturday, on a 75-degree afternoon and under clear blue skies.

The gourmet breads from Bob’s Well Bread were knock-out good; it’s becoming increasingly harder to deny that Los Alamos' Bob Oswaks has a real knack for this baking thing.  The cheeses and charcuterie from Buellton’s Industrial Eats were awesome.

Over the bridge and down the lane, at the threshold of a beautiful barn decked out in theater-style seating, Alta Maria’s vivacious Stephanie Varner manned the popcorn machine.  This is where guests came to catch the show – a loop of Australian films all about wine– and to taste the variety of Aussie wines featured onscreen.

“An all-sensory experience,” says Wil Fernandez, who launched the first ever Wine Film Festival this month.  The spotlight is squarely on wine.  And with the added chance to catch dozens of films from all over the world that cast wine in the lead role, the fest’s events create a unique educational experience for the consumer.


To promote maximum (and responsible) enjoyment, the Festival teamed up with Stagecoach Co. Wine Tours to provide transportation for most guests.  They were picked up and dropped off in luxe motor coach -- complete with air conditioning and tinted windows -- from their hotels in Santa Barbara, Buellton, Solvang and Santa Ynez.

Up next: a VIP event on March 2nd at Presqu’ile Winery in the Santa Maria Valley, featuring feature films produced by wineries ($75), and an movie awards ceremony hosted by Master Sommelier Fred Dame on March 6th, as part of this year’s high-profile World of Pinot Noir event at Bacara Resort.

For tickets and information on the first International Wine Film Festival, go to winefilmfestival.com

The Heather Cottage – a recognizable landmark along Los Olivos’ Grand Avenue – is up for sale.

For more than 15 years, the cozy location has been home to Daniel Gehrs Wines, where thousands have come to taste the handiwork of Dan Gehrs – award-winning cabernet sauvignon, gewürztraminer and port, among others.  The cottage has also featured wine country gifts, many of them procured by Dan’s wife (and recently retired 2nd grade teacher at Santa Barbara’s Adams School), Robin.  The Gehrs moved their business into Heather Cottage in 2000 and bought the property in 2003.


Heather Cottage was built in 1904 and originally opened as a doctor’s office.  It served as a residence for much of the 1900s.  Set amidst a bevy of Los Olivos’ best wine tasting rooms and boutique shops, the Cottage is currently zoned for commercial use.

Located at 2939 Grand Avenue, Heather Cottage spans about 1000 square feet and sits on a 3500-square foot lot, with a cozy shaded patio in the back.  It’s listed with Steve Battaglia of Battaglia Commercial Real Estate, who’s taking sealed bids through Wednesday, February 24th.  A handful of bids have already come in.  Mr. Battaglia puts the property’s value in the $1.5-to-$1.75 million range.

What about the Gehrs’ very popular brand?  There’s a Santa Barbara wine legacy here, after all, with Mr. Gehrs neatly entrenched among this young viticultural area’s most influential players.  Among his greatest hits: a 1993 syrah he crafted while making wine at Zaca Mesa.  It nabbed the #6 spot in Wine Spectator’s coveted Top 100 Wines of the Year list, and it marked the first time a Santa Barbara wine ever made the list.
“We’re definitely keeping that going,” Mr. Gehrs tells me.  He’ll continue to make wines locally at Terravant in Buellton.  But the wholesale side of the business is coming to an end, with sales shifting online, through the wine club and at select local shops and restaurants.

And other changes are afoot that could well see Gehrs expand his wine focus beyond Santa Barbara County.

For more information on the sale of Heather Cottage, click here.

For more information on Daniel Gehrs Wines, check this out.
###
Posted by Gabe at 11:13 AM No comments:

For Wil Fernandez, watching a film while sipping on wine is pretty natural.

“It’s something people do and love,” he says.  “You can passively appreciate things going on in the glass while being visually and audibly involved with the film.”
He calls it, actually, a “full sensory experience,” and it’s the impetus behind his latest creative venture, the first ever Wine + Film Festival.  The three-week fest, which will feature several events throughout Santa Barbara County, will launch on February 14th, the day after the lights on the high-profile Santa Barbara International Film Festival dim.  It’ll end with an awards ceremony on March 5th, during the highly popular World of Pinot Noir (WOPN) tasting event at Bacara Resort & Spa.
Mr. Fernandez, 38, says more than 30 films have already been submitted.  A handful are longer-format or full-length features, including the new "SOMM: Into the Bottle" documentary, which stars Santa Barbara sommelier Brian McClintic and which has seen major success since its release through iTunes earlier this month.  "Barolo Boys," a film about the revolutionary rise of wine from Italy’s Barolo region, and "A Year in Champagne," which explores the making of the world’s most famous sparkling wines, will also be screened.
Most of the submissions to the Wine & Film Festival, though, are short, innovative dramatic works – some as short as three minutes – that range from music videos to vignettes shot on mobile phones.  The main character in all the films is the same: wine.  And the festival’s events will give audiences the chance to taste while they watch, often sipping on the very wines spotlighted on the screen.
“It’s about making that full-circle connection – learning about wine while experiencing it in a variety of different ways,” Mr. Fernandez adds.
The February 14th event is, naturally, inspired by Valentine’s Day.  Set on the beautiful Larner Vineyard estate in Ballard Canyon, “Wine Country Date Night: Dinner & a Movie” begins with a Champagne toast in the vineyard at sunset and moves into the barn for an intimate upscale dinner designed by Argentinian celeb chef Diego Felix.  Just 20 two-top tables will be served multiple dishes, including a six-course dessert, while the new 90-minute SOMM doc plays on screen.  Nearly sold out, tickets to this event are $125.
The festival continues on February 17th and goes online, as Mr. Fernandez hosts a live screening event on Twitter.  A variety of video shorts will roll during the one-hour digital chat as 25 wine writers from around the country tweet out commentary.  The public is encouraged to join in, starting at 5:30pm PT, using the hashtag, #WineFilm.  “What’s in your glass is up to you,” says Mr. Fernandez.
Cabernet sauvignon comes into focus on February 20th, when Grassini Vineyards hosts an “Afternoon Vineyard Screening & Tasting.”  Set in Santa Barbara’s Happy Canyon – a sunny spot on the eastern end of the Santa Ynez Valley where warm-weather wine grapes like cabernet flourish – this event will screen various wine films produced in Australia.  The audience will sip cabs produced in Australia (and featured on screen) and compare them to their Santa Barbara-made counterparts.  Tickets are $45.
A VIP event on March 2nd is primarily a media and trade event, with a guest list that includes a slew of high-profile industry personalities, from vintners to sommeliers to journalists.  Set at the spectacular new Presqu’ile Winery in the Santa Maria Valley, this evening soiree will feature films produced by wineries, including a music video parody by Sonoma’s Jordan Winery and a short by Sonoma’s Martinelli Winery that won Wine Spectator Magazine 2015 video contest.  Among the food purveyors are Bob’s Well Bread and Far West Tavern, with tickets at $75.
The curtain falls on the festival on March 5th during the wildly popular WOPN, or World of Pinot Noir, a gathering of celebrated pinot noir producers from around the world that’s an annual sell-out.  As wine fans attend seminars and tastings, all set at Bacara Resort & Spa, films will be screening on a loop inside the hotel’s high-tech and intimate theater, allowing guests to watch on their schedule.  A comprehensive awards ceremony will be hosted by famed Master Sommelier Fred Dame.
For tickets and information on the first International Wine Film Festival, go to winefilmfestival.com.
This is not Mr. Fernandez’ first foray into highlighting wine on film.  The former ad exec from L.A. who moved to Santa Barbara three years ago made a big splash with his “Vintage 2014,” a groundbreaking multimedia project that involved video, podcasts, webcasts and gourmet tastings and that captured Santa Barbara County’s 2014 wine grape harvest from bud break to bottling.  “The Wine + Film Festival is really a result of all the cooperation that I found within the local wine community,” he says, “and the relationships I formed with many local wineries.”
The Santa Barbara County Vintners Association, which represents the majority of local wineries, is not involved.
“There’s definitely an increase in demand for wine-related video,” Mr. Fernandez says, “from the internet to cable TV to Netflix.”  So plans are on to bring back the International Wine Film Festival next year.
###
Posted by Gabe at 6:53 PM 1 comment: