“There are plenty of photography books on how wine is made, and by whom, and what tasting rooms look like,” declares George Rose, who happens to be a real whiz behind the lens, himself.

“I set out with the idea of showcasing where the grapes are grown. This is about the land and the people – it’s about the place.”
Rose’s latest coffee table book is, in fact, a beautiful tribute to Santa Barbara County’s wine region, delivered in sweeping, moving images. The hardcover “Wine Country: Santa Barbara County” ($80, including California sales tax and shipping) is almost 200 pages long, weighs more than three pounds and takes full advantage of its 11-by-14-inch format. “I wanted to present the pictures as if people were walking through a gallery,” says the photographer. “When you turn the page, and that image doubles in size – it makes an impact.”
Rose’s style makes the various vineyards depicted in the book look downright spectacular, like a sun-drenched stretch of Stolpman Vineyards along Ballard Canyon, or the starry harvest sky above Dierberg-Star Lane Vineyards near Lompoc, or a blanket of fog hugging the vines at Grassini Vineyards in Happy Canyon. Portions of the book guide the reader through several wine growing hot spots, like the pinot noir haven that is Sta. Rita Hills, the much warmer Los Olivos District and the Foxen Canyon Trail.
But Rose’s book goes well beyond the wine, reaching for that sense of place he mentions, capturing the people who live in the towns that make this particular portion of California special. “There’s a very Western flavor to Santa Barbara County that makes it unique and different from Napa and Sonoma,” says Rose, who published a similar book on Sonoma County’s wine region in 2017.
Solvang is represented by the young ladies doling out aebleskivers during Danish Days, the dancers twirling down Mission Drive during the 4th of July parade and the legendary Rancheros Vistadores traversing the open range on horseback. Buellton, Lompoc and the Santa Maria Valley star, too. And even Santa Barbara gets a chapter, with big pictures of families at dinner, friends out on bikes and plenty of smiling sippers in the Funk Zone. “I’ve been fascinated watching the wine tasting idea in an urban setting really explode,” says Rose.
One of the book’s most poignant sections is its spotlight on the women and men who work the vineyards. Dozens of photos capture the oft-grueling physical task of harvesting grapevines – plucking and sorting thousands of berries by hand, and often in the cold, dark hours between midnight and dawn. “I feel strongly that California is rooted in agriculture,” says Rose. “There’d be no wine industry without these people --  they are critical to the success of California wine. And it’s very important that we keep hitting on that topic. With all the politics today, that message gets lost.” 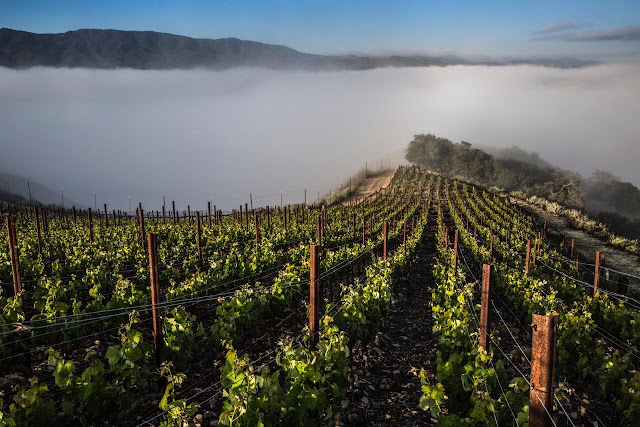 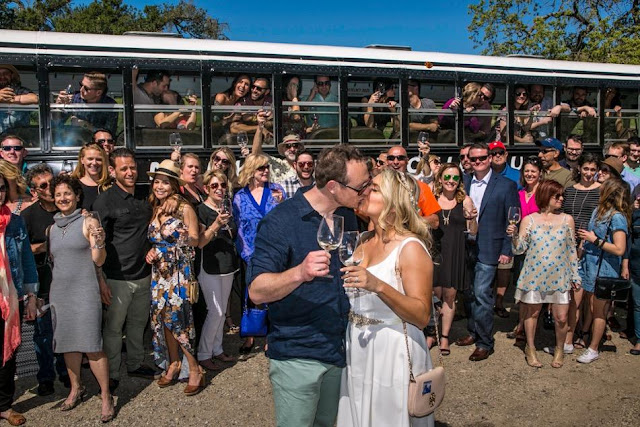 Rose, who moved from Healdsburg to Solvang six years ago, brings a lifetime of behind-the-camera experience to his new tome. He was in his 20s when he worked as a staff writer at the L.A. Times and, soon after, as an in-demand freelancer for Newsweek, Time and Rolling Stone. More than 13 years followed, as an official photog for the NFL. Serendipity stepped in when Rose was offered a job in wine industry marketing, a job he held for 25 years with companies like Fetzer and Kendall-Jackson. But Rose, who never stopped honing his shooting skills, decided to return to photography full-time in 2012, and he’s been gazing at vineyards through his lens ever since. “I realized quickly,” he says, “that my style worked well with vineyards’ own growing social media needs.”
“Wine Country: Santa Barbara County” is self-published by Rose, who secured funding from myriad tourism groups, like Visit Santa Barbara and Visit the Santa Ynez Valley, and local wineries, including Zaca Mesa, Foxen and Bien Nacido. The book is available at all sponsor tasting rooms, as well as Rose’s own website, georgerose.com.
An art exhibit featuring many of Rose’s recent landscape photography, titled “Santa Barbara County & Beyond,” will open at the Wildling Museum in Solvang on November 16th.
Cheers!
###
Posted by Gabe at 8:01 AM No comments:

Winemaker Brittany Rice doesn’t wallow in her struggles. She beat cancer once when she was three – acute lymphatic leukemia, which was eradicated after seven years of experimental trials. And she beat it twice when she was 39 – ovarian cancer, from which she’s free and clear today. The youngest of three who grew up in Palm Springs and the Santa Ynez Valley, she lost her mother, Linda, to cancer, too – breast cancer – in 2010.

“Lots of good, and many tragedies,” admits Rice, 41, who was recently divorced. “But I feel it's a responsibility of a survivor to tell the story so others having to go through it can learn." 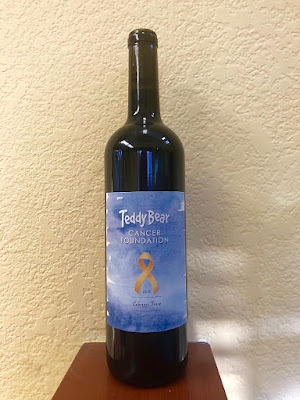 So Rice isn’t wallowing. No self-pity here. Rather, she’s melding her struggles and her talents to do good.
Rice just launched a new private wine label in honor of the Teddy Bear Cancer Foundation, which supports families living in Santa Barbara, Ventura and San Luis Obispo Counties who have a child battling cancer. The non-profit focuses not only on the child, but on the family as a whole – close to 200 families in 2019 alone – providing wide-ranging financial, educational and emotional support. That’s a big deal for Rice.
“Growing up having cancer, there wasn’t a lot of support for kids with cancer,” she says. “A lot of the guide and reassurance and balance weren’t there, so I think it’s amazing that Teddy Bear is there to support kids – and their entire families – that way.”
Rice is donating 25% of the sale of each Teddy Bear bottle to the Foundation. The 2017 Grenache Rosé ($42) was fermented for four days, “so it has a lovely red color, with raspberry and red currant notes, and a nice finish,” says the winemaker. The 2017 Viognier ($34) was fermented in stainless steel tanks, for a crisp mouth feel and flavors of apricot and Asian pear. And the 2015 Cabernet Franc ($48), “a soft, elegant wine that’s really bold and juicy, and with high tannins,” according to Rice, was aged in oak barrels that once stored dessert wine, giving the cab franc nuances of “caramelization, bourbon vanilla and a maple, though dry, finish.”
Rice was born into an entrepreneurial family who, in 1990, established one of Santa Barbara County’s great wine labels, Sunstone Winery; the family's 52-acre ranch in Santa Ynez features 28 acres of organically farmed wine grapes, including merlot, cabernet franc and syrah. Rice worked on the Sunstone team in the early 2000s and, in 2005, founded her own boutique label, Millésimé Cellars, to produce small lot, unfiltered Bordeaux blends. Millésimé produces about 800 cases of wine a year and sources organically grown grapes from throughout Santa Barbara County; the wines are showcased at a facility in Camarillo, where Rice has helped individuals and organizations create their own custom wine labels.
Rice’s other passion is food, which led her to earn a degree from the California Culinary Academy and, in 2010, found her own organic catering business, Rustik Chef. She’s also been a pastry chef at the Four Seasons Biltmore in Montecito and, until last week, at the Four Seasons Westlake Village. This week, with the 2019 harvest in full swing, Rice returned to Sunstone as director of winemaking, overseeing an annual production of about 14,000 cases.
“It’s a little daunting,” she admits, “but totally exciting, too.”
The Teddy Bear wines are all sourced from vineyards throughout the Santa Ynez Valley and showcase a golden ribbon on a sky blue watercolor label. They’re available through millesimecellars.com and by emailing the winemaker directly: Brittany@millesimecellars.com.
To learn more about the Teddy Bear Cancer Foundation, go to teddybearcancerfoundation.org. You can donate to them directly by texting TEDDY to 444999.
Cheers!
###