I’d say that’s a pretty fitting title for a man whose path to winemaking – and to making one of the very best cabernet sauvignons out of Santa Barbara today – is a blend of guts, talent and serendipity. 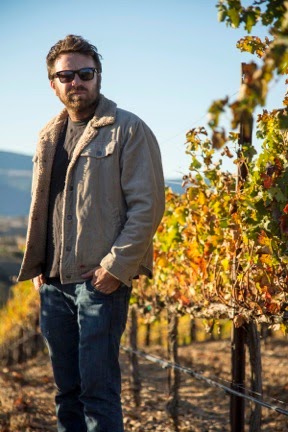 The just-married Santa Barbara native was once a professional snowboarder, an international career that stretched eight adrenaline-fueled years.  Thrills, yes, but also spills.  It was a combination of injuries and a personal need “to reevaluate,” as he puts it, that led him to change gears in the 1990s.

A move to L.A. would tap into a much earlier love: shooting pictures and making films.  “I’ve always loved looking at life through the lens,” he says, recalling a camera he received on his 16th birthday and calling it a defining moment.  He’d take on a slew of photography and film-based commercial projects before destiny brought him back home.

“Even during my snowboarding days, I was into tasting wine,” DaFoe tells me as we sit and sip at a Summerland café.  His rugged looks, and the bevy of bottles he’s brought to share well before noon, turn heads.  “My family didn’t drink wine, but I always felt a connection, and I knew that someday I’d be involved with it somehow.”

That move back home, and into the Santa Ynez Valley, sparked what would become his best movie project to date.  “I wanted to film someone teaching me how to make wine,” he remembers.  His camera started rolling in 2002, and this very personal undertaking would become so much more.

Tapping into talent throughout California – he’d end up interviewing more than 30 of the industry’s top winemakers on camera – DaFoe ended up capturing on film the ultimate crash course on, not just how wine is made, but what makes winemakers tick.  “I’d ask them not just how, but why. ‘Why do you make wine?’  And when you’re meeting all these different winemakers and walking through the vineyards and through the barrels with them – that was like a hundred vintages worth of winemaking insight all in one. 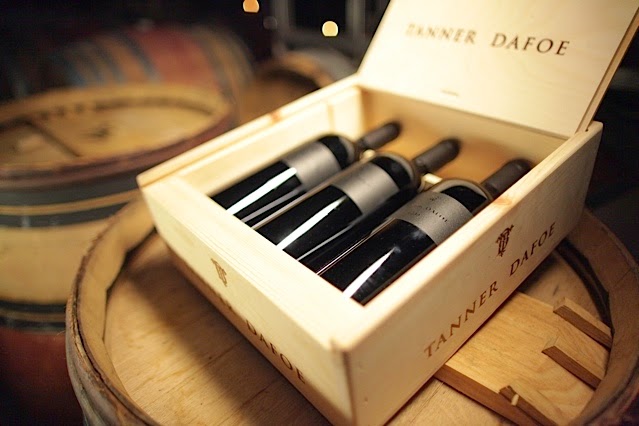 DaFoe’s film, From Ground to Glass, premiered at the Santa Barbara International Film Festival in 2006, to high acclaim.  And the project gave him something else: his very first bottle of wine, a Santa Ynez Valley syrah.  “It’s tasting “spectacular” today,” the winemaker admits.

That wine, though, was really just a stepping stone.  It planted a seed.  A few years later, DaFoe would meet Jeff Tanner, an L.A.-based commercials producer, with whom he’d embark on his latest tour de force: the superb Tanner DaFoe cabernet sauvignon.

In many ways, this wine smacks of Napa.  The packaging – an all-black label on a stark black bottle -- is sophisticated in its look and intriguing in its simplicity.  But the real wonder is the wine inside, a remarkably luscious, rich, elegant wine where flavors and tannins converge in harmony and where balance reigns supreme.  Qualities that have made many Bordeaux-style wines from Northern California famous.  But this one hails from Santa Barbara.

“We didn’t set out to change what people think of Santa Ynez,” says DaFoe, 44, who makes the wine by hand, with a focus on natural yeasts, and barrel-ages each vintage for at least two years.  “But this area allows for so much variation, hill to hill and valley to valley, in what you can plant." 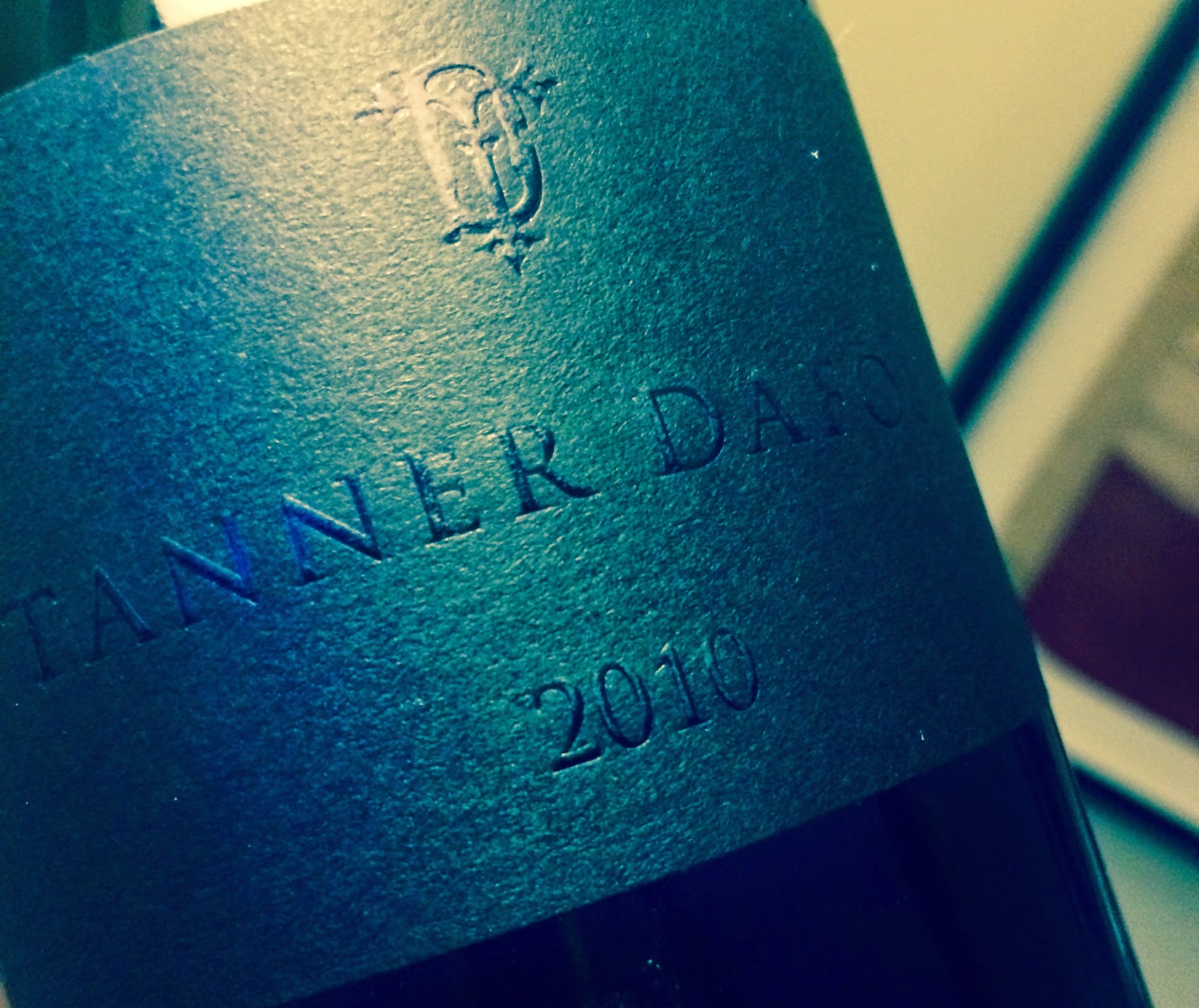 Santa Barbara County has long grappled with the criticism that Bordeaux wines fall short here, that requisite heat does not exist and that classic flavors don’t develop.  These days, of course, that notion is being challenged, thanks to several focused projects from Solvang to Happy Canyon.  And the Tanner DaFoe cab, made from a secret vineyard on the eastern end of the Santa Ynez Valley, may well be their champion.

“The problem is not ripening – there’s enough sun and heat here,” DaFoe insists.  “The problem is balance – ensuring full fruit flavors as well as enough acid in grapes." 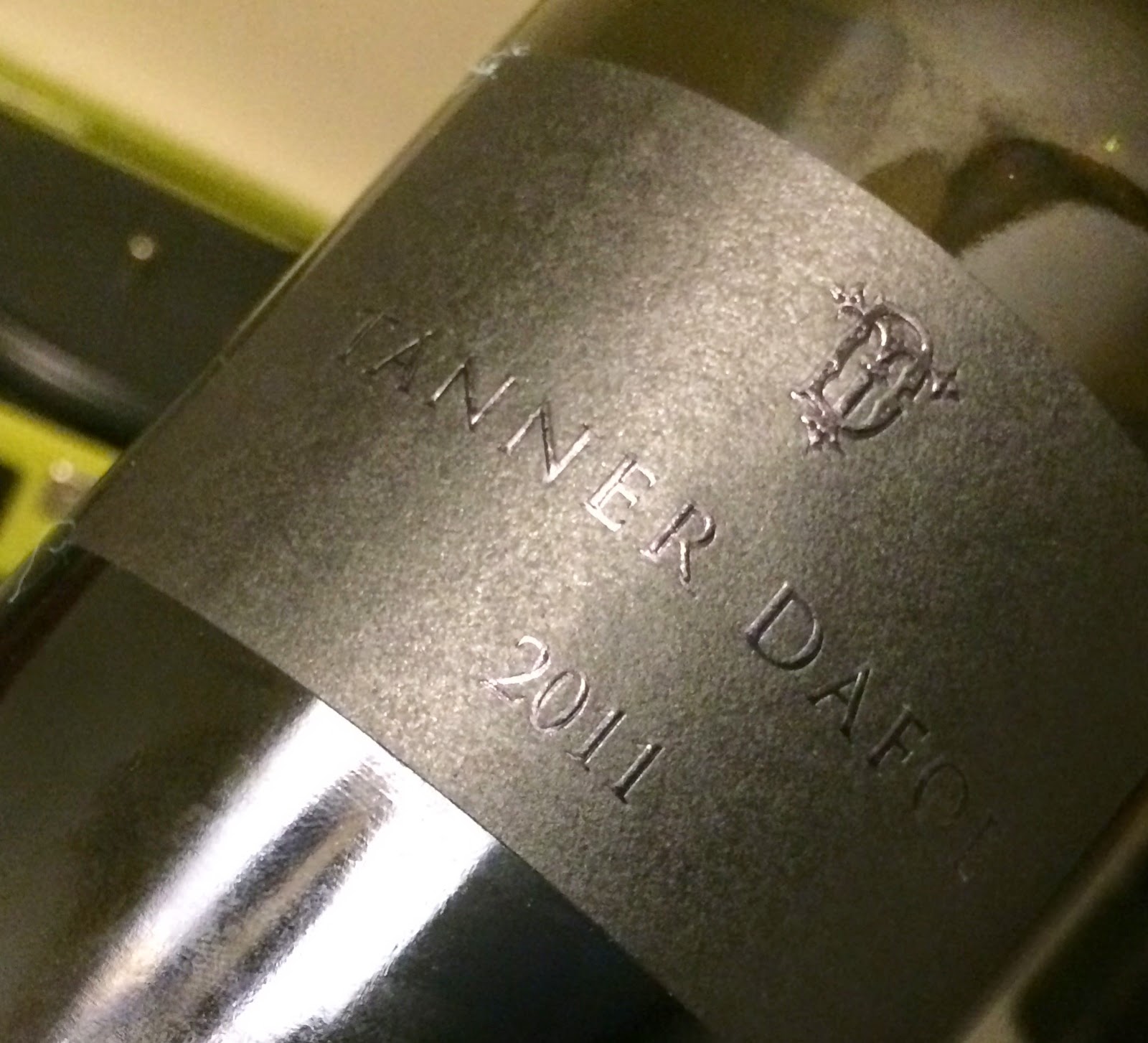 DaFoe’s harvest technique is measured. Grapes are picked in stages – acidity shines in the earlier fruit while later picks bring bigger flavors – so that the final meritage becomes a comprehensive snapshot of one vineyard’s evolving nuances.

There’s wonderful commonality in the 2010 and 2011 vintages I tasted: the nose is intense and fruit-driven, the mouth feel is rich and supple, the flavors are concentrated and layered.  The 2010 wine is remarkably clean and round, while the 2011, the product of a wetter growing season, is slightly fleshier and smokier.  Either way, a delicious blend of beauty and brawn.

I suggest to DaFoe that, quality fruit aside, he’s got a special knack.  He brings it back to his film.  “Editing hours and hours of footage for months – maybe it coded me in the theories and thought process of some fascinating people,” he says with a laugh.

And the education continues.  Recently, DaFoe spent five weeks riding solo through France, on a 1981 BMW motorcycle he restored.  “It was 2700 miles through every wine region,” he says.  “It helped me appreciate wine’s sense of place.” 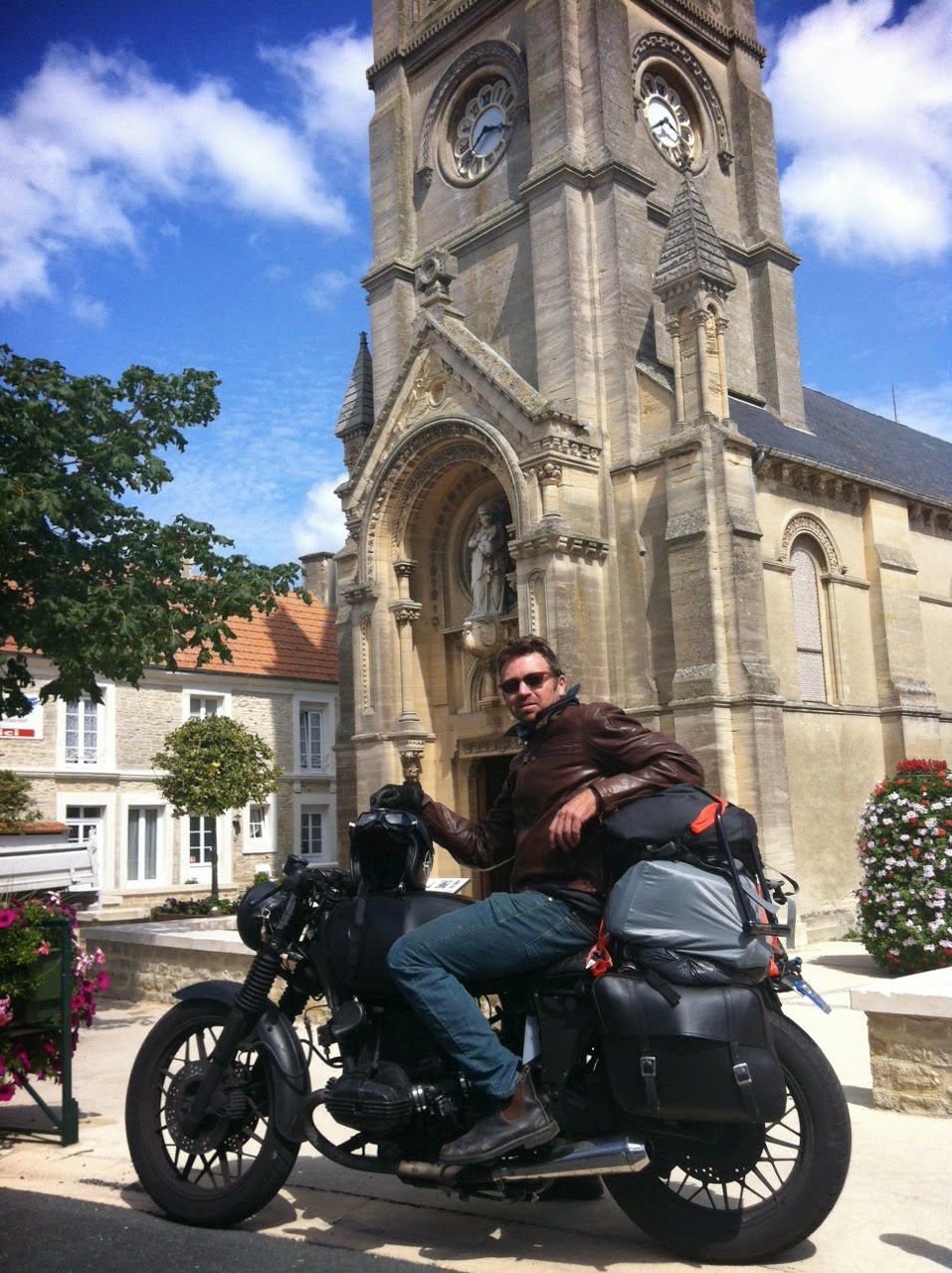 Soon, Tanner DaFoe will be releasing a second label focused on varieties like syrah and grenache.  And DaFoe has a third, solo project in the works.  But for now, it’s all about these remarkable limited production cabernets – just about 150 cases a vintage – which are available almost exclusively through an allocation list on the www.tannerdafoe.com website.  Lucky’s Steakhouse in Montecito carries it by the glass and, nearby, The Wine Grotto sells it by the bottle.  The wine retails for about $100.

by Gabe Saglie, Senior Editor, Travelzoo
published in the Santa Barbara News-Press on 1/1/15


Good news, fellow wine drinkers: 2015 looks to be another dynamic year for the Santa Barbara wine industry.  Ours remains one of the best areas in the world for wine innovation, continuing to draw fresh talent and to inspire high quality at affordable prices.  We are lucky to live at its threshold.

Here are four trends to look for as we raise our wine glasses in 2015.
Small is Big 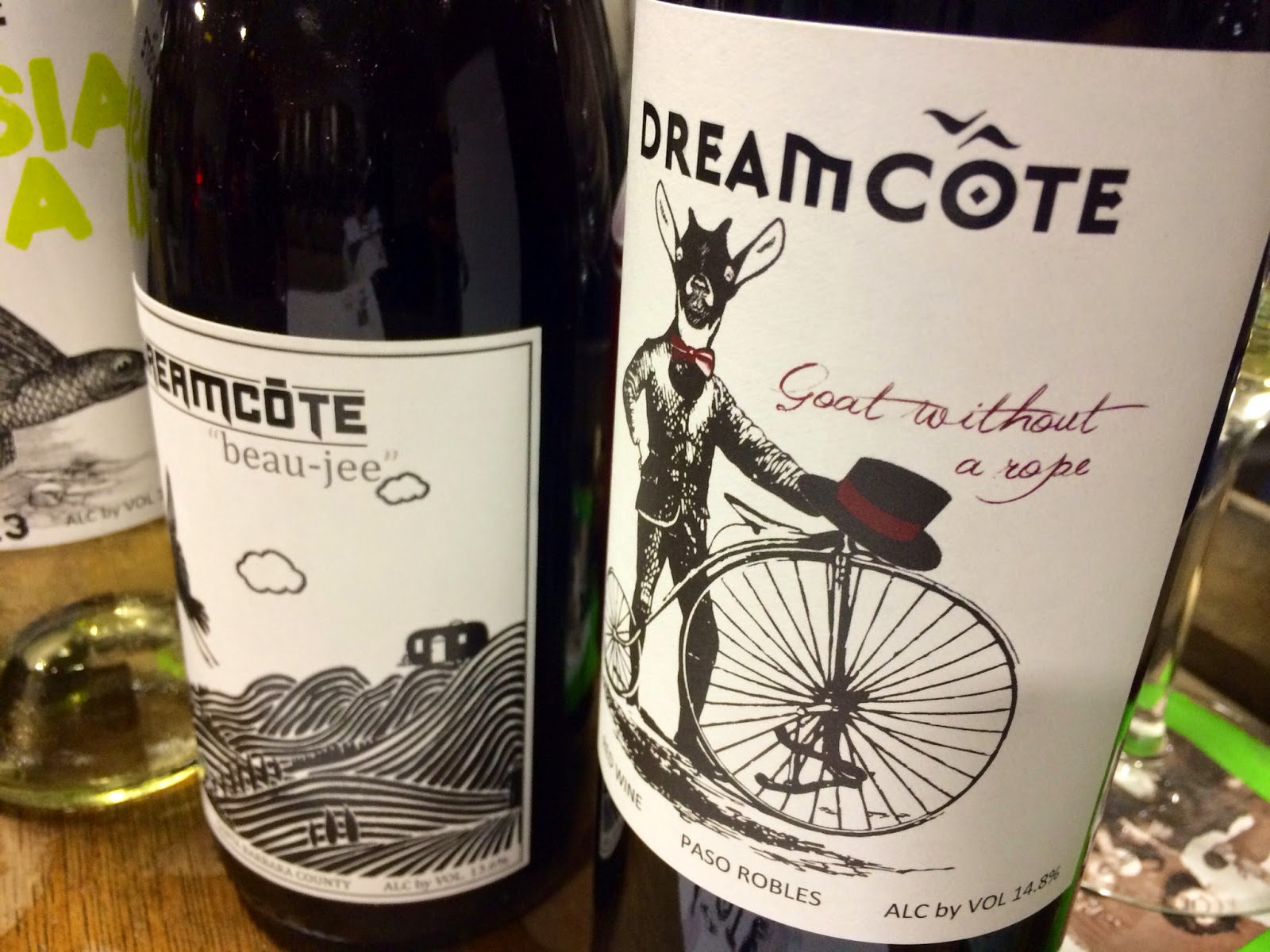 I recently attended a gathering at the Zotovich wine production facility in Lompoc that brought local writers together with boutique producers.  And one thing was clear: the little guys are ready to carry the torch.  These are small operations – a few hundred cases a year, mostly – that may not have the marketing budget or name recognition of their larger counterparts.  But their love for specific grapes and vineyards is pervasive, and the techniques they’re adopting are leading to bright, clean wines that are as approachable as they are tasty.  Look for labels like Big Tar, Dreamcote, Turiya, Frequency and No Limit.
Bubbles Galore

You have probably noticed it by now: Santa Barbara’s sparkling wine industry is on fire.  A handful of pioneers have long been dabbling in bubbles, including Norm Yost and the late, great Chris Whitcraft.  But there is a surging number of producers making bubbly now, some even going as far as bringing the laborious, intensive, hands-on production process in house.  Many are also pushing the envelope, going beyond chardonnay and pinot noir as standard ingredients and making bubbles with grapes like syrah and grenache.  We’re entering 2015 with more than 30 local producers making sparkling wine, and that number will likely grow, especially as consumer awareness grows, too.
Snazzy Events
The annual Celebration of Harvest event that I attended this October was one of the best ever.  The new venue – Mission Santa Ines in Solvang – infused a fresh, approachable feel to the annual event that, for decades, has been produced by Santa Barbara Vintners.  It was also just one of a brand new batch of interesting and oft-intimate happenings in 2014 – some designed for consumers, others for media and trade – that effectively heightened interest in local wines.  Kudos to Releve Unlimited, the local destination management company that’s partnered with the local wine industry to give it a shot in the arm with one simple premise: build it and they will come.  Next up: the Vintners Spring Weekend in April.
Vintage 2015

Hands down, last year’s most innovative marketing phenomenon in Santa Barbara was Wil Fernandez’ Vintage 2014.  Time lapse photography, video, intimate interviews, podcasts (which I volunteer-hosted) and pop-up tastings throughout the country converged to capture the 2014 harvest from beginning to end, and to elevate awareness of brands like Byron, Foxen, Carr, Buttonwood, Larner, Riverbench, Clos Pepe and Carucci.  This was a refreshingly unique, hands-on, use of multiple media platforms.  Fernandez is expanding his project with Vintage 2015, aiming to use the same approach to highlight farmers and winemakers across the U.S. and to, as he puts it, “create a permanent archive of American winemaking in 2015.”  Like its predecessor, Vintage 2015 will hinge on Kickstarter crowdsourcing, with an initial $3000 goal set for February 6th.  Donations from as little as $1 can be made at Vintage2015.com.
Happy New Year!
###
Posted by Gabe at 10:08 AM 3 comments: