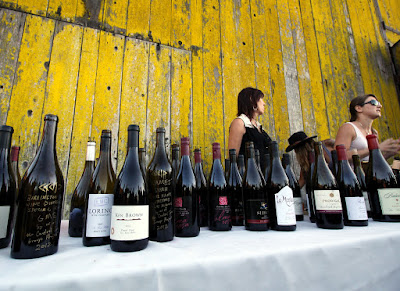 Sta. Rita Hills – the buzzing wine growing region on the western stretches of Santa Barbara wine country – is about to throw its annual party of record.

Wine & Fire 2015 is slated for August 14 and 15 with a series of one-of-a-kind wine and food events.  They will, of course, highlight many of the wine grape varieties that thrive in this region – world-class pinot and chardonnay, for sure, along with pockets of syrah, viognier, sauvignon blanc and others.  And the winemakers with roots in this region will star, too: Richard Sanford, Bryan Babcock, Rick Longoria, Peter Cargasacchi, Brian Loring, Kathy Joseph, Karen Steinwachs and Ken Brown, to name a few.

But the Wine & Fire spotlight is also on food.  In fact, the titular “Fire” refers to a sizzling BBQ seminar and tasting event on Saturday that aims to showcase grilling talents, share cooking tips and please the palate all at once.  That event, dubbed “BBQ Blast,” takes place at the Sanford & Benedict Barn (the historic vineyard dates back to 1971) and highlights the marvels of cooking by flame in four different styles.

I’m lucky enough to join the team of Rodrigo Gimenez, the Argentine BBQ phenom who’s created a cult following of sorts among Santa Barbara foodies by employing generations-old gaucho meat-grilling techniques.  After Rodrigo works his magic, our team will pair with the wines of Clos Pepe's Wes Hagen, as well as Ken Brown Wines and Liquid Farm.  Ours will be a tough pairing to beat! 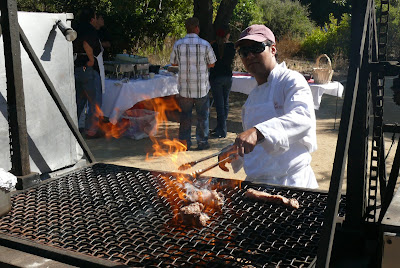 But the competition will be formidable: my friend Frank Ostini from Buellton’s Hitching Post II Restaurant will showcase the classic open-pit red oak BBQ skills that have made him famous; winemaker Steve Clifton, a pizza oven authority, will be crafting a slew of wood-fired flatbreads; and Matt Toll, of Central Coast-based Tollhouse BBQ, will be showing off his meat smoking prowess by using his big rig smoker and proprietary dry rub spices. 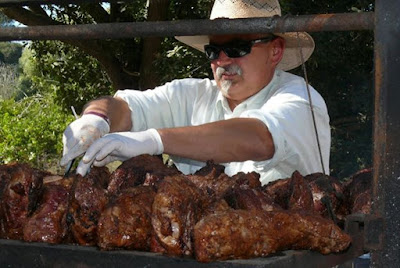 The Saturday Morning Seminar BBQ Blast takes place from 10:30am to 1:30pm and will also feature live rockabilly/folk/blues music by the two-woman Americana band, The Luck.

Bookending Wine & Fire this year are two deluxe events aimed at lovers of wine and lovers of the unique vineyards that produced the award-winning wines of Sta. Rita Hills.  On Friday night, from 5 to 8pm and also at Sanford & Benedict Barn, the Kick Off Barn Party will feature rare, library and large format wines from top producers like Pali Wine Co., Flying Goat Cellars, Gainey Vineyard, Hartley-Ostini and Siduri.  Wood-fired fare by Bello Forno and live rock music are also on the menu. 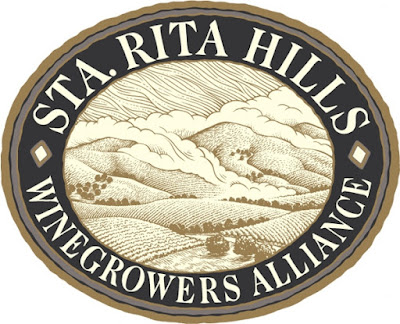 This yearly fete comes to an end Saturday night, from 5 to 8pm, with the spectacular Wine & Fire Grand Tasting at La Purisima Mission.  The sweeping, historic venue is alluring enough.  Add wines poured by dozens of wineries and gourmet fare prepped by some of the area’s premier chefs and caterers, and this is a culinary feast that’s tough to beat.

Look for open houses and special pouring events throughout the weekend, too, at places like Babcock Winery and Zotovich Cellars.  Loring Wine Co. will be pairing wine with cookies and cheese while Kessler-Haak will be hosting a Sunday brunch (including sparkling mimosas!) in the vineyard.

by Gabe Saglie, Senior Editor, Travelzoo
photos by Saglie and Bob Dickey
story published in the Santa Barbara News-Press on 7/16/15

When Daniel Gehrs graduated from UCSB in 1973, local wine jobs were scarce.  “The industry wasn’t even in its infancy, it was in its gestation period,” he tells me with a laugh.  We’re sitting in the shady courtyard behind his Los Olivos tasting room, sipping through his latest releases.

So Gehrs and his new bride, Robin, would spend the next two decades in the Santa Cruz Mountains.  He honed his winemaking skills at Paul Masson and helped found Congress Spring Winery.  In 1980, a pinot noir he made got honors from Wine Spectator Magazine.

Gehrs’ eponymous label – Daniel Gehrs Wines – was born in 1990, and it was soon after that Santa Barbara would come calling again.  “The wine region area here was well-established by the early 1990s,” recalls Gehrs, who took a job as Zaca Mesa’s winemaker in 1993.  And he kicked off his local career with a bang: a ’93 syrah he made nabbed the #6 spot in Wine Spectator’s coveted Top 100 Wines of the Year list, a remarkable first-ever nod for Santa Barbara County.

“It blew everybody away and helped launch syrah and Rhone varieties here seriously,” says Gehrs, who admits he’s got just two of those celebrated bottles left.

In the years since, Gehrs has solidified his standing as one of the most awarded winemakers in Santa Barbara County and, in my opinion, one of the most talented.  Mild-mannered and soft-spoken, he has a natural knack for making wines that are consistently nuanced, complex and delicious.  “I’ve worked a lot on tannin management, to control extraction,” he tells me.  “I’m aiming for smooth, and I like to have no jagged edges.”

His skill made him a consulting winemaker for labels like Sunstone and Lucas & Lewellen for many years, as well as the founding winemaker for Bridlewood Winery.  He’s focused exclusively on his own label now, though. 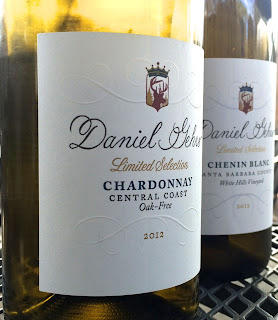 A big part of his winery’s focus is on keeping pricing low.  Most Daniel Gehrs wines range between $15 and $25.  “At the onset of the recession, we made the conscious decision to steer the brand from high-end to middle-premium,” the winemaker says, “and that saved our bacon.”

“It’s actually part of our outlook on life,” adds his wife, who just retired after 21 years of teaching second grade at Santa Barbara’s Adams School.  She’s brought her own glass to join us in the courtyard.  “Wine should be a part of the diet, and the world would be a better place if everyone could afford to drink good wine.  Trophy wines are not part of our world view.”

And yet the Gehrs wines are consistent trophy winners at major competitions, further enhancing their value.  And drinking through them is a delight.  The 2012 Chenin Blanc ($19) has a butterscotch bouquet, layered flavors and a refreshing finish.  “It’s among the most age-worthy whites,” Gehrs says.  The unoaked 2012 Chardonnay ($24) is Chablis-inspired, a blend of citrus fruit and apple flavors with bright acidity.  “That’s the holy grails with this wine: that it goes well with food,” Gehrs declares.  The 2012 Syrah ($24) has rich cherry flavors but a wonderfully clean mouth feel.  And the 2102 Cabernet Sauvignon ($24) – the Gehrs’ best-selling wine – is smooth and brimming with dark berry flavors. 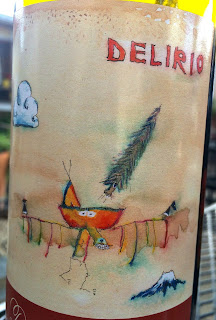 Other Gehrs wines worth discovering include his gewürztraminer, merlot and Fireside Port.

To commemorate the 25th anniversary of his winery, Gehrs has launched a brand new label, “Rockers: Rarities by Daniel Gehrs.”  The project opens the door to unique blends – “a creative outlet, a chance to break the mold,” Gehrs says.  And for the consumer, “a leap of faith.” 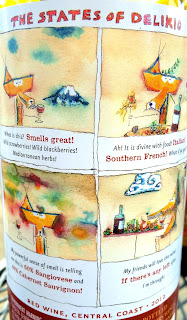 The 2012 Rockers Delirio ($30) is a rich Super Tuscan, a 60-40 blend of sangiovese from Santa Ynez and cabernet from Monterey.  Serious but approachable, this super food-friendly wine has a fruit nose, a cherry pie essence on the palate and a clean finish.  The colorful label features a whimsical drawing by Neil Crosbie, the former owner of Santa Barbara’s Blue Agave Restaurant. 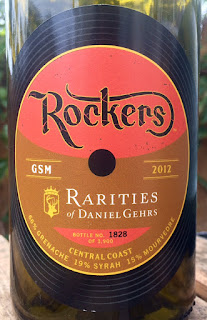 The 2012 Rockers GSM ($30), with a label modeled after a vinyl record, harkens back to Gehrs’ Rhone roots at Zaca Mesa and is intricate, structured and delicious.  This 66-19-15 blend of grenache, syrah and mourvedre exhibits a glamourous nose, juicy black cherry and rhubarb flavors and an almost wild earthiness.  “Its approachability is deceptive,” admits Gehrs, “because it will age really well.”

Both wines are available only through the popular Daniel Gehrs tasting room in Los Olivos, which opened in 2000 inside a century-old cottage.  It’s located at 2939 Grand Avenue and open seven days a week.