By Gabe Saglie
(published in the Santa Barbara News-Press on April 12, 2012)

That the Murphy family’s new Santa Maria property is shaped a lot like an isthmus smacks of serendipity.

“We were looking for a great piece of pinot noir-growing land with a little bit of soul,” says vintner Matt Murphy with a distinct Southern inflection.  His family’s find off E. Clark Avenue in 2007, which came after a year’s worth of hunting through pinot hot spots like Carneros and Lompoc’s Santa Rita Hills, fit the bill for clear viticultural reasons.  The plot’s pervasive sand-like soil drains extremely well and its proximity to the Pacific Ocean (the Murphy’s property is the second western-most vineyard in the Santa Maria Valley) creates ideal maritime growing conditions.  But sentiment was a factor here, too. 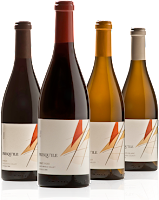 When Hurricane Katrina slammed into the Gulf Coast on August 29, 2005, it wrought widespread devastation.  Most of us know the story of New Orleans’ tragedy well; images of leveled levees and the decimation that followed dominated the national media for weeks, and rightfully so.  But the waste on neighboring states, Mississippi especially, was no less distressing.  The Murphys know that well, since their family compound -- a 14-acre property on Henderson Point in Pass Christian which stretched, in the shape of an isthmus, straight out to the Gulf’s shores – was demolished.

“It was home to us,” says Matt of the land that had been in his family for generations, and which hosted dozens of his relatives during summer months, mainly, for years.  “And it’ll never be the same.”

That family plot had been dubbed Presqu’ile by Matt’s grandfather, “who loved to throw French words at everybody,” Matt quips.  The word (pronounced “press-keel”) translates to “almost an island.”

A year later, during the wine grape harvest of 2006, Matt found himself working at Bien Nacido Vineyard in Santa Barbara wine country.  He’d already spent previous vintages in Napa, learning the business of growing grapes and selling wine.  This was the year he’d get to know an increasingly renowned region called Santa Maria.

The 2006 harvest had also brought Dieter Cronje to Bien Nacido.  He’d already been trying his hand at winemaking for four years in his native South Africa and had developed a zeal for pinot noir.  “I love to make it because it’s tough to make,” he says with a southern accent of a totally different kind.  To stretch his wings, “it was either Burgundy or the United States for me, and since I knew my lack of French would make Burgundy tough, I came to the States,” he says with a laugh.  The weather helped set his sights on Central California instead of Oregon.

When Matt and Dieter met at the height of the grape-picking season 5-1/2 years ago, the unlikely duo quickly realized they shared a passion.  And not just for pinot noir.  The two will tell you they are fiercely focused on making wines that are balanced, not just big.  “We’re different from our peer set in that we don’t really care about higher or lower alcohol,” says Matt.  “We’re after wines with finesse, so it’s more about acidity.”  And they are committed to making wines naturally, from sustainably farmed fruit and with minimal human intervention.  “We take a minimalist approach to get wines that are pure,” insists Dieter, who uses predominantly neutral French oak barrels to age his wines.  To attain a genuine expression of fruit, “the site where your grapes grow is all that counts,” he says.

Driven in large part by Matt’s enthusiasm, the Murphy family purchased 185 acres of Santa Maria land in 2007.  It was a flower field then – gladiolas as far as the eye could see.  But the promise for growing great grapes was palpable.  And the fact it looked a heck of a lot like an isthmus was good fortune, at least.  They named their new property, for purely sentimental reasons, Presqu’ile.

Today, after a subsequent purchase of abutting acreage, Presqu’ile stretches across 196 acres and, thanks to cultivation that started in 2008, is planted to pinot noir, mostly – 31 acres.  There are also 15 acres each of chardonnay and sauvignon blanc, seven acres of syrah and just over an acre of nebbiolo.  There’s a brand new, sleek dwelling onsite, too, which Matt and his wife, Amanda, call home.  (Matt’s brother, Jonathan, and sister, Anna, live in the Santa Maria Valley now, too, and parents Madison and Suzanne split their time between their new Central Coast home and their long-time residence in southern Arkansas).

And there’s a budding development project on the property, too: wine caves that the Murphys are building into the side of a hill, complete with an elevator that will take visitors to a winery and tasting room above.  “When the doors open at the top, you get views of the Guadalupe Dunes and Avila Beach on a clear day,” boasts Matt.  Doors to this on-premises visitor experience will open in spring of 2013.

But the public won’t have to wait that long for a first-hand Presqu’ile experience.  Its other, offsite tasting room will be opening up later this month, on February 29th, at 2369 Alamo Pintado Avenue, right down from the landmark flagpole, in downtown Los Olivos.  If this writer’s research is correct, it’ll be the tiny town’s 38th wine tasting room.  But it’ll be a destination in its own right, as it’ll offer the wine buff direct access to what’s quickly become one of the most buzzed-about labels in Santa Barbara County.  Dieter’s natural knack has a lot to do with that.

Presqu’ile’s current yearly production is about 2200 cases.  And as far as I’m concerned, the label’s 2010 sauvignon blanc may be one of the label’s greatest achievements.  Typically relegated to hot weather zones like Los Olivos and Santa Ynez, this cooler-weather version sauv blanc is remarkably crisp, with a delectable mineral streak and an oh-so-subtle creaminess.  “Southern hemisphere aromatics of gooseberry and fig,” adds Dieter.  This wine was fermented not in a stainless steel tank but in a 6-foot, 2-inch, 160-gallon egg-shaped structure made of concrete.  Amusingly adorned with a sombrero on top, the crew affectionately calls it, “el huevo.”  Bottom line, this is one of the best Santa Barbara County sauvignon blancs I’ve had in years.

“El huevo” was also used to age Presqu’ile’s 2010 Chardonnay, made from Solomon Hills Vineyard fruit.  It’s refreshingly clean, and refined, with hints of green apple.  (The 2011 chard is the first to use proprietary grapes and is due out in 2013.)  The label’s 2010 Rosé is all-pinot and made from the some of the very first Presqu’ile fruit to come online.  It’s approachable, floral, fresh and lovely.

Presqu’ile produced three pinot noirs in 2009, including the very first using estate fruit.  That one may be the most complex of all; it’s richly supple and generous in dark stone fruit, spice and earth.  The “Rim Rock” pinot was sourced exclusively from a small vineyard in San Luis Obispo and was fermented inside concrete, which, like oak, allows for breathability but which, unlike oak, imparts no flavors; this wine is deliciously approachable, stylish, earthy and smoky.  The pinot noir labeled “Santa Maria Valley” features equal parts estate grapes and fruit from Solomon Hills Vineyard; it’s elegantly extracted, with generous pepper and cherry, and a wonderfully lithe mouth feel.

For more information, check out www.presquilewine.com.