A rose by any other name may still be a rose.  But when it comes to grapes, nomenclature is a big deal.  Just ask anyone who makes wine in the Santa Rita Hills.

This month marks 10 years since this special grape growing region received federal recognition.  In 2001, the Bureau of Alcohol, Tobacco and Firearms agreed with area viticulturists that the land nestled roughly between Buellton and Lompoc was unique – unique in its geology, geography, soil and climate.  And so an official federal appellation, or AVA (which stands for American Viticultural Area) was assigned, and the Santa Rita Hills were born.

This weekend, a series of events known as Wine & Fire will allow the public to join a wine-inspired celebration a decade in the making.

That’s not to say that the region – which spans roughly 100 square miles – didn’t already enjoy its own impressive history.  Pioneer growers were planting grapevines here in the early 1970s; men like Pierre Lafond, who founded Lafond Vineyard, and like Richard Sanford and Michael Benedict, whose namesake vineyard, Sanford & Benedict, would become a veritable landmark.  But it wasn’t until a concerted effort was launched in the late 90s to acknowledge aspects of the area that distinguished it from its neighbor wine valleys that attention en masse descended on the Santa Rita Hills.

Until 2001, there were only two AVAs in Santa Barbara County, the Santa Ynez Valley and Santa Maria Valley.  The two areas had long been recognized for growing world-class wine grapes.  But something special happens in the vineyard lands west of Highway 101 and stretching around Highway 246 and Santa Rosa Road.  It’s the only stretch between Alaska and Chile – that’s to say, in all of North and South America – where mountain ranges run east-west, rather than north-south.  What’s created by the Santa Rosa Hills and the La Purisima Hills, which flank the Santa Rita Hills AVA’s official borders, is a veritable funnel for ocean influences.  A maritime corridor, many growers calls it, which allows for cool air, wind and fog to roll in with very few barriers off the Pacific Ocean.  This unique climate – which generally allows grapes to hang longer on the vine and to develop key factors like flavor, concentration and acidity – combines with special soils and a varied sloping landscape to create a one-of-a-kind growing region in California.

The credit for much of the grunt work that led to AVA approval – research, data collection and submission – goes to Wes Hagen, vineyard manager and winemaker at Clos Pepe Vineyard, located off E. Highway 246.  The vineyard’s founder, Steve Pepe, recalls that when he and wife Kathy left Long Beach and began planting grapes on their new estate in 1996, “there were only six other vineyards here and just three wineries.”  Led by the insight of acclaimed viticulture consultant Jeff Newton, they limited their plantings to the Burgundian darlings, pinot noir and chardonnay.  “You can gain a degree of heat for every mile you drive east from Lompoc,” Pepe says.  “If Lompoc is like Champagne (in France), then where we are, it’s Burgundy.”

In fact, the Santa Rita Hills have gained fame, especially in the last decade, as a tour de force region for pinot and chardonnay, specifically.  Other grapes are grown nearby, including syrah, pinot gris and riesling.  But of the roughly 3000 acres planted to wine grapes, some 2,000 belong to pinot noir alone, and just under 500 to chardonnay.  “That still means that only 10% (of the region) is planted,” says Hagen. 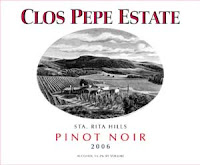 The official AVA in 2001 finally allowed winemakers to put that distinction on their labels; until then, bottles of wine made in this region were labeled as being from the Santa Ynez Valley, an area also popular for vastly different varieties, like merlot and sauvignon blanc.  By being able to list Santa Rita Hills by name on wine labels, wineries had a new marketing tool at their disposal, as well as the ability to define their wares by the special sense of place – viticultural pedigree, perhaps – that define the grapes they sourced.

It should be noted that the zone’s official name was shortened in early 2006 to Sta. Rita Hills  -- that’s the appellation that appears on all bottles produced here since -- because of a legal challenge by a Chilean Winery that had long been using the Santa Rita name.

For the consumer, a more specific AVA on the label means more accurate information and the ability to “better distinguish between growing regions,” says winemaker Brian Loring, who partners with his sister Kimberly to produce 14 vineyard-specific wines, mostly pinots, from throughout California under the Loring Wine Company label.  “People forget that California is huge, so knowing specifically where grapes came from can give you a good idea of style,” he says.  “A pinot from the Russian River Valley is going to be lighter, while a pinot from Santa Lucia is going to have more mid-palate weight.  In the Santa Rita Hills, we’re at a lower latitude, so we have more daylight hours and fruit can really ripen,” he continues.  “So a pinot from here will tend to be bigger, beefier.”

Loring makes three Santa Rita Hills pinot noirs, but admits each is distinct.  He’s been sourcing pinot noir from Clos Pepe since the first year the vineyard produced fruit, in 2000, and “I love the spice and structure my wines get from those grapes,” he says.  He also makes pinot with grapes from the Cargasacchi Vineyard – “A big, burly but pretty wine,” he calls it – and from Rancho La Vina.  “That one’s a monster,” he declares.  “A lot of depth and the darkest juice you’re ever going to see.”

As head winemaker for Foley Winery since September of last year, Leslie Mead Renaud agrees that vineyard diversity, even within the comparatively small Santa Rita Hills region, is key to the merits of individual wines.  She oversees the production of four pinot noirs and four chardonnays whose fruit are sourced from specific blocks on the company’s two proprietary vineyards, Rancho Santa Rosa and Rancho Las Hermanas.  “They’re only two-and-a-half miles apart, but the weather conditions at each are vastly different,” she says.  Rancho Las Hermanas is further west, closer to the sea, and so generally cooler.  “The grapes have higher acids and the pinot tends to be more feminine, not as big.”

Renaud spent many harvests in northern California before her move to the Central Coast last year, and she admits there’s still a growing industry buzz about the Santa Rita Hills.  “I credit very careful attention during planting, like choosing the right root stocks,” she says.  That type of know-how, combined with access to modern-day equipment and techniques, is a cornerstone advantage of any young AVA like Sta. Rita Hills.

Today, the area is defined by “a great attitude, “ Renaud continues.  “People are working together toward a common goal – promoting the region – so we all have a vested interest in helping our neighbor to what they do well.”

To celebrate the 10th anniversary of the coveted Sta. Rita Hills AVA, the Santa Rita Winegrowers Alliance is putting extra weight behind promoting its annual Wine & Fire event, which takes place this weekend.  Among myriad events, Clos Pepe Vineyard will host an intimate dinner Friday night featuring more than a dozen Clos Pepe and Loring Wine Company wines that span the decade, as well as six courses of gourmet food designed by popular New West Catering.  On Saturday morning, a seminar at Alma Rosa’s El Jabali Vineyard will feature local winemakers who’ve won accolades for the wines they’ve made using Santa Rita Hills fruit, including Richard Sanford, Bruno D’Alfonso and Kathy Joseph; they’ll discuss the region’s past, present and future.  That afternoon, Foley Estate will host its annual Pinot Noir Release Party, with barrel samples and bocce tournaments.  Saturday evening, the historic La Purisima Mission in Lompoc will provide a magical setting for a grand tasting of the area’s premier wines, featuring labels like Demetria, Gypsy Canyon, Sweeney Canyon, Longoria and Hitching Post.  And on Sunday, various wineries will host open house events, including a barrel tasting brunch at Clos Pepe, a meet-and-greet with the winemakers at the D’Alfonso-Curran winery on Santa Rosa Road and the first-ever tasting of library wines at Alma Rosa Winery.

For more information on all of this weekend’s events and multi-day passport options, check out www.staritahills.com.
Posted by Gabe at 11:26 AM