By Gabe Saglie
(published in the Santa Barbara News-Press on June 21, 2012)

Riverbench just became the latest Santa Barbara County winery – and one of a very few – to take bubbles seriously.

“The idea started for completely selfish reasons,” general manager Laura Mohseni tells me with a laugh.  “I just love drinking sparkling wine and my bosses are very indulgent.” 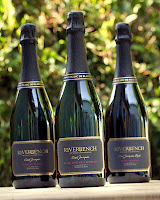 The new Riverbench lineup of sparklers was released just a few days ago at an industry gathering at its Santa Maria tasting room.  The trio – under a label playfully dubbed “Cork Jumper” – includes a blanc de blancs and a slightly sweeter blanc de blancs demi-sec, both chardonnay-based, as well as a rosy blanc de noirs, made from pinot noir grapes.  All are made entirely from proprietary fruit.

What’s exciting about this project, especially for those of us who love to sip on bubbly throughout the year (and not just on special occasions), is that it helps fill a gaping hole in Santa Barbara wine production.  True, several of our great local winemakers have, in fact, ventured into sudsy territory; talents like Chris Whitcraft, Blair Fox, Dave Potter and Steve Clifton have dabbled in bubbles.  But much of it, at least thus far, has been a singular endeavor, if not an arbitrary one on random vintages.   Norm Yost has, for many years now, been very much a lone local crusader in this arena, producing remarkable sparkling wines under his Flying Goat label.  So to have another player enter the fray with a plan to make three distinct bubblies – and to make them annually – is a boon for the industry, not to mention the palates of many a thirsty consumer.

This project started as an experiment of sorts in 2008.  Yost was sourcing some of the grapes for his own sparkling wines from Riverbench’s neighbor, Sierra Madre Vineyards.  So the thought struck Mohseni: how would sparkling wine made from their own estate fruit fare?

Riverbench released a single Cork Jumper blanc de blancs in 2008 and then again in 2009, and the acclaim was swift and upbeat.  The wines enjoyed the added triumph of being the county’s first ever certified sustainable sparkling wines.  Riverbench, which was originally planted in 1973 and saw a second round of plantings in 2007, has long been known for its environmentally minded grape growing.

With back-to-back experiments a success, the 2010 vintage gave birth to a far more committed sparkling wine program at Riverbench.  The Blanc de Blancs (171 cases, $35) is a graceful  embodiment of the natural brilliant acidity found in the winery’s estate chardonnay grapes; elegant yeastiness and a bright mouth feel prevail, as well as clean tropical and citrus flavors.  The Blanc de Blancs Demi-Sec (99 cases, $32) is very similar in mouth feel and enjoys that traditional soft sweetness without being cloying.

The crowning achievement of the 2010 Cork Jumper series may be the pinot-based Blanc de Noir (354 cases, $45).  Vibrant and fun, yet complex and sophisticated.  Mohseni marvels at the “pomegranate and tangerine flavors we don’t normally see in our still wines.”

Riverbench winemaker Clarissa Nagy is also touting the new sparklers, and she is excited at the “killer response” they’ve received early on.  (Like Mohseni, she’s an unabashed fan of regular sparkling wine consumption.)  She joined the winery just late last year, so she didn’t get to share in the production of the 2010 bubbles.  But she’ll be spearheading the program each vintage moving forward.

Making sparkling wine is “definitely tougher, more expensive, and more time consuming” than making still wines, she tells me.  That may account for its very limited production, locally.  “It’s a labor of love for sure,” she adds.  But based on the wines’ merits early on, and because “people do like to drink local,” Nagy is confident the program will gain consumer traction quickly.

Each vintage, Nagy will be in charge of making the sill base wines.  When I ask her if she’ll source grapes earmarked for sparklers any differently, she says, “I might pick fruit with some crisper acids and brighter fruit.”  But she insists, “I don’t have a magic number.  I pick for ripeness and for balance.”  The still wines will then be transported to Napa, where renowned French winemaker Gerald Ployez will employ traditional methode champenoise techniques to bring them to effervescent life.  “He’s got all the equipment and the space,” says Mohseni, “and the knowledge.  His family has been making Champagne for generations.”

The public will get its first chance to taste through the three new Cork Jumper sparklers this Sunday, when Riverbench is featured as part of the monthly BYOB wine dinner series.  The event, which takes place at Max’s Cucina on Upper State Street, will pair the bubblies with a special selection of cheeses and a three-course meal (including a seafood and vegetable paella).  As is customary with these BYOB dinners, each attending couple is asked to bring an extra sparkling wine or two to share during this casual, family-style yet decidedly gourmet dining experience.  Limited seating remains.  Mohseni and Nagy will attend, and I’m looking forward to jumping over a few corks that night, myself.