Mikael Sigouin is proud of his title, Grenache King.

“I didn’t name myself, it was my peers,” he admits. “But I’m pretty sure I’ve worked with more grenache than most people in the state.”
The Oahu native began his love affair with the Rhone grape (and the most widely planted red wine grape in the world) in 1999, his first harvest at Santa Barbara’s Beckmen Vineyards. He speaks of grenache in devotional terms: “It deserves to be shown respect. Even if you think you’re doing everything right, you still need to nudge things in her direction, where she wants to go. Just like with any woman. And it has the greatest payoff in the world.”

Sigouin attributes an upbringing shaped in large part by affectionate women, and by a pervasive respect for women, for his kinship with grenache. Many of his peers, he suggests, don’t have the necessary patience to allow grenache to reach its full potential. It can be so prolific, “they plant it in hot places and let it grow and grow to use as a bulk wine producer,” he says. Sigouin’s hands-on vineyard approach includes dropping two-thirds of his fruit to allow the best grapes to grow, regularly manicuring and picking late in the season. “It’s a waiting game, it takes patience,” he insists. And when you give grenache all the time it deserves, “the skins thin out, color comes out, you get that beautiful character of the tannins and this great texture and minearality.”
Sigouin launched his label, Kaena (Hawaiian for “potential for greatness"), in 2001; after juggling stints at both Fess Parker and Beckmen (as head winemaker), he went full time with his pet project in 2014. He now makes about 5000 cases of wine a year, including a grenache blanc, a grenache rosé and eight different grenaches, most of them vineyard-specific. “I’ve isolated some places that grow really great grenache,” says the winemaker. That's important, because the flavors of grenache very much reflect the site where it grows, he says. “Ballard Canyon, between Buellton and the 154 – that’s the sweet spot. Not too hot, not too cool, just right.” 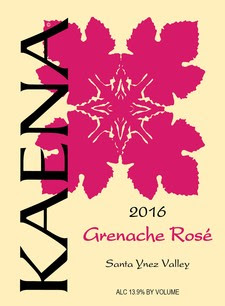 It makes perfect sense, then, that Kaena would consider International Grenache Day a legit holiday. It celebrates it in style each year, and this year’s fete with Jeff Olsen at Buellton noshing hot spot Industrial Eats fires on all gastronomic cylinders. It takes place Friday, September 15, at 7pm, and just a handful of $100 tickets remain. Get yours at kaenawine.com.
After Sigouin insisted that “pork and grenache is the ultimate pairing,” I got a sneak peek at Chef Olsen’s six-course menu:  oyster, uni and avocado paired with Kaena’s 2016 grenache blanc (a wine so tasty, “it makes you salivate,” says Sigouin); tomatoes, melon, green chile and grilled ciabatta bread matched with the 2016 grenache rosé; pork shoulder in a Korean bossam style with gems, herbs and kimchi, along with the 2015 Santa Ynez Valley grenache;  achiote and orange-braised pork with avocado, queso fresco and corn tortillas, with the 2015 Tierra Alta grenache; pomegranate-grilled pork ribs with rosemary and roasted peppers, coupled with the 2015 Ali’i grenache; and warm chocolate soufflé cake for dessert, with chocolate-Nutella ice cream and the unctuous 2015 Larner Vineyard grenache.
You can’t go wrong with Olsen in the kitchen; check him out at industrialeats.com.
And all the wines are on store shelves now, including the popular Kaena tasting room in Los Olivos.
Want more wine, food and travel news? Follow me on Twitter and Instagram!