By Gabe Saglie
(published in the Santa Barbara News-Press on October 6, 2011)

“The possibilities for living a Caliterranean life are endless.” 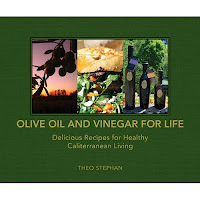 This is how Theo Stephan ends her new book, “Olive Oil and Vinegar for Life: Delicious Recipes for Healthy Caliterranean Living,” which is set for release next week.

But it’s also a good place to start.

Stephan was born to Greek parents and into a household where cooking the Mediterranean way readily reigned supreme.  In her book, she recounts her earliest memory of tasting olive oil, at age eight, when her aunt Lou dipped a hunk of hamburger bun in it and had her take a bite.  “My mouth immediately welcomed the buttery, fresh, flowery fruitiness that is Kalamata Extra Virgin Olive Oil,” she writes.

Fast-forward a few decades to the mid 90s, when Stephan, now a successful graphic designed based in Dayton, Ohio, found herself visiting Southern California regularly on business.  The climate and the land struck a chord with her; it recalled, in many ways, the place from which her own family had come.  She invested in a fixer-upper ranch in Los Alamos – a haven, of sorts, during her regular cross-country works trips – which happened to be home to 50 olive trees.  And then, what she calls her “eureka moment.”  She recalls thinking in her new book, “Why not start my own brand, grow and sell olive oil from that handsome property and quite possibly, daringly change my life forever?”

That leap of faith came in 2001, when she sold her Dayton-based business and launched Global Gardens, a company aimed at cultivating local olive oils, vinegars and food products, and sourcing quality ones from around the globe.  Five years later, she opened a quaint storefront by the same name in the heart of Los Olivos, the only food-tasting venue amidst dozens of wine tasting ones.  And her purpose remained the same: to further what she would ultimately call, and officially trademark as, the “Caliterranean” lifestyle.

“I was in the shower when I thought of the word,” she told the News-Press.  “It just washed over me.”

For Stephan, California is unique in the way it mirrors the Mediterranean not only in its natural distinctiveness and abundance but also in the way its people embrace a healthier way of life.  “I really see us Californians as starting and leading this trend toward learning about nutrition and understanding the importance of eating fresh and local,” she says.  “With all our obesity and health issues today, we have more opportunities here to broaden the healthful aspects of our lifestyle and to introduce it to the entire country.”

And that’s the crux of her new culinary tome.  The book reads as much as an anthology of olive oil- and vinegar-based recipes as a prose-style introduction and guide to Stephan’s favorite ingredients.  History, nutritional information and storytelling combine to create an assorted, thorough, stunning book.

The hardcover, with its textured olive-green cover, impresses from a physical standpoint alone.  Oversized and solid, it resembles a weighty coffee table book.  The design was all Stephan’s; her former professional incarnation was put to good use.  And most of the photography was hers, too.  The food shots are eye-popping and rich, as are the myriad landscape and detailed close-ups featured prominently throughout the book.

This literary project also became a family affair.  Stephan’s two daughters – sisters Sunita, 17, and Anita, 16, whom she adopted from Nepal 10 years ago and who work the Global Gardens store in Los Olivos every summer – each contributed.  The eldest was responsible for much of the food design featured in the book; the youngest, a budding photographer, added her fair share of food snapshots.

“We did a lot of cooking for this book, and everything was measuring and taking pictures,” says Stephan.  She continues with a laugh, “It was a real joke with the girls because we couldn’t eat anything without photographing it, and when we were done, it was like something was wrong when we’d sit down to it something without shooting it.”

Involving her children was also a way for Stephan to deliver a message to her readers about the importance of introducing healthier cooking styles early.  “When the girls were little, I’d only do their grilled cheese sandwiches in Kalamata [oil],” she says.  “Our taste buds develop early, and kids are receptive to healthier foods when they are part of the selection process.  It creates harmony.”

Stephan began working in earnest on her book last autumn, after the olive harvest, and it took “a lot of discipline, and having to calendar everything out,” the author says.  It required a rigorous travel schedule, including visits to Death Valley to shoot the pictures for the book’s section on “Campsite Dishes” and to Mendocino, “where I put together 12 courses for 12 people,” Stephan says.  Location shoots also took place throughout Santa Barbara County, San Diego and Napa.

But the most time consuming aspect of the book prep took place in the kitchen.  Stephan’s goal, after all, was to show how olive oil can entirely substitute popular, less healthy alternatives, like butter.  And that meant retooling and retesting a lot of recipes.

“I had to play with recipes a lot to figure out dimensions,” she recalls.  “Like when I wanted to come up with a good pie pastry.  I wanted it to be light and flaky but not too wet, or it would fall apart.  So I froze olive oil in tablespoon increments in an ice cube tray, and that was my substitute for butter patties.

“You have to work really fast and you can’t touch it a lot because gets really chewy,” she learned.  “But figuring that out was my biggest thrill and my biggest surprise.”

For the reader, the surprises may also abound, especially when recipes for popular dishes force them to reach for an olive oil bottle from the pantry rather than a butter stick from the fridge.  All reference the lineup of Global Gardens products, 15% of which Stephan produces herself from olives harvested on her Los Alamos ranch and Los Olivos home (and which won six medals at this year’s L.A. County Fair), and the rest of which she imports from boutique purveyors from places like Crete and Italy.  In the book’s “Breakfast Recipes,” for example, Stephan’s “Stuffed French Toast” calls for her Santa Ynez Italian Varietal Blend Extra Virgin Olive Oil while her “Fig ‘N Egg Omelet” requires both for some Global Gardens Meyer Lemon Extra Virgin Olive Oil and the Global Gardens Fig Balsamic Vinegar.

The bill of recipes may require the at-home cook to stock up on some new products and rethink the way standard foods are made, but it easily appeals on a fundamental, appetizing level.  The “Beginnings” section features recipes for an “Avocado Olive Salad” and “Mini Chevre Peppers.”  Seafood aficionados will find the “Scallops Ceviche and Red Curry Delight Sauce” especially tantalizing, while recipes for “Smoked Mendo Tri-Tip,” “Oven Roasted Chicken Supreme” and “Eggplant Caliterraneanna” – a baked delicacy featuring Farga Extra Virgin Olive Oil and two cheeses – will nab budding chefs with an appetite for something heartier.

The aforementioned “Campsite Dishes” includes recipes for “Death Valley Deviled Eggs” and “Campfire S’mores with Solar Sauce,” both of which call for Mission Manzanilla Extra Virgin Olive Oil.  “I love to go camping,” Stephan says, “but that doesn’t mean I have to starve.”

And “Desserts” include a mouth-watering array of sweet treats, from “Perfect Pecan Pie” (featuring that tried and tested pie pastry), a “Smoked Salt Chocolate Tart” and, of course, “Not Your Mother’s Baklava.”

There’s even a pair of recipes for Koroneiki olive oil -based “munchies” for dogs and cats.

Among Stephan’s own recipes are two that offer a healthy dose of nostalgia for her.  The “Lemon Garlic Veggies” are fried.  “If you’ve ever been to Greece and tasted fried zucchini and fried eggplant, you know it’s a real staple there,” she says.  She suggests Kalamata or Koroneiki Greek Extra Virgin Olive Oil in her recipe, which “tastes just like Aunt Lou’s.”

And her “Greek Walnut Cake” is “just like the one my grandmother used to make, and it’s a favorite dessert for my kids,” Stephan says; her recipe includes a pomegranate balsamic vinegar reduction.

The merits of olive oil in cooking are driven home by the inclusion of additional recipes by four high-profile chefs, including Bradley Ogden of Solvang’s Root 246 restaurant and Food Network regular Bill Wavrin.

Consumer education, of course, is a critical part of Stephan’s book.  She clearly defines what extra virgin olive oil means – it should contain “no more than 0.8 percent acidity” – and offers a list of flavors truly hand-crafted, quality olive oils will possess, including “grassy,” “peppercorns” and “woodsy.”  Stephan also includes a step-by-step look at how she produces her own extra virgin, first cold pressing olive oils, from tree to bottle; photographs detail everything from the harvest of her estate fruit trees to the certified organic stone mill in Petaluma that she contracts to press them.  The author also introduces the reader to the many varieties of olives she harvests and sources, like Farga, Koroneiki, Mission Manzanilla and Kalamata.  “Different varietals will give their own unique flavors to what you cook, much like pairing wine with different foods,” she insists.  “There are an infinite number of options.”

There are interesting historical tidbits sprinkled throughout, too; did you know Helen of Troy used to bathe in vinegar to relax, and that Caesar’s army drank it to avoid dehydration?

Stephan is currently working on her nutritionist certification and envisions two more books in the near future.  But for now, she’s excited about the day-to-day applications of her first publication.  After all, she says, “This country is still in its infancy of understanding how the right foods play into our overall health issues.”