(published in the Santa Barbara News-Press on July 18, 2013)
When the doors reopened at Mattei’s Tavern in Los Olivos Friday, July 19th, it marked a fresh new chapter on a historic hotspot.  As a popular stagecoach stop run by Felix Mattei, it quenched the thirst of weary travelers as far back as 1886.  Its most recent stint as a destination eatery came under the direction of brothers Jeff and Matt Nichols, who moved out last year after a decade in business to open up a now-thriving eatery just around the corner. 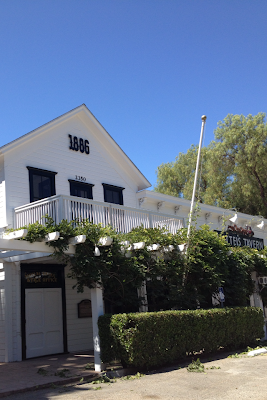 The Mattei’s Tavern story continues now with Chef Robbie Wilson and his wife and business partner, Emily Perry Wilson.   The couple, married three years, most recently lived in Nashville, where they opened four restaurants.  But a new partnership with Charles Banks, the former investment manager who runs a bevy of boutique wine brands through investment firm Terroir Capital and who just this year got final approval for a new hotel project right across the street from Mattei’s, has brought them to Santa Barbara wine country.


“We have found our forever place,” says Mrs. Perry Wilson, 40, who adds that she’s fascinated by the diversity of people – “from ranchers to film executives” – who live in the Santa Ynez Valley.


Her husband quickly continues, “We choose to live here and raise a family first, and to open a restaurant second.”


But it’s the opening of a high profile dining spot that’s certainly consumed their lives for almost a year now.  The two made the move to Los Olivos last October “to work on the concept of the restaurant,” says Mr. Wilson, 43.  They broke ground on enhancements and improvements in February of this year, with final touches taking place right through their “soft opening” tomorrow.

﻿﻿﻿﻿﻿﻿﻿﻿The pair is not oblivious to some of the buzzing concern in the community about the changes coming to a revered and highly coveted property.  So they make no qualms about their focus.  “This is all about paying homage to this property and to one of the greatest valleys in the world,” says the new chef, adding with a laugh, “We’d be morons if we changed the name of the place!”


Indeed, their attention to historical detail has been well scrutinized.  Revamping Mattei’s has meant adhering to a bevy of requests by HLAC, the Historic Landmarks Advisory Committee, which designated the property a Santa Barbara County Historic Landmark three years ago.  Doorways, fireplaces and wainscoting had to remain intact, for example.  Colors had to be approved.  And experts had to be hired to advise on a slew of restoration details.


But in the midst of jumping through hoops, the Wilsons have accomplished something impressive, especially in the way they’ve coupled historic reverence with a fresh, new, exciting take on wine country dining.

The new Mattei’s Tavern offers no less than five separate dining venues, “each with its own personality,” says Chef Wilson.  To the right of the main entrance is the bar, decked out in rich, dark hues, like the historic Essex Green on the walls.  A quaint dining alcove has been built around the fireplace, above which a ceiling mural of the Santa Ynez Valley will be painted soon.  The dinner menu will be available here, though the signature dish is a $14 hamburger, decked out with bacon marmalade and homemade pimento cheese and served on a toasted brioche bun.


To the left of the main doors is the Stage Room, where ticket holders once waited for their stagecoaches to arrive.  Now, it’s designed as a hangout for cocktail aficionados.  There are 14 old world-inspired concoctions on the menu, like “The Gov’ner,” featuring Yamazaki 12-year whiskey, toasted cardamom, agave and orange, and the “Cousin Bob Fails His Driving Test,” made with Johnny Drum bourbon, sweet Carpano Antica vermouth, sake and bitters.  All spirits are kept on a rolling cart, since all cocktails – priced at $14 – are made tableside.


The Whicker Room gives diners an open, bright place to enjoy a meal, as well as wide outside views.  The centerpiece here may be what the Wilsons call “The Table,” with seating that can be altered to accommodate groups of varying size; proceeds from dinner checks at this table will go to a local charity, which will be rotated monthly.


Outside, in the back, the “Watering Hole” plays up Los Olivos’ en plein air charms and features picnic tables with umbrellas, fire pits and bocce ball courts.   Vintage red coolers will allow diners to chill their bottles.  A wood shed, with chalkboards on the walls, will give children a place for creative distraction.  And a large wood burning pizza oven (where Chef Wilson is experimenting with avocado wood) will crank out pies to order.  (This area abuts the new Terroir Wines tasting room, which features the impressive lineup of Mr. Banks’ proprietary labels, including Sandhi, Leviathan and Mayacamas.)


Mattei’s Tavern’s brand new kitchen is an exhibition tour de force and, by Santa Ynez Valley restaurant standards, quite large.  Diners have a few special spots to sit, eat and watch the culinary action here, including a couple of counter chairs and a stunning Winemakers Table, made from a local tree by neighbor artisan Frank Palmer; area winemakers will be invited to sit here, sign in on a hanging board and open their bottles with no corkage fee.  “We want the energy of these people here,” insists Chef Wilson.


The kitchen features brand new, custom-built Viking ranges.  And a large Santa Maria-style red oak-burning barbecue grill comes complete with oversize butcher block, where “we’ll be slicing up big bone-in rib-eyes and beautiful, large rotisserie chickens,” says the chef.  “It’s our interpretation of what Mattei’s used to be.”  The butcher station will be adorned with a mural depicting Gin Lung Gin, the Chinese cook who was Felix Mattei’s original full-time chef.


The back kitchen, where the chef pipes in jazz music for his staff, features custom refrigeration units, a specialized pastry area and a cold butcher room “to break down meats,” says Mr. Wilson.


When it comes to the menu, Chef Wilson clearly designed it with the region in mind.  “All of our produce is from this valley, 80% of our proteins are from this area and all of our seafood is right from our own Pacific Ocean,” he says.  But perhaps more remarkable is the creativity and whimsy with which dishes, like these specialty platters, were created:  “Morro Bay’s Greatest Hits” ($59) features oysters, sweet shrimp and Hamachi served on a Lazy Susan-turned record player; “Felix Mattei’s Dirty Laundry” ($33) is a charcuterie selection served on a tiny clothes line; and “An Assortment of Lettuces” ($36) features local leaves presented in a flower pot and cut on to the plate at the table by your server.
To further illustrate whimsy: the kids’ menu – playfully dubbed “Anklebiters” and featuring items like cheeseburger, pasta, salmon and “Grilled Steak with a Stick Coming out the End of it!” – is printed inside a bright red, real-life Viewfinder.

Much of the menu – with starters ranging from $12-$19 and main dishes from $21-$29 – is separated historically.  Items inspired by Felix Mattei, and designated “1886,” include grilled artichoke, beef tartar, pork shank, skirt steak and wood-fired chicken.  Dishes inspired by a modern-day Los Olivos, under the heading “2013,” include Hamachi chorizo, grilled octopus, a 36-hour-cooked brisket, slow-roasted sea bass and on-the-bone Salisbury lamb.


Numerous sides, like crispy brussel sprouts and cream corn brulée, are meant to encourage diners to customize their meals. 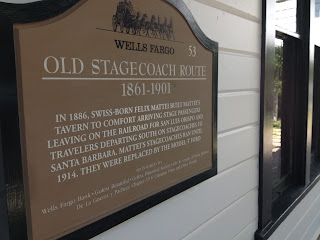 The wine list here is easily one of the most comprehensive in the area.  There are close to 20 wines by the glass and the by-the-bottle options, arranged by grape variety, surpass 200.  The lineup of vintage Champagnes includes several coveted Dom Perignon selections.  And while the focus is certainly on local wines – including celebrated labels like Ojai Vineyard, Au Bon Climat, Tatomer, Liquid Farm, and Foxen – international wine growing regions like Burgundy, Alsace, Tuscany, South Africa and Germany are also very well represented.


As the clock tick-tocked toward its grand reopening, Mrs. Perry Wilson was quick to call this very detailed culinary project a “labor of love.”  And her husband, who shies away from discussing his impressive background in this industry (which includes several high-profile restaurants, like French Laundry), focused on what’s ahead.  “We want people to come here and linger here,” he said, “because this is all about Los Olivos and a celebration of the spirit of this valley.”