By Gabe Saglie
(published in the Santa Barbara News-Press on August 29, 2013)

Brian Parks knows barbecue.  He’s made it the cornerstone of his business, after all – a roving food truck that draws crowds by doling out grub that’s tangy as it is sweet and as saucy as it is good.  When I ask him about the name speckled throughout his truck – Georgia’s Smokehouse – he tells me that it personifies “the Southern charm and girl-next-door image that we wanted to have.”

Chef Parks was the Executive Chef at Coast Restaurant inside Santa Barbara’s Canary Hotel for four years – and one of the best things the property had going for it – until the boutique Kimpton brand took it over last year.  He turned the engine on his new culinary venture-on-wheels just this past March.  But, with a tasty blend of culinary prowess and approachable food, he’s quickly enticed a following, especially in the local wine scene. 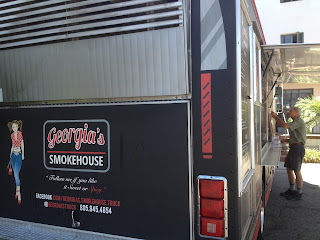 “We do go to several wineries for weekly stops,” he says.  “We stop at Carr, Pali, and AVA Santa Barbara [in Santa Barbara’s Funk Zone] on a regular basis and have visited Bridlewood, Longoria, Fess Parker, Kalrya, Sunstone, Coghlan, and Koehler for special events.”

Suffice it to say, pairing wine to barbecued food is not necessarily intuitive.  Flavors are pronounced and diverse, and the sides that complete a great barbecue meal add myriad layers of tastes and textures.  Parks, himself, admits that the perfect wine match “really depends on the style of BBQ.  Our Southern style has more acid and spice.  I have found that pinot noirs and zinfandels go really well with it, even a fruity and crisp sauvignon blanc.”

When he’s enjoying his own fare, Parks confesses that he’s partial to pinot by Carr Winery’s Ryan Carr, which “pairs nicely with the spice on the ribs.”

I was thinking lunch, not wine, when I and my two boys – Gabriel and Greyson – approached the order window last week.  Our choices hit the spot.  But, after the crowds had dispersed to enjoy their own tastes of Southern hospitality, they also gave me a chance to explore wine options with the man behind the grill. 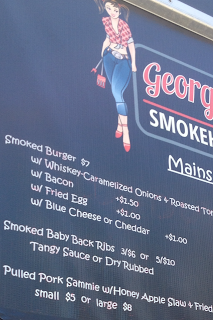 The Georgia’s Smokehouse burger is like a canvas, in that it allows patrons to get creative with their own add-ons, from bacon to fried egg; we chose smoked cheddar in all its melted glory.  “We use a third-pound patty and season it with kosher salt and smoked black pepper,” he says.  “Every burger starts with whiskey-caramelized onions and herb-roasted tomatoes on a toasted brioche bun.”  My own match for this would be a juicy red, like a grenache on Mikael Sigouin’s Kaena label or the Hitching Post Hometown pinot by Gray Hartley and Frank Ostini.  But Parks’ pick strikes me as refreshing: “I think a nice, stainless steel-aged chardonnay might work with this because of the herbs and onions on the burger,” he suggests.

The Brisket Sandwich was hearty and flavorful, and the beef was sumptuously tender, cradled by a roasted brioche hoagie roll.  Parks smokes the meat over hickory wood for up to 12 hours before it’s set to rest overnight, trimmed off the fat and then rubbed with proprietary BBQ spices.  It's topped generously with coleslaw – red cabbage, thyme, caraway seeds, red wine vinegar and salt – and crowned with homemade BBQ sauce.  “It has some spice, a little smoky flavor and that great meaty texture,” says the chef.  “I would think a rich cabernet or maybe an old-vine zinfandel would hold its own with brisket and sauerkraut.”

If we’re talking favorites, I pick the Pulled Pork Sammy.  Boneless pork shoulder is seasoned with Parks’ BBQ rub, hickory-smoked for six hours and baked with a touch of BBQ sauce for another two.  Once it’s shredded, it snuggles into that toasted hoagie roll along with coleslaw – this one’s made with green cabbage, carrots, Brussels sprouts, Granny Smith apples and an apple cider vinegar-oregano dressing – and crispy onions.  Delectable.  And it “goes best with a pinot noir,” according to Parks.

I agree, especially if it’s a nuanced pinot with natural fruit and earth flavors by the likes of Drake Whitcraft or Byron’s Jonathan Nagy.

Yet, this sandwich has me thinking of a dry riesling by Graham Tatomer, too, with its elegant flavors, shapely frame, mineral overtones and generous dose of acidity.  Or a glass of rosé sparkling wine by Flying Goat Cellars’ Norm Yost, with bouncy berry flavors that lead the way to an effervescent finish. 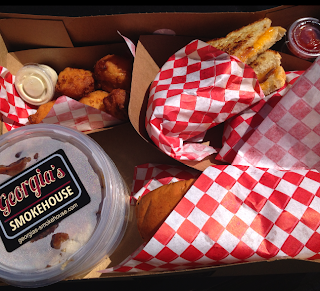 And therein may lay the key to matching those varied barbecue flavors in the first place – in experimentation and in the willingness to put up several wines to food that’s as satisfying to savor as it’s fun to eat.  Just make sure you’re starting out with really good barbecue.

Georgia’s Smokehouse has a concise menu, and each item’s a sure bet; the pillowy bacon-and-cheddar Hush Puppies and the Grilled Cheese Sandwich with smoked cheddar and bacon are also standouts.  Specials are often featured depending on the stop.  A three-week schedule of upcoming stops is kept on its web site – www.georgias-smokehouse.com – and updated on its Twitter and Facebook pages.
Posted by Gabe at 5:35 PM