By Gabe Saglie
(published in the Santa Barbara News-Press on September 15, 2011) 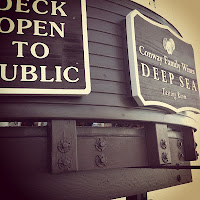 “Wine is an aesthetic experience,” Gareth Conway tells me as we both lean over the railing of his family’s brand new wine tasting room on Stearns Wharf.  And I have to agree, instantly.  I mean, the views from the second floor facility are breathtaking: 360-degree sights of the Santa Barbara Riviera, the palm-lined lawns of Cabrillo Blvd., the Channel Islands, the Santa Barbara Harbor and glistening water as far as the eye can see.

“What I love about this view us that it’s constant but ever changing,” he continues.  And he adds, as he gestures towards kayakers skimming past incoming sailors with a hand holding a shimmering glass of sauvignon blanc, “the boats give it personality.”

The ocean has long been fascinating for Conway and, he says, his entire family.  They’ve always loved the beach, many of them are certified SCUBA divers and some of his siblings are pretty accomplished paddle boarders.  It’s why they named their winery Deep Sea.  The fact we’re now standing here, a few dozen feet above the water, with snorkeling sea lions and soaring pelicans well within our sights, is mere serendipity.

“We always thought that a spot on the water would make sense for a tasting room and then, one day, we hear that a space on the Wharf had come up,” he tells me.  Other wine tasting rooms have been housed here in the past.  But as far as I’m concerned, they were never as serious or accomplished an operation as this one.

As we chat, an employee comes up the steps from the touristy shopping maze below and cheerily greets her boss, “Hello, captain.”  Apropos, since the deck has been totally revamped to resemble the bow of a modern catamaran, with stained wood panels and floors whose color mirrors the sand on the beach just a few hundred feet away.

We soon move inside, where the décor is decidedly simple and uncluttered.  A few retail items, large sepia photographs of the Conway family and their estate vineyards, a communal tasting table and chairs designed by Conway and his brother, Tom, and plenty of open window space showcasing more of that awesome view.  The tasting bar is seeing steady foot traffic; a handful of tourists, even a well-known local winemaker who’s come to introduce himself and to check out the friendly competition.  A couple has purchased a bottle and is making their way outside to sit and sip in the breeze.

The allure of the tasting bar lies, in large part, with the wine flights that feature reds and whites from the Conway family’s two labels.  Deep Sea sources fruits from cool-climate vineyards along the California coast, from Santa Barbara to Monterey.  Rancho Arroyo Grande pulls fruit from three vineyards located on the family’s own 3400-acre property located about a dozen miles from the ocean in the Arroyo Grande Valley and bordering the Los Padres National Forest.  This plot of land, planted to a total of 10 grape varieties, is historic, having been recorded as a Spanish land grant in 1842.  The Conways bought it the year they started their wine business – 2007 – and discovered a wealth of mineral-rich and fossil-laden soils.  “It was all once underwater, and when the mountains lifted, they brought up all this sea life,” Conway says.  “I’ve pulled up football-size abalone shells with the weight and feel of marble.”  Slabs of earth from the property swathed in seashell imprints are on display throughout the tasting room.

Patrons can choose from four different flights, including an all-white lineup featuring three wines for $5, an all-red bill with three pours for $8 and the Reserve Flight of six of their best wines for $20.  Conway and I are making our way through the six wines on the Introductory Flight, which costs $10.  The 2008 Deep Sea chardonnay displays wonderful minerality, with bright pear up front and a clean finish.  The 2008 Deep Sea viognier displays great depth, with tropical fruit notes and rich spice.  I’m especially (and very pleasantly) surprised by the 2008 Deep Sea sauvignon blanc; unlike more typical version of this wine, there’s less grassiness here and more herbaceous elements, plus what comes across as – no joke – a streak of jalapeno, all tempered by a healthy dose of acidity.  A balanced but complex wine that seems especially meal-friendly and which is certainly worth investigating. 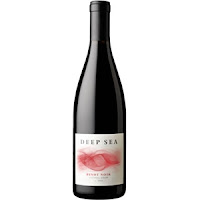 The 2008 Deep Sea Central Coast pinot noir offers a supple mouth feel and rich notes of dark berries.  The 2008 Rancho Arroyo Grande zinfandel is a delicious treat; classic, sumptuous zin jamminess topped off with an elegant, rich finish.  And the Rhone-inspired Deep Sea Red – a bold, round, intense wine which tasting room manager Brandi Rosander proudly lauds as their flagship red as she pours into my glass – is a blend of five grapes: syrah, petite sirah, lagrein, merlot and mourvedre.  The wine has won seven gold medals in the last year.

As we sip, Conway tells me blends are key to their brand.  “There are amazing single-vineyard wines out there, but they’re not always for everyday drinking,” he says.  “Blending allows us to raise the experience in the glass and it makes wines more accessible, both in drinkability and price.”  He also credits much of their young wine company’s success to their winemaker, Jonathan Medard.  The Frenchman from Epernay, both of whose parents are winemakers themselves, worked at landmark labels like Champagne Louis Roederer and Chateau Mouton Rothschild before landing a stint at Newton Vineyard in Napa and, eventually, Conway Family Wines.  “It was extremely important to find someone who shared our vision to make restrained wines with a European style,” he tells me.

The Conways make their wine at the co-op Central Coast Wine Services in the Santa Maria Valley, where they lease and exclusively manage 20,000 square feet which they’ve outfitted with their own equipment.  That gear includes a few dozen state-of-the-art tanks imported from Italy and Slovenia (and individually named after planets and famous explorers).  They’re outfitted with blades that periodically scoop out seeds to control tannins, probes that display real-time readings of the sugar and alcohol content of the wine fermenting inside and digital units that allow the winemaker to electronically program things like punch downs, among other fancy accoutrements.

Much of the appeal of this wine venture, of course, is the family angle.  This is, at its core, a family operation.  At the helm are Ann and Chris Conway; he co-founded Mentor Corporation in 1969 and served as the lucrative Goleta-based surgical products company’s CEO for 25 years before retiring in 2004.  The Conways live in the Northeast now but (understandably) spend much of the winter season in their former Santa Barbara home.  They have five children, three of whom – Tom, Gillian and Gareth – now spearhead the family wine business.

Last Friday, the day of my visit to Deep Sea, marked the tasting room’s ninth week in business.  But its official grand opening is tonight, slated from 4-7pm and featuring a ribbon cutting with Santa Barbara City Mayor Helene Schneider.  If you miss it, keep in mind current tasting room hours are noon to 8pm, seven days a week.

And sure, you can find more information by logging on to www.conwayfamilywines.com.  But you can only get a gander at that view – something tourists discover daily but which locals often forget to take time to seek out and enjoy – by visiting in person.  They’ll even validate your Stearns Wharf parking ticket for 90 minutes.
Posted by Gabe at 11:18 AM