(published in the Santa Barbara News-Press on September 22, 2011)

“I really love Thanksgiving,” says Chef Bradley Ogden, as he sits in the dining room of his Root 246 restaurant in Solvang and leafs through the pages of his upcoming culinary tome, Holiday Dinners with Bradley Ogden.  “It’s always been a favorite time for me to cook, certainly in the restaurant, but also on a very personal level.” 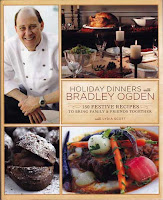 Ogden’s first cookbook in two decades is set for release on September 27th and is a deliberately designed, thoroughly explained and beautifully photographed guide for the average cook through three of the most daunting meals of any year: Thanksgiving, Christmas and New Year’s Eve.

“I’m a traditionalist,” he continues.  “To me, the holidays equal family and friends, and food transcends.  It’s timeless value.  You touch people with what you do in the kitchen and what you give them to eat.”

If that’s true, Ogden has been touching people for decades.  The honors graduate from the Culinary Institute of America worked at the famed American Restaurant in Kansas City – “It’s where I began to focus on the American heritage of food,” he says – before gaining acclaim in the mid-1980s as head chef at San Francisco’s renowned Campton Place Hotel.  In 1989, he opened his first restaurant, the Lark Creek Inn, which soon became one of the Bay Area’s most celebrated eateries.  He would go on to become one of the country’s most prolific restaurateurs, running hot spots like One Market Restaurant in San Francisco, Parcel 104 in Santa Clara and Arterra in San Diego.  Today, Ogden is chef and co-owner of the Lark Creek Restaurant Group’s eight eateries and his celeb-friendly namesake property at Caesars Palace in Las Vegas, which won the James Beard Foundation’s “Restaurant of the Year” honor in 2004.  He opened Root 246 at Hotel Corque in Solvang in 2009.

Throughout his career, Ogden says he’s managed to translate to each of his dishes his singular mantra: organic and local food must prevail.  “The farm to table concept is nothing new for me,” he says.  He traces his culinary roots, actually, to his upbringing on his family’s farm in Michigan, where he recalls his grandmothers’ and own mother’s cooking very fondly; his new book is dedicated “to Mom with love.”

“We picked our own corn, caught our own fish, and harvested tons of root vegetables when it got cold,” he says.

In the foreword to his new book, he writes, ““There is no exception to my love of all things fresh from the farm.”  He continues, “There is nothing more flavorful than the simplicity of a farm-fresh egg or a trout taken from an icy creek and placed directly into a sizzling frying pan.”

Holiday Dinners with Bradley Ogden is a collection of 150 recipes that each hinge on the use of fresh, local, available ingredients.  Ogden is unwavering in his encouragement of it, pointing to what he describes as “the ethics” of cooking.  “You’ve got to know exactly what goes into everything you’re eating,” he insists.  In a section of his new book in which he explains his insistence on the freshest of ingredients, he writes, “Organic and local food not only tastes better, but it also benefits farmers, animals, the environment and your health.”

In fact, he describes his new hardback as a lifestyle cookbook.  “It’s a lot about my life, what I eat and how I do it,” he says, “with some creative edges, of course.”

Ogden has crafted three main chapters, each one focusing on the three big holidays.  And his personal inventiveness is evident in the most traditional of dishes.  His Thanksgiving lineup includes his signature recipe for sage butter-roasted turkey (fresh sage, Dijon mustard and lemon zest make an appearance) and several bird-inspired alternatives, like wood-grilled turkey chop with wild mushroom gravy, red curry turkey scaloppini and leftover turkey hash.  For cooks looking for something meatier, Ogden features savory options like braised short ribs with onions and sugar pumpkin and wood-grilled butterflied leg of lamb.  All the conventional accoutrements are included, too, all with that distinguishable Ogden flare, including a corn and sage stuffing, a sweet potato gratin and roasted harvest squash soup.  To fill the sweet spot on the Thanksgiving menu, Ogden offers his take on classic pumpkin pie – “my favorite all-time food,” he writes – jellied cranberry sauce and apple crumb pie.

What makes one of the most important meals of the year that much more approachable for the at-home chef are the author’s very practical suggestions and off-the-cuff food for thought, which are interspersed among recipes and photos.  On a page dedicated wholly to choosing and cooking the turkey, Ogden recommends only “fresh natural, organic, free-range turkeys from small regional producers, as they will have the best texture and flavor.”  Among his techniques for maximizing flavor and texture, Ogden calls for a V-shaped pan because “it holds the turkey in position during roasting” and because it keeps the bird elevated, “allowing air to circulate and promoting even cooking and browning.”  He also suggests flipping the bird over halfway through to protect the breast meat and avoiding basting in the last hour of cooking to ensure crispy skin.

To help the reader carve the turkey – an intimidating task for any dinner host – he recommends letting the bird rest for 30 minutes first, and then, “with the turkey breast side up, begin with the legs”

Ogden's suggestions continue to the actual prep before dinner guests arrive.  “Decorate your table with simple flower arrangements and sliced seasonal fruits set on clear bowls filled with water,” he writes.  He also urges the use of name cards so guests know where to sit and small white Christmas lights “for a sparkling backdrop.”  For the hostess seeking practical rules of etiquette: ”Place a nice folded linen napkin to the left of the forks for formal occasions or on top of the plate for less formal gatherings.”

The book’s Christmas chapter features its own share of classic comfort foods, including a braised lamb shoulder with butter beans, a coffee-spiced rib roast and grilled Cornish game hens with spicy cherry rub.  He expresses special fondness for his candied yams – “One of my faves,” he says – which features a spicy profile of cinnamon, allspice, kosher salt and black pepper.  His popular takes on eggnog, winter citrus punch with spice pomegranate ice and chocolate brioche pudding aim to please any sweet tooth.

This section also features a personal note on wines, which his son Bryan, also an accomplished chef, helped prepare.  The wide range of diverse flavors on any holiday table can make wine selection tricky, so Ogden makes general suggestions.  His red of choice is pinot noir.  “Since it is a light wine with savory, earthy notes, it complements many foods,” he writes.  Fruit crispness that cleanses the palate makes pinot grigio his preferred white wine, and he declares that sparkling wine “elevates any meal to a special affair.”  The younger Ogden’s specific wine suggestions for several dishes are found throughout the book.

A page dedicated to the use of fresh herbs includes sensible tips: “To revive limp herbs, trim ½-inch of stems and place the whole herb in ice water for an hour."  And the author offers a list of recipes that, inspired by his own childhood memories, he says would make ideal gifts to bring to any holiday dinner, like spice plum BBQ sauce, banana blueberry bread and espresso double-chocolate soufflé brownies.  “I can always enjoy gifts I can eat,” Ogden says.

For the New Year’s feast, Ogden shares another personal favorite, blue corn cakes with caviar and crème fraiche, along with his recipes for Yankee Pot Roast, sole fillets with citrus brown cutter and a leek and sweet potato risotto.  He also includes some of his favorite countdown cocktails, like blood orange mimosas and mango-pineapple margaritas.  But his most popular may be his “Eye-Opening Blood Mary,” which he mentions in a special section on hangover remedies.  “When your head is spinning and you’ve definitely overindulged, you need to take serious measures before going to sleep to stop the hangover before it starts,” he writes.  The popular morning sipper, he says, forces your body to process new alcohol, thereby giving it a break from the toxic effects of the booze you’ve already consumed; a temporary but effective fix, he calls it.  He also calls for drinking plenty of sports drinks to replace electrolytes and taking a shower that alternates between hot and cold water.

Each of the main chapters concludes with a common sense timeline aimed at helping the at-home cook plan and organize their dinner party.  The Thanksgiving section, for example, suggests ordering your fresh turkey three weeks out, making the jellied cranberry sauce one week ahead and prepping the corn and sage stuffing the day before the big feast.  Each chapter also includes four sample menus to match individual lifestyles and personal holiday realities, like an “Intimate Christmas Dinner for 2” menu and a four-course “Football Dinner Party” menu for New Year’s Day.

Among the book’s most attractive attributes are the lush, vivid snapshots by Solvang-based photographer Jeremy Ball.  “And they weren’t staged,” says Ogden.  “They’d come out of the oven, into my hands, and it was like, ‘Okay, take the picture!”  The photos were taken over five days this past January at the Santa Ynez home of Maria Murdock, daughter of the late Rosemary Clooney.  And for Ogden, they were intrinsic to the book’s allure, since “recipes are the template and the rest is show-and-tell.”  To that end, Ogden already has plans in place to develop visual media, like a DVD and YouTube videos, to accompany his new book.

Holiday Dinners with Bradley Ogden is being published by Running Press and is already available for pre-order through Amazon.