By Gabe Saglie
(published in the Santa Barbara News-Press on September 26, 2011)

Winemakers have a take it-or-leave it relationship with grape seeds.  In some wines – think big reds – they can impart notable tannins, that muscle that often makes wine chewy, food-friendly and age-worthy.  But in other wines, seeds are best left by the wayside; and even when they’re used, they’re usually discarded quickly.  But where winemakers often see scrap, one couple saw beauty.  And those same tiny grape pits – which they would go on to use in a niche line of products – would become their seeds for success.

The story of the Grapeseed Company actually begins in the year 2000, when Kristin Fraser Cotte and her fiancé Peter decided to explore the world by boat.  They outfitted a 30-foot sailboat and left their native Boston for the far warmer waters of the Caribbean.  “We knew that the area is home to more than 500 islands, but that less than a couple dozen would have any stores,” Cotte recalls.  “So I bought a book on how to use oils and food grade ingredients to make bath and body products for our own use onboard.”  She sourced mostly coconut oil from their various ports of call.  And throughout their journey, they sustained themselves, living off plenty of rice and beans, growing sprouts on their vessel and diving regularly for fish.  Aside from a short stint back to Boston during hurricane season, the couple spent two years living sensibly on the high seas.

With their seafaring ways behind them, the couple moved to Santa Barbara in 2002.  They sought out a place to live where they could pursue their graduate school careers in teaching and surf readily.  Theymarried here shortly after their move.

But Cotte’s daily routine on that sailboat – making bath and body products from natural ingredients – soon turned to nagging inspiration.  “For two years, I kept mulling over in my head if I could turn this into a business,” she remembers.  And all it took was her husband’s fortuitous bike ride through the Santa Ynez Valley to turn musing into reality.

“He noticed that winemakers were throwing away the grape seeds,” Cotte says.  “They were either throwing them into their mulch or paying trucks to haul them away.”  And what a waste, she thought.  After all, “seeds are the richest part of the grapes, when it comes to vitamins and antioxidants like resveratrol.”

And so a business idea took root and began to bloom.

In 2004, the Grapeseed Company was born.  It started as an online and wholesale business, featuring products handmade by Cotte and her husband.  She was an elementary school teacher back then; armed with a master’s in special education, she was working with kids with learning disabilities at schools like Mountain View, Kellogg and El Camino.  “So I was concocting lotions and potions at home.”  After three years of splitting her time between teaching part-time and focusing on her start-up, Cotte turned to her business full time.  It wasn’t until a year ago this month that the company’s retail store opened its doors in downtown Santa Barbara, a destination shop for everything from body lotions to scented candles and baby products to dog washes on the corner of Carrillo and De La Vina.

“Peter is the CFO,” she explains as she sits amidst her hand crafted merchandise.  He’s a teacher at Carpinteria High School, so “he’s a big help during the summer, but he’s a lot more tied up come September.”

So most of the Grapeseed Company’s wares are made by Cotte and her two employees.  Their work stations are tucked away in the back of the store and see a buzz of handiwork most days of any week.

“Wholesale is still the main part of the business,” Cotte says, “and most of our sales are still through our web site.”  Her line is distributed in close to 35 states, as well as in Canada and in the United Kingdom.  And multiple revenue streams have been critical to success, especially in the last few years, when retail combined with wholesale and private label accounts have helped pad profits.  “Private labels, actually, are what have helped us get through the recession,” Cotte adds, “and we’ve seen growth every year since 2008.” 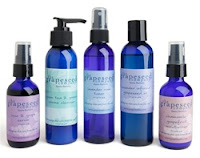 The Grapeseed Company customizes product lines for myriad businesses.  They follow a cash-minimum, not a product-minimum, model, so they are able to fulfill orders for even small, start-up businesses.  For the spa at Vino + Therapy Studio in Atascadero, they produce and custom-label a champagne grape seed and sugar scrub, as well as a facial toner.  For the Allison Inn & Spa in Oregon’s Willamette Valley, they formulate numerous spa treatment products from grape seeds sourced from surrounding vineyards.  Other regular clients include boutique businesses in Napa and Calistoga.  Locally, wineries like Summerland and Oreana carry Grapeseed Company products, too.

What’s more, their focus on local production (“It would be cheaper to manufacture things elsewhere,” Cotte admits, “but it would go against what we’re about.”) and the use of as many local ingredients as possible – like grape seeds, honey, lavender and citrus rinds – has even forced them to pass on bulkier commercial accounts.

The downtown Santa Barbara store features a speckled line of goods (and the air smells delectably at all times).  The best sellers include body lotions and face cleansers, whose natural colors come from the seeds blended in during production.  And there’s a repeat clientele for the wine soaps – red ones made with syrah seeds, white ones made with chardonnay seeds – with the actual seeds swirled in.  Seeds from pinot noir, zinfandel ad cabernet sauvignon are also readily used in Cotte’s products, sourced mainly from wine regions in California, including Santa Barbara County, and Oregon.

Perhaps the store’s biggest draw is the scent bar, a creative station where customers can design and make their own products.  It houses more than 70 fragrances and scents; test strips allow for creative experimentation.  And the list of make-your-own wares includes perfumes, bath and massage oils, hand and body washes, bath salts, body butters and reed scent diffusers for the home.  Products, including custom labeling (you can name a lotion after your wife, if you’d like), are tailor made onsite and on the spot.  Only the custom candles require a week-long turnaround.  “Of course, we also have our line of six candles you can choose from,” Cotte adds.  “When the wax melts, you can use it as massage oil.”

And to drive the green angle of their business home, she adds, “and if you bring the packaging back, you get $4 off your next purchase.”

To that end, consumers also have access to the store’s refill station, featuring many of the store’s popular products in oversized containers.  “You can bring your bottles and fill them back up,” Cotte says, “and you can save up to 20%.”

Affordability, actually, has been a predominant facet of the company.  Those modish wine soaps cost around $7.  “We’re technically a luxury item, but we’re also both teachers, so we wanted to make what we do affordable,” Cotte says.

The Grapeseed Company hosts group parties onsite – think bachelorette bashes – featuring create-your-own lip balms, candles and massage oils.  It’s also expanded to include a diverse home products line, as well as a men’s line and a baby line, all made with predominantly organic ingredients.  And as a playful five-year-old black lab barks to greet an incoming customer, Cotte adds, “Oh, this is Surf, a rescue from the shelter.”  More than a furry greeter, he’s also a mascot, appearing on the labels of the store’s organic dog washes and fur fresheners.

Vinotherapy for everyone.
Posted by Gabe at 12:30 PM